While trading is positive in the early going ahead of Wednesday's Fed interest rate decision, we believe the charts and market breadth need improvement to suggest demand has finally overpowered supply.

Some of the data are suggesting the potential for a near-term bounce although this would occur within negative trends. And as forward 12-month earnings estimates for the S&P 500 continue to lift, the rise in the 10-Year Treasury yield continues to put pressure on the S&P's forward fair value multiple even though the S&P's forward P/E is currently trading at a discount to fair value. 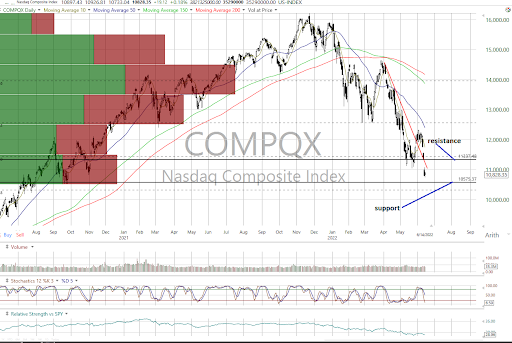 The major equity indexes closed mixed Tuesday with the Nasdaq Composite (see above), Nasdaq 100, and Dow Jones Transports posting gains as the rest declined. Yet said gains were insufficient to alter any of the near-term bearish trends that currently exist on all the charts.

Meanwhile, cumulative market breadth remains negative for the All Exchange, NYSE and Nasdaq.

And while the stochastic levels are quite oversold across the board, no bullish crossovers have appeared.

We believe the current trends should be respected until there is sufficient improvement in trend and breadth to assume demand has taken control over supply.

All the McClellan 1-Day Overbought/Oversold oscillators are oversold with the NYSE very oversold and suggesting a bounce (All Exchange: -87.64 NYSE: -116.02 Nasdaq: -68.86).

The percentage of S&P 500 issues trading above their 50-day moving averages (contrarian indicator) stands at 5% and well below the 25% trigger line, remaining bullish.

The Open Insider Buy/Sell Ratio increased to 69.1 as insiders did some buying, staying neutral.

On the other hand, the detrended Rydex Ratio (contrarian indicator) at -1.94 remains in bullish territory as the leveraged ETF traders are still highly leveraged short. 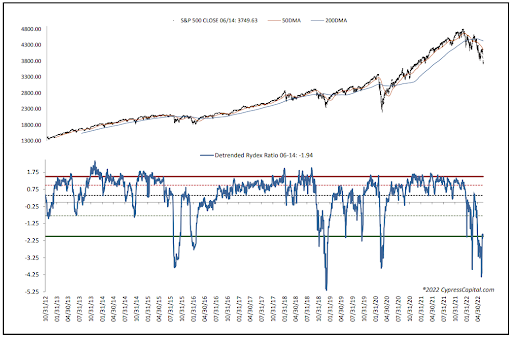 The Investors Intelligence Bear/Bull Ratio (contrary indicator) also remained on a very bullish signal and still near a decade peak of fear at 40.0/35.72. We repeat, only twice in the past decade has bearish sentiment been this extreme, both of which were coincident with market bottoms.

A positive open and the data imply a bounce as valuation has been very compressed over the past few months. However, the Fed decision typically creates volatility around its announcements. So, while tempted to be more optimistic, we have yet to see enough evidence that the demand side of the equation has strengthened enough to overpower the recent abundance of supply.

Get an email alert each time I write an article for Real Money. Click the "+Follow" next to my byline to this article.
TAGS: Federal Reserve | Indexes | Markets | Stocks | Technical Analysis | Trading | Treasury Bonds | U.S. Equity