Once again, a positive open for the markets Thursday succumbed to heavy selling pressure near the end of the session, leaving all in the red and at or near their intraday lows. The charts saw several of the indexes violate their near-term support levels and now find all in near-term downtrends -- with one exception.

Cumulative market breadth continued to weaken and remains negative while the data has yet to send signals suggesting a positive turn is likely in the cards. 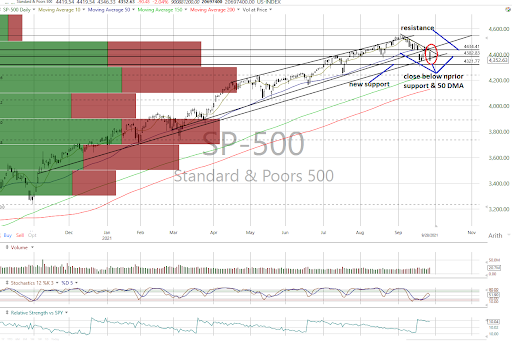 All the major equity indexes closed lower Thursday as early strength gave way to late-session selling with all closing at or near their intraday lows.

The S&P 500, DJIA, Nasdaq Composite, Dow Jones Transports and MidCap 400 all closed below their near-term support levels, leaving all the indexes in near-term downtrends except the Value Line Arithmetic Index, which is neutral.

Thursday's weakness did nothing to stem the deterioration of market breadth as the cumulative advance/decline lines for the All Exchange NYSE and Nasdaq moved lower, remaining negative and below their 50-day moving averages.

No stochastic signals were generated. However, the Nasdaq Composite and Nasdaq 100 stochastic readings are -2 and deeply oversold but have not generated bullish crossovers at this point.

The Rydex Ratio (contrarian indicator), measuring the action of the leveraged ETF traders, rose to 0.91 but remains neutral versus its prior bearish implications as the ETF traders slightly increased their long exposure.

The Open Insider Buy/Sell Ratio, however, is still neutral and unchanged at 32.3.

This week's contrarian AAII Bear/Bull Ratio (35.23/30.4) and Investors Intelligence Bear/Bull Ratio (22.3/47.1) (contrary indicator) both saw a drop in bulls. They remain neutral but have suggested the crowd was starting to get nervous.

The forward 12-month consensus earnings estimate for the S&P 500 from Bloomberg is $206.38 per share and has been declining over the past few weeks. As such, the S&P's forward P/E multiple is 20.9x with the "rule of 20" finding fair value at approximately 18.5x.

While we remain on the outlook for evidence to appear that would suggest the current correction has likely reached its climax, none has been presented via our discipline thus far. As such, we continue our near-term macro-outlook for equities as "neutral/negative."

How Do You Play Gold and Silver, Bitcoin and Ethereum? Here's What I Do

I'm not a naysayer, though I do know where my physical gold and silver are when the lights go out.