While we are once again seeing positive trading action Wednesday morning, we have yet to see evidence of bottoming signals being generated.

Early session strength Tuesday dissipated throughout the session and selling pressure near the end of the session was strong enough to keep the sellers in control.

The index charts all remain in near-term downtrends while market breadth has yet to show any notable improvement from its current weak condition. 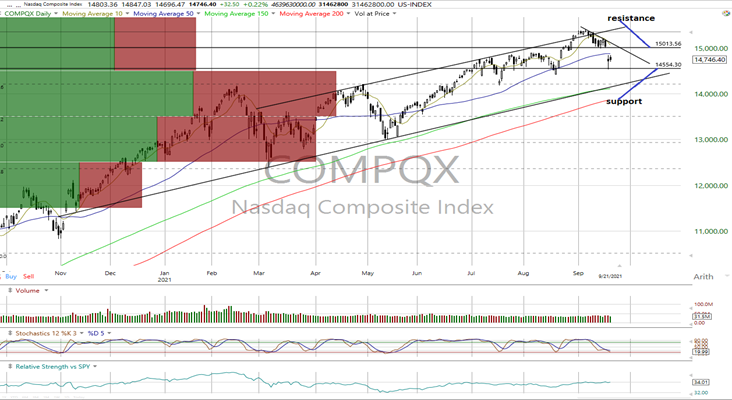 The major equity indexes closed mostly lower Tuesday with slightly positive internals on the NYSE and Nasdaq as trading volumes dropped from those of the previous negative session.

Only the Nasdaq Composite (see above), Nasdaq 100 and Russell 2000 managed to end in the green as the rest declined as the strong market opening succumbed to selling pressure throughout the session.

No technical events of importance were generated, leaving each of the indexes in near-term downtrends and below their 50-day moving averages.

The slightly positive tilt in the session's market internals was insufficient to alter the current downtrends for the cumulative advance/decline lines for the All Exchange, NYSE and Nasdaq as they also remain below their 50 DMAs.

We have yet to see what we would consider to be bottoming signals among the charts and A/Ds.

The McClellan 1-Day Overbought/Oversold Oscillators now find only the NYSE oversold with the rest back to neutral (All Exchange: -40.75 NYSE: -58.19 Nasdaq: -28.9).

The Rydex Ratio (contrarian indicator), measuring the action of the leveraged ETF traders, dipped to 1.04 and is now mildly bearish as the ETF traders have eased up on their leveraged long exposure to some degree.

The Open Insider Buy/Sell Ratio dipped to 37.4 and remains neutral.

The forward 12-month consensus earnings estimate for the S&P 500 from Bloomberg lifted slightly to $206.85 per share. As such, the S&P's forward P/E multiple is 21.0x with the "rule of 20" finding fair value at approximately 18.7x.

The 10-Year Treasury yield rose to 1.32% and remains within its current trading range with resistance at 1.4% and support at 1.23%.

Tuesday's optimistic start ended in a whimper as selling pressure remained largely dominant. With the charts and data lacking any important signs of a near-term bottom being established via our discipline, we are forced to maintain our near-term "neutral/negative" macro-outlook for equities until enough evidence is gathered to suggest otherwise.