By STEPHEN GUILFOYLE Mar 15, 2022 | 07:25 AM EDT
Stocks quotes in this article: S, SMAR, AXP, XLF, XLE, PFE, MRNA, BNTX, JNJ, LMT, NOC
The Monday session, in retrospect, was not an uplifting session by any means.
At first glance, one might think that we've seen worse, and they'd be correct. Heck, the Dow Industrials, being as narrow an index as it is, even gained one point on the day, as American Express ( AXP) scored a 2.91% increase. Somehow four of the 11 S&P sector SPDR ETFs shaded green on Monday, led by the Financials ( ( XLF) ), which were up 1.26% on weakness across the spectrum of U.S. Treasury securities. The Energy ( ( XLE) ) sector gave up 2.99% on Monday, as WTI Crude sold off hard, and continued to sell off overnight. I see a $96 handle (per barrel) on front-month WTI futures as I bang out this morning note.
The spread between the yields of the U.S. 3-Month T-Bill and the U.S. 10-Year Note has quickly made like the past month never happened as the selling has been sharp from the short end out to the long.

Back to equities with a focus on our broadest large-cap indexes that in turn are tracked by a far greater percentage of passive capital flow. Both the S&P 500 and Nasdaq Composite (and by extension, the Nasdaq 100) suffered significant technical damage on Monday. The Nasdaq Composite not only took out the Feb. 24 intraday low of 12,587, the index closed at 12,581. 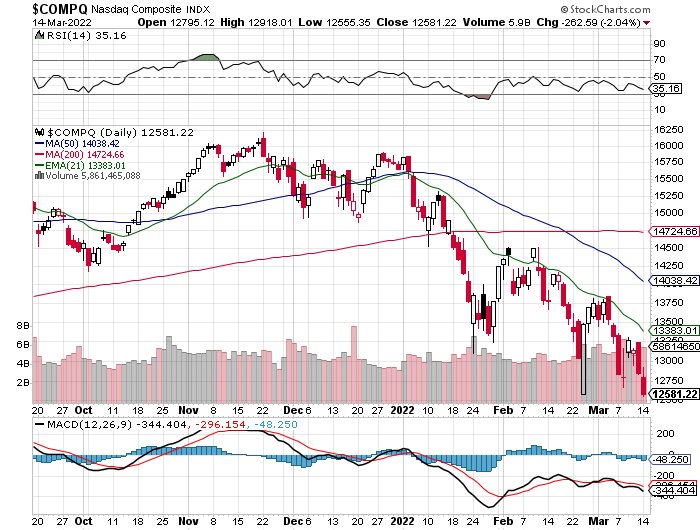 Though many of you might have known it for a week or more, this, from a technical perspective, effectively ends the attempt to rally this index that began with that Feb. 24 high-volume intraday reversal. The Nasdaq Composite now stands down 19.58% year to date, and 22.4% off of its November 2021 high. The same condition extends to the Nasdaq 100, only with no financial stocks, and a greater focus on tech, where performance is even worse.
To be sure, the S&P 500 "only" surrendered 0.74% for the session, and has not yet seriously tested its Feb. 24 intraday low of 4,114. That said, down 12.44% year to date, and off 13.4% from its Jan. 4 high, the S&P 500 did suffer that "death cross" that we mentioned 24 hours ago as a possibility for early this week.

For the newer kids, the "death cross" is a term used by investors to describe a chart where the 50-day simple moving average (blue line) crosses below the 200-day SMA (red line). This is seen by many as a bearish indicator. It does not always work, but can cause a market-wide (or stock-specific) reaction if conditions are right.
Note that the Nasdaq Composite suffered a "death cross" back in mid-February and what happened after that is now clear to see. Still, for the newer kids, if and when the 50-day SMA crosses above the 200-day SMA, that is known as a "golden cross" and is considered to be a bullish signal.

There are more than a couple of forces pressuring financial markets early this week. The first among them would be Russia's ongoing invasion of Ukraine.
Markets had opened strong on Monday as "hopium" prevailed briefly as the two sides appeared to be talking constructively. Those talks apparently sputtered out inconsequentially, however, and markets reacted with disappointment as Russian forces continued the bombing of civilian targets inside Ukraine.
Now, it seems global sanctions will further pressure the Russian economy, the Russian government edges toward probably default maybe as soon as Wednesday, and Russia threatens to cut off global exports of grains. Does the Kremlin, unable to participate broadly in global commerce, turn back toward trying or having to internally manage its breaking economy? There are no good outcomes either globally or for Russia outside of a best-effort reversal of what has already happened.
This is where attention turns to China.
Covid has re-emerged in China, and Beijing has reacted with lockdowns now in several cities, including the manufacturing hub in Shenzhen and the commercially significant city of Shanghai. In addition, U.S. and Chinese government officials met in Rome on Monday, and held what was termed a "substantial discussion" that produced no outcomes nor agreements.
China is involved here because Beijing has refused to take action against or condemn Russia's invasion, and Russia has allegedly asked China for military aid in the form of providing armed unmanned aircraft. China denies being asked. Russia denies having to ask. That and $2.75 will get you on the New York City subway.
Last, but from a markets' perspective probably not least, is the FOMC policy meeting that goes into session today and culminates on Wednesday afternoon. This will result in an almost certain 25 basis point increase being made to the target range for the fed funds rate and at least the start of the removal of liquidity from the monetary base as the Fed starts what will (hopefully) be a multi-year program (quantitative tightening) designed to ultimately greatly reduce the size of the central bank's balance sheet.
Futures trading in Chicago are now pricing in a more than 98% probability of that 25 basis point rate hike on Wednesday, and a majority chance that the range for the fed funds rate stands at 1.75% to 2% by year's end, suggesting a total of seven (what has become standard, but does not have to be) 25 basis point increases for calendar year 2022. This implies that the FOMC increases that rate at each meeting for the balance of this year.

Ukrainian President Volodymyr Zelensky will make a wartime (virtual) address (never happens) to both chambers of the U.S. Congress on Wednesday. This kind of address by a foreign head of state is unusual to say the least. At the same time, word has it that President Biden is headed to Europe late this week.

That Will Be a No-Go

In what was a highly predictable event, Senator Joe Manchin of West Virginia came out against Sarah Bloom Raskin's nomination to become the Fed's Vice Chair for banking supervision. Given that the Senate is divided 50/50, and that Joe Manchin is a Democrat, this would effectively end Raskin's chances at ending up in that position, unless at least one Republican senator crosses the aisle. There so far, does not look to be any.
One has to wonder, just an opinion here, knowing that the Senate is split, and knowing that one Democrat represents a coal-producing state, why the president would have nominated Raskin without ironing out the path at least within his own party first -- or at least knowing he had some support on the other side.
Raskin's prior statements and criticisms of the way that both the Treasury Department and the Fed provided emergency lending backstops to businesses during the pandemic, especially that such backstops should have been designed to avoid lending capital to highly indebted fossil fuel-producing companies would almost force an elected official from a state whose economy relies upon fossil fuel production and is elected by constituents reliant upon fossil fuel production to oppose.

Either because it is becoming apparent that China, amid its Omicron or "Deltacron" surge is going to have to upgrade the quality of Covid vaccines available to its people, or because Pfizer ( PFE) CEO Albert Bourla is talking up a fourth shot for the already vaccinated, or because Moderna ( MRNA) actually dosed the first patient in an HIV vaccine study, the vaccine stocks took off on Monday.
BionTech ( BNTX) jumped 12%, Moderna advanced 8.6%, Pfizer leapt 3.9%, and Johnson & Johnson ( JNJ) gained 1.4% for the day as China shut down more cities and Bourla spoke on pediatric vaccinations.

Lockheed Martin ( LMT) posted the stock's first "up" day (+1.23%) after four "down" sessions as German Defense Minister Christine Lambrecht announced that the F-35 Lightning would replace some of Germany's aging fleet of Tornado aircraft and Eurofighter Typhoons.
For those not following, Germany after decades of atrophy, in response to Russia's invasion of Ukraine had launched a E100B military modernization fund, and plans to spend 2% of GDP on defense by 2024.
Northrop Grumman ( NOC) is a key electronic supplier to the F-35 program.