The markets continued their recent upward path Tuesday, with three of the major equity indexes closing above resistance, leaving all in near-term uptrends. However, we believe that the nearly vertical nature of the recent rally is likely not sustainable.

While investor sentiment remains near historic levels of fear that we view as an eventually strong upside catalyst, some of the data is sending signals that some pause/consolidation of the recent notable gains would not be surprising, suggesting better buying opportunities may be in the offering in the not-too-distant future. 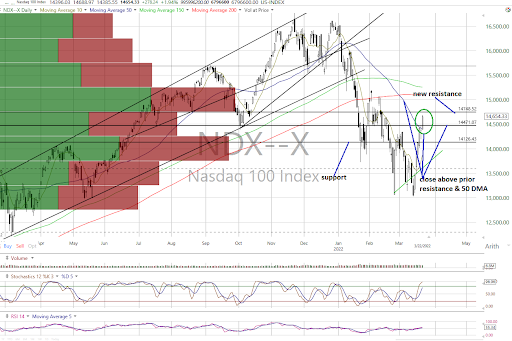 All the major equity index charts closed higher Tuesday with positive internals on lower volume for the NYSE and Nasdaq.

While the indexes closed at various points of their intraday ranges, the S&P 500, Nasdaq Composite and Nasdaq 100 closed above their resistance levels with the Nasdaq 100 also reclaiming its 50-day moving average.

Thus, all are in near-term uptrends an above their 50 DMAs.

However, the near-term trends have become almost vertical in nature that are likely not sustainable, in our view.

Cumulative breadth remains positive for the All Exchange, NYSE and Nasdaq.

Yet, the stochastic levels remain quite overbought on all and in the 90's. They have not yet generated bearish crossover signals that would raise some yellow flags.

Also, the VIX has pulled back to support suggesting we may see some increase in volatility.

The McClellan 1-Day Overbought/Oversold oscillators are overbought with the Nasdaq very overbought and still suggesting a pause/consolidation over the near term (All Exchange: +96.08 NYSE: +87.14 Nasdaq: +104.53).,

On the plus side, the detrended Rydex Ratio (contrarian indicator; see below) sank further to -3.98, showing leveraged short exposure levels seen only four times in the past decade, each of which was followed by a significant rally.

The Detrended Rydex Ratio Is -3.98 (Bullish) 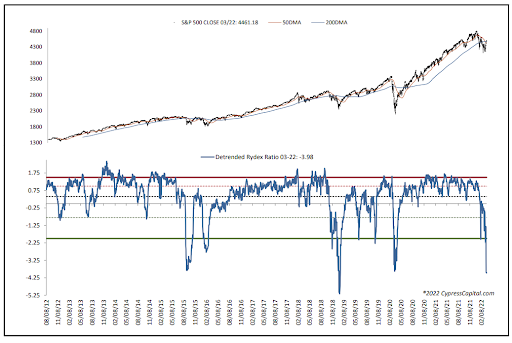 The 10-Year Treasury yield closed at 2.37% after testing resistance intraday. We view resistance as 2.4%. Support remains at 1.87%.

We now find ourselves in a debate between the very encouraging sentiment data while the vertical market gains combined with the OB/OS, VIX and stochastic readings suggest better buying opportunities may be seen in the not-too-distant future.

Get an email alert each time I write an article for Real Money. Click the "+Follow" next to my byline to this article.
TAGS: Indexes | Markets | Technical Analysis | Treasury Bonds | VIX | U.S. Equity