I heard a guy on TV say that everyone is bearish. I disagree.

I think everyone was bearish a month ago. As we entered the second week of May the Investors Intelligence bulls were 27.6%. Today they are 35.7%. That might not seem like a lot and in most markets it isn't but that sort of reading does not scream "everyone is bearish." To me it says the bearishness has eased. 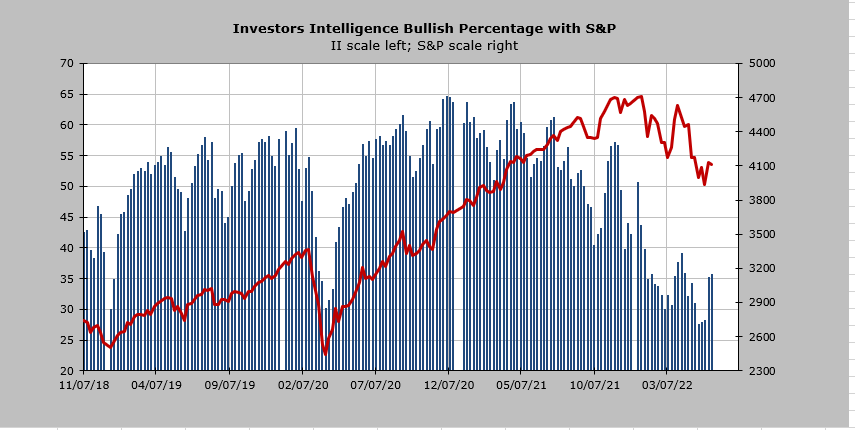 If you prefer to look at what folks are actually doing instead of a survey, then look at the 10-day moving average of the equity put/call ratio. In early May it was kissing 0.76 and now it is 0.56. It was 0.46 at the March/April high but here again, this indicator does not scream that there are too many bears. It says to me the bearishness has eased, and quite a bit.

Unless of course we're talking energy stocks, where there isn't a bear to be found. And we even have folks now telling us that they have loved energy for two years now. I call nonsense on that. Why? Two years ago we were not even three months removed from negative oil. No one wanted to buy Exxon  (XOM) . Uninvestable they said. The only energy stock you could buy (they said) was Chevron (CVX) because the dividend was secure. Exxon's dividend they weren't so sure about.

When Exxon reported earnings in early May 2020 they announced that the dividend was secure, which eased some of the concern. But here is a feature article from Bloomberg dated April 30, 2020 with the title, "The Humbling of Exxon."

Now? Is there anyone who doesn't think oil is going higher? Is there any big-cap portfolio that doesn't own Exxon or Chevron? Now we have CNBC doing a special documentary, "ExxonMobil at the Crossroads."

Let me report that the stock has done nothing wrong. But if we do a bit of math we find that the high of the recent pattern was $90 and the low was $75. We get $15 as the difference. If we add $15 onto $90 we get $105, which is essentially where the stock is. Would you chase it here? I wouldn't. Oh and the Daily Sentiment Indicator is at 93.

In terms of the overall market there has been a minor change in some of the indicators. The NYSE Hi-Lo Indicator is now at 0.62. The peak in March was 0.55 so if you want to be bullish you'd say it's a higher high. I think the Hi-Lo Indicator is likely to peak in the next week or so.

And while everyone is loving on oil, no one bothered to note the Transports got right to resistance and fell nearly 4% on Wednesday.

Speaking of getting right to resistance, I would note once again that the Russell 2000 got right into its resistance area on Tuesday (1900-1930) and backed off on Wednesday. I think it should see another try up there, but when I see how easily the Transports fell from resistance, I would take some profits on small-caps up there.

Get an email alert each time I write an article for Real Money. Click the "+Follow" next to my byline to this article.
TAGS: Indexes | Markets | Oil | Put Call | Small Cap | Stocks | Technical Analysis | Trading | Energy | U.S. Equity |