All the major equity indexes closed notably higher Wednesday with positive internals on the NYSE and Nasdaq in response to a weaker-than-expected CPI report. All closed near their highs of the day with several violations of resistance while some 150-day moving averages were surpassed as well.

All the indexes remain in near-term uptrends that, in our opinion, should continue to be respected.

However, the magnitude of Wednesday's gains pushed a few of the data points into cautionary levels. As such, they imply some discipline may be required regarding price on new equity purchases.

In addition, forward 12-month consensus earnings estimates for the S&P 500 continue to fade.

Thus, while we would not fight the trend, we would prefer to increase exposure on weakness.

Checking On the Charts 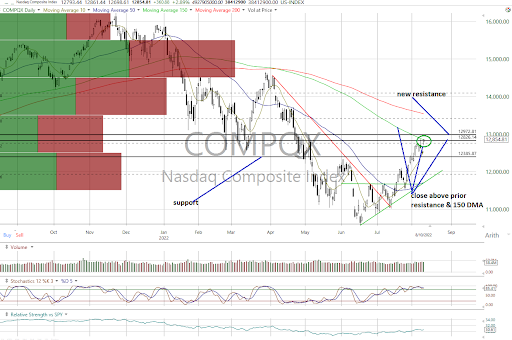 All the major equity indexes posted healthy gains Wednesday as all closed at or near their intraday highs.

Virtually every index closed above resistance with the one exception of the Russell 2000.

Also of note was the move above the 150-day moving average on the Nasdaq Composite (see above), Dow Jones Transports, Midcap 400 and Value Line Arithmetic Index.

As such, all the charts remain in bullish near-term uptrends that, in our view, should be respected.

Cumulative market breadth strengthened further as well, with the cumulative advance/decline lines for the All Exchange, NYSE and Nasdaq positive and above their 50 DMAs.

Deep Dive on the Data

The McClellan Overbought/Oversold Oscillators moved back into overbought territory from neutral (All Exchange: +75.79 NYSE: +82.17 Nasdaq: +70.83). They suggest price sensitivity may now be prudent.

The percentage of S&P 500 issues trading above their 50-day moving averages (contrarian indicator) turned bearish at 82%. It was around 13% at the June market lows.

The detrended Rydex Ratio (contrarian indicator) ticked up to -0.46, staying neutral as well.

This week's AAII Bear/Bull Ratio (contrarian indicator) moderated further as the crowd became a bit less fearful at 1.38. Thus, it is now "bullish" versus its prior "very bullish" implications.

The forward 12-month consensus earnings estimate from Bloomberg for the S&P 500 dropped further to $233.26 per share as analysts continued cutting their forecasts. As such, the S&P's forward P/E multiple is 18.0x and at a slight premium to the "rule of 20" ballpark fair value at 17.2x.

The tape remains bullish as it appears inflation fears are beginning to dissipate. We would respect the current uptrends but would be a bit more price sensitive at these levels given some of the data points and valuation spreads.