While the bears have been hammering the bulls of late, we are seeing levels on two indicators that suggest some relief of recent pressure may be in the offering. And should the indexes manage to close positive Friday after a weak open, that would tend to support our speculation of relief.

Recent selling pressure persisted Thursday, with all the major indexes closing at or near their lows of the day and all but one closing below their respective support levels. As such, all remain in near-term downtrends and have yet to show signs of a reversal of recent weakness via price and trend.

However, we are now of the opinion that some relief may be on the horizon based on the stochastic levels on the charts as well as the 1-day McClellan OB/OS Oscillators. 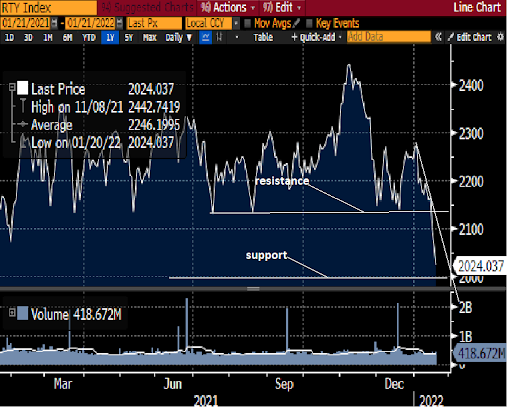 The major equity indexes closed lower Thursday with negative internals as trading volumes rose from the prior session.

All violated support except the Russell 2000 (see above). As such, all are still in near-term downtrends and below their 50-day moving averages.

Market breadth continued to weaken as well, with the All Exchange, NYSE and Nasdaq cumulative advance/decline lines negative and below their 50 DMAs.

However, the stochastic levels on each of the index charts are extremely oversold and at levels coincident with notable market rallies multiple times over the past year. We find that suggestive of some near-term relief.

The McClellan 1-Day Overbought/Oversold Oscillators are just shy of being extremely oversold, sending a similar signal as the stochastic readings (All Exchange: -93.38 NYSE: -98.7 Nasdaq: -91.86).

The percentage of S&P 500 issues trading above their 50-day moving averages slipped to 35% and remains neutral as the Open Insider Buy/Sell Ratio lifted to 50.2, staying neutral as well.

The detrended Rydex Ratio (contrarian indicator), measuring the action of the leveraged ETF traders, rose to 0.78 and remains neutral.

The Investors Intelligence Bear/Bull Ratio (23.5/50.6) (contrary indicator) remains neutral as the number of bulls and bears dropped from the prior week.

While Thursday's slide continued the recent pain, leaving chart trends and breadth in poor shape, the magnitude of the recent selloff has pushed the stochastic and McClellan levels to points that preceded rallies of importance multiple times over the past year. Should the markets close positive on the day, after a weak open, that would support our assumption of some relief.