By STEPHEN GUILFOYLE Sep 28, 2022 | 07:33 AM EDT
Stocks quotes in this article: CTAS, PAYX, THO, JEF, MTN, AAPL, R, XLE, XLRE, XLU, XLP, TSLA, CCJ
The news broke well after financial markets had closed. Just around bedtime for me. After all, the Mets were losing to Donnie Baseball and the Braves were winning.
Tuesday had been a back and forth kind of day for the markets, but overall, the best day that equities had seen in at least a week despite the S&P 500 having traded and closing at its lowest levels since December 2020.
What was the news that put U.S. equity index futures into the red for the night?
You may have guessed that the U.S. 10-Year Note gave up the 4% mark, and it did just about an hour ago as I bang away on this keyboard. That would be expected though, and wouldn't really break a lot of hearts.
I'm talking about the one stock that nearly every stinking one of us has an interest in, whether we know it or not. If you are invested at all, even in the most passive way, you probably have exposure to Apple ( AAPL) .
On Tuesday night, reports circulated (I saw it first at Bloomberg News) that according to "people familiar with the matter," Apple would be telling suppliers to pull back from plans to increase production of the iPhone 14 family of products by as many as 6M units over the second half of the year as an expected surge in demand had failed to materialize. Apple will instead focus on producing 90M handsets for the season, which would be even with the previous year and "in line" with the company's original projection this past summer.
Just a word of caution. We see reports like this from unnamed sources, it seems to me, just about every season. The story does not always play out that way. Am I long AAPL? Yes. Is that "hopium" speaking? Maybe.
AAPL is down a few percentage points overnight on this story. I am not married to AAPL. I have sold it in the past. Let's just say that I won't be quick to the trigger based on this story alone. 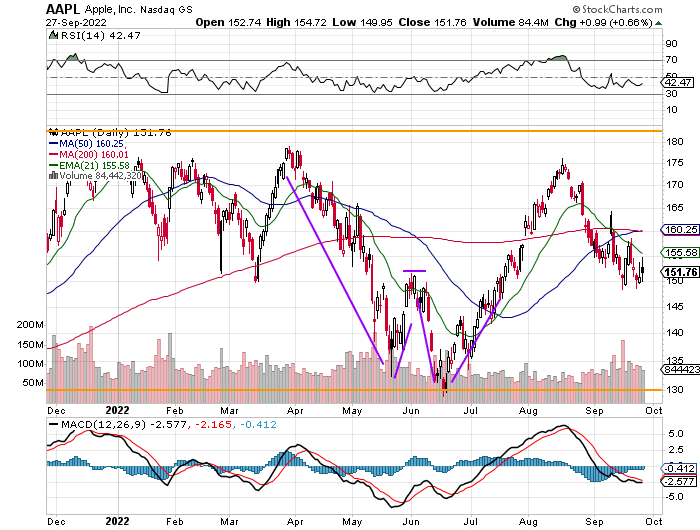 The real heartbreak for Apple shareholders would be, after already successfully breaking out of that double-bottom reversal in June/July, the surrender of all of the gains made above that pivot.
The real heartbreak would be the failure in real-time of the stock's 50-day simple moving average (SMA) to sustain this attempt at creating and holding a bullish "golden cross" as the 50-day SMA, which had been rising, will now trend lower more quickly than the 200-day SMA.

While the already mentioned S&P 500 did close in the hole for a sixth consecutive day on Tuesday, the overall market really wasn't that bad. Real Money contributor Helene Meisler said it best in last night's Top Stocks newsletter. Helene opened her piece like this:  "Well, that was a different sort of day. Sure, we gave up the morning rally, but we gave up the afternoon decline as well."
The Nasdaq Composite had been rather strong for much of the session, up as much as 2.2% at one point. That index gave it all back and more before algorithms bought equities over the final hour of play. The Composite closed up 0.25% for the day. If one did not know better, one might look at Tuesday's closing prices and think the day was quiet.
While the Dow Industrials and S&P 500 both closed in the red, the Nasdaq siblings, the Russell 2000, the S&P MidCap 400 and the S&P SmallCap 600 all closed in the green. None of those indexes gained or lost even half of one percent on Tuesday.
The only averages that gained or lost serious ground on Tuesday, were narrower more industry-specific type indexes. The Dow Transports gained 1.28% on the session as Ryder System ( R) gained 14.7% on takeover talk, the Philadelphia Semiconductor Index tacked on 1.04%, as the KBW Bank Index surrendered 0.94%.

Four of the 11 S&P sector-select SPDR ETFs shaded green on Tuesday, led by the cyclical-type groups that were themselves led by Energy ( XLE) . Seven of these funds closed lower, as the more defensive-type groups lagged. The REITs ( XLRE) , Utilities ( XLU) , and Staples ( XLP) all lost between 1.32% and 1.73% for the day.
The market breakdowns were better looking than you think. Losers beat winners by just a smidge at the NYSE, while winners beat losers by less than a smidge at the Nasdaq Market Site. However, advancing volume took a 51.1% share of NYSE composite trade, and a 58.4% share of that metric for Nasdaq listings. Aggregate trading volume, however, surprisingly tailed off on Tuesday from Monday despite Monday having been a religious holiday for many.

Treasury yield spreads continue to move if not into a healthy configuration, at least a healthier-looking direction. This morning, we see the U.S. 10- Year Note still yielding just about 4% and the U.S. 2-Year Note paying roughly 4.25%. Still badly inverted? You bet, -25 basis points is a lot better than the -33 basis points that this spread went out at on Tuesday and the -51 basis points seen late last week.
As strong selling has taken root for the 10-Year, these spreads that both create an environment for economic growth and are created by a lack thereof are improving. Take a look at this:
As the 10-Year Note has done this...

...and the all-important 10-Year/3-Month yield spread has done this:

I can't tell you that the U.S. will come out of this recession quickly or that it won't be harsh. The FOMC still seems a little lost on policy though there is finally some sentient sounding verbiage (at least one voice) coming out of that group. That said, the Treasury market is moving (not really close yet) toward something that appears to this economist to eventually be a potentially healthier environment in which to grow an economy. My base case remains recessionary.

On Tuesday, at least one Fed official, after the group has mindlessly plowed ahead with their narrative, finally seemed to maybe, not definitely, but maybe "get" it. Never mind Bullard for now. We all know that he is currently walking point for the hawks. Never mind Kashkari, he's just spouting said narrative. Chicago Fed President Charles Evans, who is historically very dovish, and is retiring, apparently felt free enough to speak his mind on Tuesday.
Evans (on CNBC Europe) said:  "There are lags in monetary policy and we have moved expeditiously. We have done three 75 basis point increases in a row and there is a talk of more to get to that 4.25% to 4.5% by the end of the year, you're not leaving much time to sort of look at each monthly release."
Now, I know that this is not much, and Evans did not push the envelope. He stayed within the narrative when pressed. What he said here, though, I think shows that he understands that the FOMC may have moved too quickly. They have certainly moved too quickly to know whether or not they have gone too far.
Evans seems to potentially understand this. Others must.

Not only does Tesla ( TSLA) hold its highly anticipated AI (artificial intelligence) Day this Friday, but the company is also expected to potentially deliver as many as 370K vehicles for the quarter (by October 1). Tesla's quarterly record is about 310K.

Readers will see that TSLA has hit stiff resistance (three times) at the 50% retracement level of the November 2021 through May 2022 selloff. Now, as we approach both the company's big corporate event and the quarterly delivery report, the stock sees its 50-day SMA rising rapidly and closing in on possibly and bullishly crossing over both its 21-day exponential moving average (EMA) and 200-day SMA. That would produce a "golden cross" that can itself produce a positive algorithmic reaction.
I am long this name for a trade looking for the stock's fourth attempt at that $312 level.

Everyone saw the Danish military's photos of the bubbles coming up from the Nord Stream pipelines. Bloomberg BNN reports that Germany plans to keep two nuclear power plants in reserve at least into April in order to limit the threat of winter blackouts. Nuclear power accounted for 6% of Germany's generation of electricity back in Q1, with 30% from coal and 13% from natural gas.
Is it not plain to see that nuclear power is an answer? Globally. Maybe not the answer, but in my opinion, certainly an answer.
I have initiated a long position in a Canadian operation, Cameco Corp. ( CCJ)  , which  engages in the exploration, and refining of uranium in the U.S., Canada, and Kazakhstan.
The name is on the verge of becoming profitable, having posted a quarterly profit for the June period. Full-year company profits are expected for this year and next. That said, revenue generation has been inconsistent, as a year-over-year contraction is expected for the current quarter. The balance sheet is solid, though. The company has more cash on the books than it does debt, runs with a current ratio of 6.02 and a quick ratio of 4.55. Those ratios are not just good, they are stunning.
The problem is that the shares are expensive. At a market cap of over $10B, CCJ trades at over 100 times forward-looking earnings. This is a make it or break it play for the winter season. 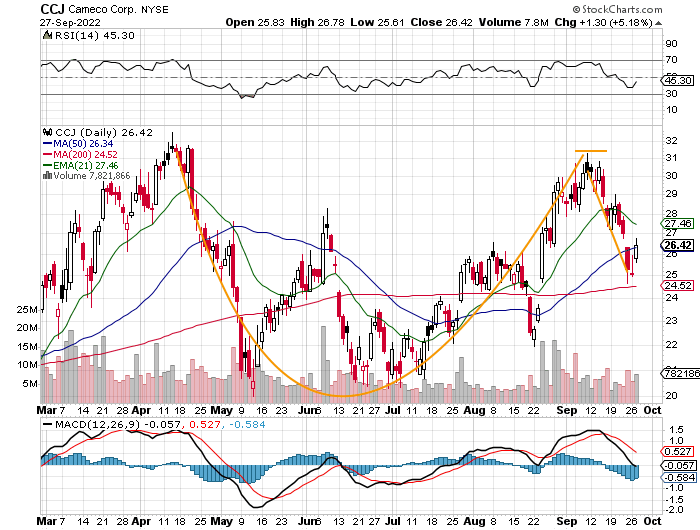 CCJ has built a cup-with-handle pattern since April with a $31.25 pivot. The shares have found recent support at the 200-day SMA and went out on Tuesday in a battle to retake their 50-day SMA.
My current target is $37. Of course, there is a chance that I am not looking at a cup-with-handle at all, but a double bottom. That would reduce the pivot to $28, which in turn would negatively impact my target ($32).