The major equity indexes closed mixed Tuesday as one more index turned neutral from bullish regarding its near-term trend.

The data dashboard is generally neutral and not yielding any strong implications as to near-term market action probabilities.

We remain of the opinion that the markets are going through a consolidation of the notable gains from the October lows -- and this may be displayed as some sideways action over the near-term. Within that context, we would be buyers of weakness near support levels. 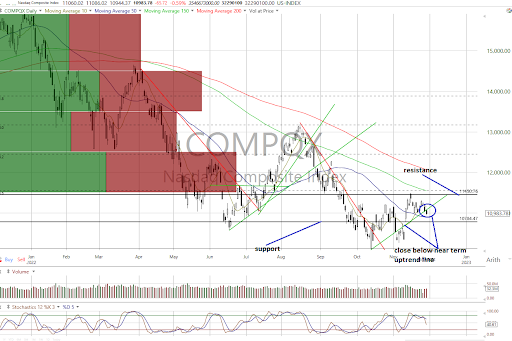 On the charts, the major equity indexes closed mixed Tuesday with positive NYSE and Nasdaq internals.

Performance was split with the S&P 500, Nasdaq Composite and Nasdaq 100 posting losses as the rest saw minor gains.

The only technical event of note was the Nasdaq Composite (see above) closing below its near-term uptrend line, turning neutral from bullish, joining the DJIA in that status. The rest remain in near-term uptrends.

There was no change in cumulative market breadth with the advance/decline lines for the All Exchange and NYSE staying positive with the Nasdaq's neutral.

However, the percentage of S&P 500 issues trading above their 50-day moving averages (contrarian indicator) remains in bearish territory at 85% and near peak levels seen only twice in the past two years.

The detrended Rydex Ratio, (contrarian indicator) dropped to -0.67, also staying neutral. We reiterate It has given up its strong bullish implications that were present just prior to the recent rally.

The new AAII Bear/Bull Ratio (contrarian indicator) rose to 1.46, remaining bullish versus its very bullish signal prior to the rally. 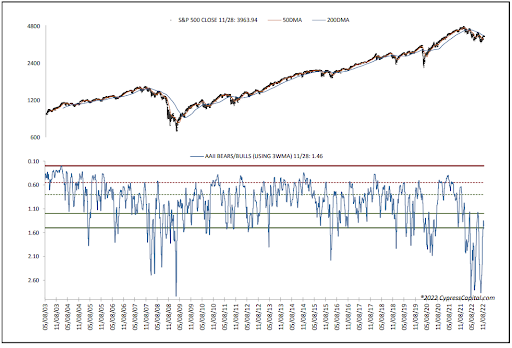 While charts remain largely constructive, the overview of the data is at a bit of a stalemate while valuation is a bit rich, in our opinion. Given the massive gains the markets have seen from the October lows, we believe we may be in a consolidation phase that could result in some sideways action for a while. As such, we remain buyers of weakness near support.