By STEPHEN GUILFOYLE Aug 04, 2022 | 07:15 AM EDT
Stocks quotes in this article: BDX, CI, COP, LLY, W, WRK, AMC, AMGN, SQ, LYFT, QQQ, XLK, AMD, NVDA, MRVL, KLAC, LMT, DIS, NKE, AMZN
Interesting. Equity market price discovery was hot on Wednesday. It may have told us a thing or two about what's going on as well.
Composite trading volume for Nasdaq-listed names increased by some 19.2% on Wednesday over Tuesday, as the Nasdaq Composite ran 2.59%, as the Nasdaq 100 ran 2.73%, as the Philadelphia Semiconductor Index ran 2.65%, and as the Russell 2000 ran 1.41%. Trading volume across constituent membership of the Nasdaq Composite, specifically, finished Wednesday roughly 12% above the 50-day trading volume SMA (simple moving average) for that index.
Yes, equities listed at the NYSE were also strong, as were equities not constituent to the Nasdaq Composite, but the trading volume was not quite there for stocks described in this way. The S&P 500 traded up 1.56% on Wednesday, the Dow Transports gained an even 1%, the Dow Utilities gained less than that. Composite NYSE-listed trading volume actually contracted an even 8% on Wednesday from Tuesday, as trading volume across constituent membership of the S&P 500 landed a whopping 21% short of the 50-day trading volume SMA for that index.
Just what is going on here? This is an undeniable trend, and there is certainly institutional money behind it.
Since July 19, the four busiest days for the Nasdaq Composite have all been "up" days, with three of those days experiencing trading volume greater than the 50-day moving average. Since July 1, the six most lightly traded days for the Nasdaq Composite have all been "down" days. Quite simply, there is professional capital being put to work during rallies, and a noticeable lack of professional interest during recent selloffs. This recent trend exists for the S&P 500, but has been less decisive in nature.
In his note last night, John Murphy of StockCharts shows the Invesco Nasdaq Trust ETF ( QQQ) testing a falling trendline. To translate this to the index charts that I have been showing readers on a regular basis: 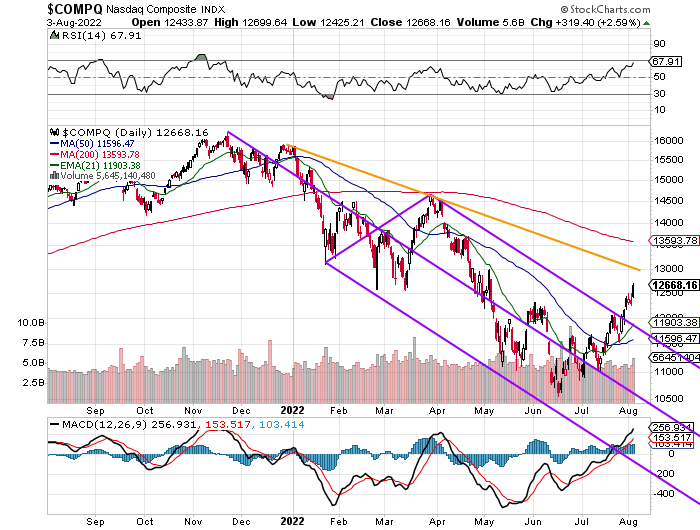 Readers will see that the Nasdaq Composite has broken out of my downward-sloping Pitchfork, and is moving toward a test of that downward-sloping trendline. Taking this trendline is key to taking the 200-day SMA for this index, which would in theory, light up interest across the realm of professionals, though as we have just discussed, a certain percentage of portfolio managers have already jumped the gun in anticipation. 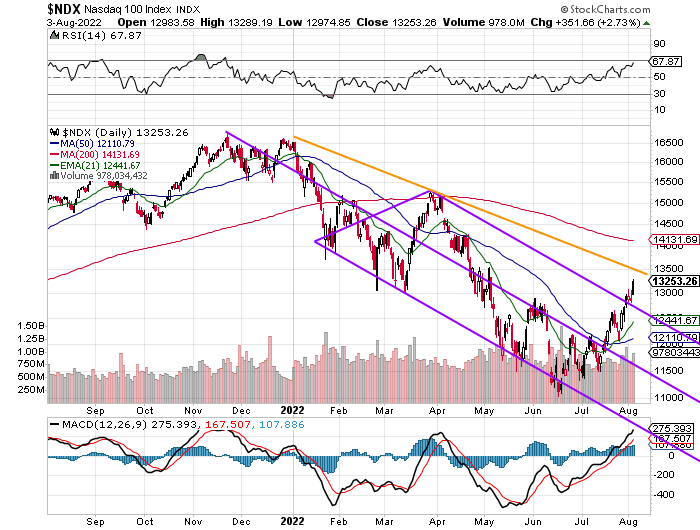 Readers will also note that the Nasdaq 100 (see above) is further along in this developing condition, as the Nasdaq 100 is more tech-centric than is the Nasdaq Composite. Digging a little further, we find that the Sector SPDR Technology ETF ( XLK) is already knocking on that door: 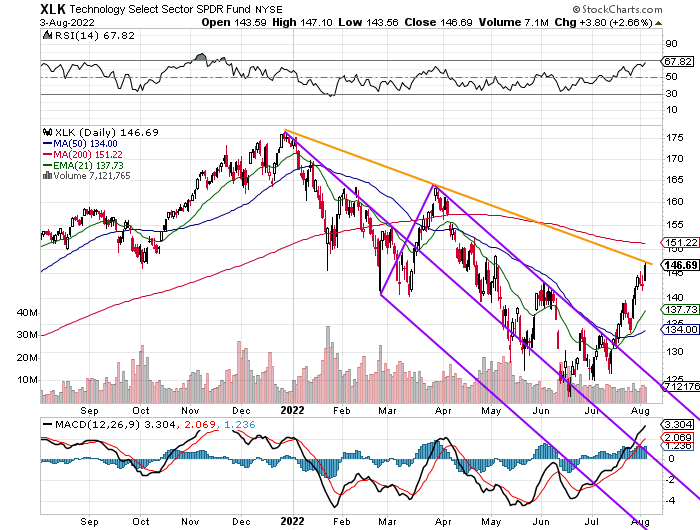 It is also much closer to recapturing its 200-day SMA.
Getting even more granular... 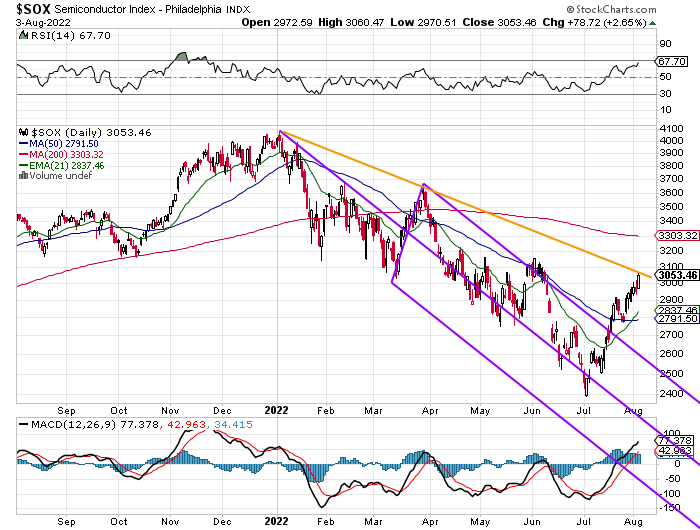 .. we find that the Philadelphia Semiconductor Index had been more difficult to contain within the downward-sloping Pitchfork as far back as early June, which is ahead of the market-wide, mid-June lows, and also now presses up against John Murphy's trendline.
Note that on all four of these charts, daily Moving Average Convergence Divergences (MACDs) are all in good shape, with all three components now above the zero-bound. Note also that for all four charts, readings for Relative Strength are outstanding without actually reaching technically overbought territory.
More room to run? That's very likely. What could screw that up? Chinese missiles in the Taiwan Strait. Friday's July employment data. An errant comment here or there. Really anything.
From my perch, I think I might see overbought readings for these RSIs on a collision course with their 200-day SMAs. That would be interesting.

I have not changed much. If you read me here on Real Money, or follow my appearances on TheStreet's Twitter Spaces and Fox Business, then you are familiar with my "pitchfork approach" to market survival that we implemented with some nervousness in mid-June.
The central spoke of that Pitchfork, you'll recall, was the semiconductors. It was then that we loaded up significantly on Advanced Micro Devices ( AMD) , Nvidia ( NVDA) , and Marvell Technology ( MRVL) . We have since (missed the low), added KLA Corp ( KLAC) . All four have worked spectacularly. We had taken some profits in AMD going into earnings and remain long all four names.
The other two spokes of the Pitchfork have at least done their job. Our Staples are all up rather small since then, but are at least up. Our Defense stocks have had a tougher go of it. Lockheed Martin ( LMT)  , in particular, has been volatile, but moved back into the green.
As for the longer-term investment book, readers and listeners know that we initiated both Disney ( DIS) and Nike ( NKE) not at the lows, but coming off of those lows. We have built those long positions using only down days, and currently have average entry points of $93.49 for DIS and $104.05 for NKE. Both positions are about halfway to where I want them in terms of allocation.
We have since added Amazon ( AMZN) to this book (ahead of earnings) with an entry-sized position expecting to add on the post earnings dip. That dip never materialized, so while up nicely, this one may have to be a trade rather than an investment. I have not yet made that decision. (My original AMZN target price of $138 has been pierced, also forcing a token sale as discipline dictates. Current price target: $175.)

It's been an excellent summer that bailed out a tough first two weeks of June. I can't be alone. Cash levels have been back down to a more normal allocation for a couple of weeks now. Am I thinking of taking profits? Of course. See AMD. See AMZN. It's not like I am about to get rid of my underperforming Staples.
Recession, if it worsens, will damage all stocks. The FOMC has taken the fed funds rate up to 2.25% to 2.5% from the zero bound. Almost none of that has yet hit Main Street. It normally takes nine months or so for Main Street to truly feel changes in monetary policy. That means that the fed funds rate could even be a full 100 basis points higher than it is now when Mr. and Ms. America start to feel the first increases made to short-term rates.
With core inflation certainly ebbing since February/March, and signs everywhere that both housing and labor markets are just starting to crack, the time has come for the Fed, not to truly pivot, but to take a more nuanced, more finessed approach. Monetary policy is always a blunt instrument, and has been even more blunt for several years now. Force was necessary to get the nation through the economic crisis of the pandemic at its height, and the Fed along with the Treasury Department, were absolutely magnificent.
As inflation roared and the Fed fell behind due to reasons that were not entirely all of their own making, force was once again necessary. Now is the time to take the pace of ongoing short-term rate hikes down to baby steps. Be careful here. Let the economy and the markets absorb what has already been done and allow quantitative tightening to run its course,
Tightening monetary conditions should be systematic and measured from here. Anything more aggressive at this point, is reckless, unless core inflation reverses higher. From a policy-making perspective, headline inflation is too volatile, and cannot react to policy changes meant to impact conditions over the longer-term, in real-time. Addressing the headline rate cannot be the focus, and could (will) force a potentially catastrophic error.