During Monday's "rip-roaring bullish reversal," trading volumes rose significantly to above 7 billion shares on both the NYSE and Nasdaq as the indexes registered what we consider to be key reversal days, as all closed significantly above their intraday lows. Yet these notable intraday recoveries did not alter the fact that all the indexes remain in near-term downtrends.

On the other hand, the data is flashing several bright green lights on the dashboard, in our opinion. The McClellan 1-day OB/OS Oscillators remain very oversold as insiders bought stock with a vigor that had not been seen since May 2020. All this occurred as contrarian market sentiment readings denote the "crowd" running for cover.

As such, and despite a lower open and declines in early trading, we see Monday's key reversals on the charts combined with the data suggesting we may well have seen a culmination of the recent selling panic. 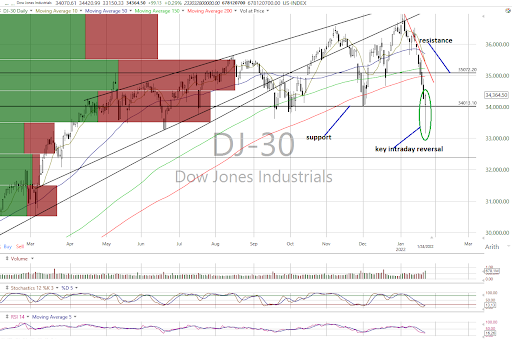 The major equity indexes closed higher Monday with negative internals on the NYSE as the Nasdaq saw negative breadth but positive up/down volume. Trading volumes were north of 7 billion shares on both.

Most importantly, all the indexes closed significantly above their intraday lows to close positive from their sizable intraday losses. For instance, the DJIA (see above) had a 1,300-point intraday range. In our opinion, these were key intraday reversals that suggest we have seen the climax of recent selling pressure.

However, all remain in near-term downtrends and below their 50-day moving averages as are the cumulative advance/decline lines for the All Exchange, NYSE and Nasdaq.

The fact that the stochastic levels remain oversold and in the low teens may prove beneficial as well, awaiting bullish crossover signals.

Data Green Across the Board

The percentage of S&P 500 issues trading above their 50-day moving averages lifted to 33% and is still at levels suggesting a bounce.

The Open Insider Buy/Sell Ratio jumped to 82.8, the most aggressive buying on their part since May 2020.

The detrended Rydex Ratio (contrarian indicator), measuring the action of the leveraged ETF traders, dropped to 0.49 as they fled the field.

The significant intraday recoveries on the indexes on massive volume combined with aggressive insider buying as the crowd ran for the hills suggests, in our view, an important buying opportunity is at hand despite the current negative futures.

Get an email alert each time I write an article for Real Money. Click the "+Follow" next to my byline to this article.
TAGS: Indexes | Markets | Stocks | Technical Analysis | Trading | Treasury Bonds | VIX | U.S. Equity

Picking a stock is easy. Managing it as market conditions change and price action shifts is the hard part.

Cash Is King Once Again in This Market Environment

After more than a decade of historically low to near zero interest rates, cash has value again.

Sell Signals Have Yet to Appear Amid Market Rally