All the major equity indexes posted notable losses Monday, breaking support by a wide margin that turned all the near-term trends bearish from neutral. What's more, the charts have yet to suggest an abatement of selling pressure.

On the bright side, the 1-day McClellan Oscillators are oversold and the new contrarian investor sentiment numbers find the already elevated fear levels increasing.

In our opinion, the current bearish chart trends should be respected until violations of resistance, downtrend lines and stronger breadth are registered. 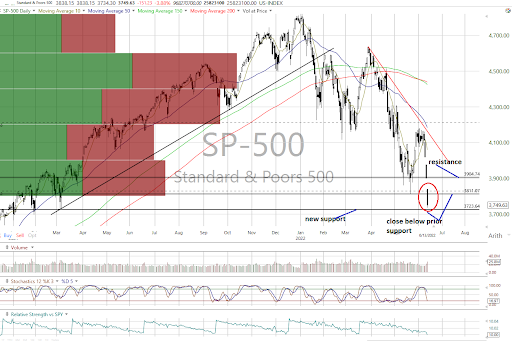 All closed below support that resulted in turning all the prior near-term trends from neutral to bearish.

Cumulative market breadth contracted as well as the advance/decline lines for the All Exchange NYSE and Nasdaq also turned bearish.

Several of the charts are oversold on their stochastic readings but none have yet generated bullish crossover signals.

Our primary focus is on the charts and breadth that both require improvement before becoming more optimistic, in our view.

The percentage of S&P 500 issues trading above their 50-day moving averages (contrarian indicator) dropped to 4% and well below the 25% trigger line, remaining bullish.

On the other hand, he detrended Rydex Ratio (contrarian indicator) at -1.93 remains in bullish territory as the leveraged ETF traders are still highly leveraged short.

The Investors Intelligence Bear/Bull Ratio (contrary indicator) also remained on a very bullish signal and still near a decade peak of fear at 40.0/35.72. We repeat, only twice in the past decade has bearish sentiment been this extreme, both of which were coincident with market bottoms. 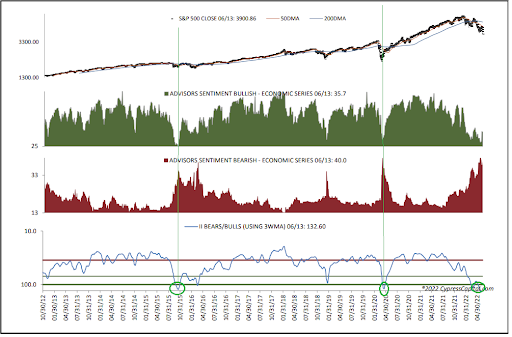 While the data are sending some encouraging signals and valuation becomes further compressed, we believe fighting the current chart trends as unwise. Both the trends and breadth require improvement. Meanwhile, as long as the 10-Year yield rises, it will put pressure on forward valuation even as it trades at a discount to ballpark fair value. Caution is the better part of valor.