All the major equity indexes closed lower but managed to close well above their intraday lows that left their near-term support levels intact that had been violated on an intraday basis. Nonetheless,

All the charts of the major equity indexes remain in near-term downtrends and lacking technical evidence of imminent reversals to the positive. However, the counterbalancing data continue to suggest to us that some internal pressure is building for a rally. And that rally could prove notable given the historically high levels of bearish sentiment that have historically presaged upside market moves.

Meanwhile, the S&P 500's forward valuation is trading at a discount to fair value, something not seen in several months.

As such, we are still sticking our neck out with our assumption that a turning tide based on sentiment and valuation is becoming more probable.

All the major equity indexes closed lower Friday but well above their intraday lows due to significant buying in the last hour of trading.

Importantly, in our opinion, the late-day surge pushed all the charts back above support, all of which had been violated on an intraday basis. We believe that the last hour of trade in the markets is telling as it is more rational in thought than early session action.

Still, all the indexes remain in near-term downtrends with no signs of reversal,

Cumulative market breadth was unchanged and neutral for the All Exchange, NYSE and Nasdaq.

Some stochastic levels are oversold but no bullish crossovers have been generated thus far.

In contrast to the charts, we continue to believe the data is building upside pressure for the markets, especially regarding sentiment.

The percentage of S&P 500 issues trading above their 50-day moving averages (contrarian indicator) dropped to 13% and remains bullish.

The Open Insider Buy/Sell Ratio slipped slightly to 105.4 and is neutral although the past several sessions have seen an increase in their buying activity.

In sharp contrast, the detrended Rydex Ratio (contrarian indicator) remains very bullish at -3.03 as the leveraged ETF traders are leveraged short at historically high levels. Its chart shows only five times in the past decade have the ETF traders been so heavily leveraged short, all of which were followed by rallies. So, the Rydex/Insider dynamic is very encouraging. 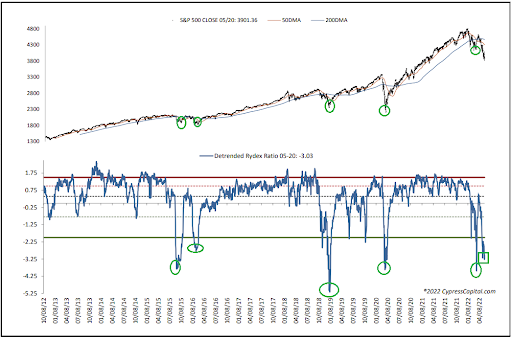 The crowd remains essentially entirely on the bear side of the boat that typically results in sizable up moves as sentiment eventually starts to shift.

The forward 12-month consensus earnings estimate from Bloomberg for the S&P 500 has dipped to $234.75 per share. As such, the S&P's forward P/E multiple remains at 16.6x and at a discount to the "rule of 20" ballpark fair value at 17.2x. This discount has not been seen in the markets for several months.