What if? By when? How much? All in good time. Time? Deadline? Artificial? Perhaps prepared for mass consumption.

Is there this "sought for" level of tangible urgency? Do they really do more than play this game over and over and over. Just hoping to push for some more each and every time. Serve thy neighbor? How noble. Polluted with thoughts of power.

The past week ended quietly enough. The major equity indexes moved just slightly on Friday, and on rather negative breadth at that. After days of more positive-looking internals, too.

The final day of the week also brought with it reduced aggregate trading volumes after four days of thicker activity. It all started with a sharp Evergrande-induced selloff last Monday, but by that day's final hour, despite a VIX and a Put/Call ratio that showed a certain level of concern, there was no fear.

Actions speak louder than words. While those on the sidelines spoke of emotion, and at least some traders paid for insurance, what happened was nothing more than the latest chapter in the "Buy the Dip'' mentality that has served so well over the past 18 months (and beyond), that the behavior has become habit.

The week became more about the Fed's timetable for tapering asset purchases, and Treasury market performance from the belly of the yield curve on through the deep end. This morning, the U.S. 10-Year Note has paid as much as 1.48%, up from the 1.46% where that issue went out on Friday, and less than 1.3% as recently as Wednesday.

Equities rallied despite the higher nominal rates. The S&P 500 gained 0.5% for the five-day period, even after surrendering 1.7% on Monday. The Nasdaq Composite closed virtually unchanged for the week (up 0.02%) despite taking a 2.2% beating on Monday.

The Energy Sector Select SPDR ETF (XLE) easily led the way north last week, +4.5%, with the yield curve-supported Financial sector SPDR (XLF) finishing a strong second place (+2.1%) among the 11 sectors. Five sector select SPDRs finished in the red for the week, including all four defensive-oriented funds. Those considered to be bond proxies by income-driven investors obviously finished at the very bottom.

My thoughts for the past week?

Technically, the story would be that both the S&P 500 and Nasdaq Composite gave up their respective 21-day exponential moving averages (EMAs) and 50-day simple moving averages (SMAs) on Monday, and had retaken both lines by week's end. The volatility was likely taken advantage of by the swing crowd, while my bet is that more than a few managing professional money were forced out of positions earlier in the week by their risk managers only to be forced to pay higher prices to re-establish those positions at representative size.

The Evergrande crisis magically went away by week's end, as the firm found a way to service its yuan-denominated debt, and investors (not directly impacted) learned that the dollar-denominated side of their debt came with a 30-day grace period. Fact is that these specific securities are trading at about a quarter of face value.

The real crisis here is not that the Evergrande story will be back (it most certainly will), but that China is not only not able, but also not politically willing to be the global driver of economic growth that it had once been. Beijing has placed an overt priority on power over performance, forcing inconsistent regulation on successful companies, and successful business persons, all while trying to implement methods (crypto-crackdown) that would prevent any ease in organized capital flight across borders.

In a letter to House Democrats on Saturday, Speaker Nancy Pelosi wrote: "The next few days will be a time of intensity." The fact is that federal government funding is set to run dry by 12:01 ET this Friday (Oct. 1) morning. Unless our legislators act to increase or suspend the debt ceiling, or Treasury Secretary Janet Yellen can pull a rabbit out of her hat, the government will go into a partial shutdown at that time. The House has already passed a stopgap bill that would temporarily avert such a shutdown, and that bill will be taken up in the Senate this week. That's just the beginning of where the gnarly hair will grow in the coming week.

As the House takes up the $550B (new money) to $1.2B (total package including reallocated funds) bi-partisan infrastructure bill on Monday (today) with an intent to cast votes on Thursday (as promised in the Pelosi letter), the lower body will also negotiate further the much larger social and climate-based spend and tax bill. Pelosi has signaled that to get both bills passed in addition to avoiding a government shutdown, the supposed $3.5T framework for the larger bill will likely end up smaller (how much smaller?) than that.

The trick is that the Democratic caucus majority (counting the vice president) can use the process of reconciliation to pass the larger bill, and that requires only a simple majority in the upper house. At that framework's current size, the Democratic party is split.

As far as the stopgap bill to keep the federal government running, Republican senators will still have the filibuster option available to them, meaning that in order to borrow more dough, that bill needs 60 votes. Right now, there are probably no Republican senators and less than 50 senators from the left-leaning side of the aisle that would be willing to vote "yea" unless there were some guarantee that this would not simply open the spigots to fiscal policy even more abusive than what we have experienced since the turn of the millennium.

The party in power tends to take advantage. No administration has even considered balancing the budget since the 1998 to 2001 period. Hence, power often changes hands.

Put succinctly, President Biden needs a win. With polls showing public approval in a state of deep decline, and packed college football stadiums across the nation chanting profane language and the president's last name in one two-word sentence from one end of the country to the other, this administration needs to avoid a government shutdown, needs to get (especially) the infrastructure bill across the goal line, being it comes with jobs and has broad support from leadership across both major parties, and needs not to be embarrassed on the social/climate agenda-based spending plan.

In just eight months, the nation has experienced both loss and global shame in the complete and absolute debacle that was the reckless evacuation of Afghanistan that included abandoning a major Air Force Base that had kept the Taliban, Iran, China and Russia all in line and doing so prior to its use for humanitarian purposes becoming quite necessary. Don't get me wrong, this is not political. This is an assessment. I am neither a Democrat nor a Republican, and I would take reference as either one to be personally insulting.

As we move on, the border crisis worsens, the treatment of Haitians trying to emigrate appears questionable at best, and nobody understands just who is actually eligible for Covid vaccine booster jabs. Aren't all of us somehow at risk? The midterm elections of 2022 are not so far off as to not be upfront in the minds of legislators as they go into this negotiating maelstrom.

Even with all that is political now center stage for our marketplace this week, there is enough at the periphery to focus on. JPMorgan Chase (JPM) does not report for another two weeks, so earnings season is not quite on the radar just yet.

This week, in fact, on Tuesday (Sept. 28), Facebook (FB) will hold its annual "Gaming Developer Day." Can the event be some kind of catalyst for the stock? The shares gave up 3.2% last week after surrendering 3.7% the prior week. In addition, Recode's Code Conference will be held from Monday through Wednesday this week. The event, from Beverly Hills, is one of the more high profile tech conferences of the year. Expect to hear from Salesforce (CRM) , Alphabet (GOOGL) , Microsoft (MSFT) , Netflix (NFLX) , Advanced Micro Devices (AMD) , and Elon Musk, who may be representing SpaceX, Tesla (TSLA) or both.

Now that I've mentioned earnings, two weeks out from the season, according to FactSet, consensus for third-quarter earnings for the S&P 500 are for earnings growth of 27.6% on revenue growth 14.9%. With two quarters in the books and two to go, the community of sell-side analysts in aggregate are looking for earnings growth of 42.6% for the calendar year on revenue growth of the very same 14.9%. (Just a heads up, growth slows quite "bigly" next year.)

The S&P 500 currently trades at 20.8 times next 12 months forward-looking earnings, with Consumer Discretionaries being the most expensive sector at 30 times and Energy still the cheapest at 13.2 times. 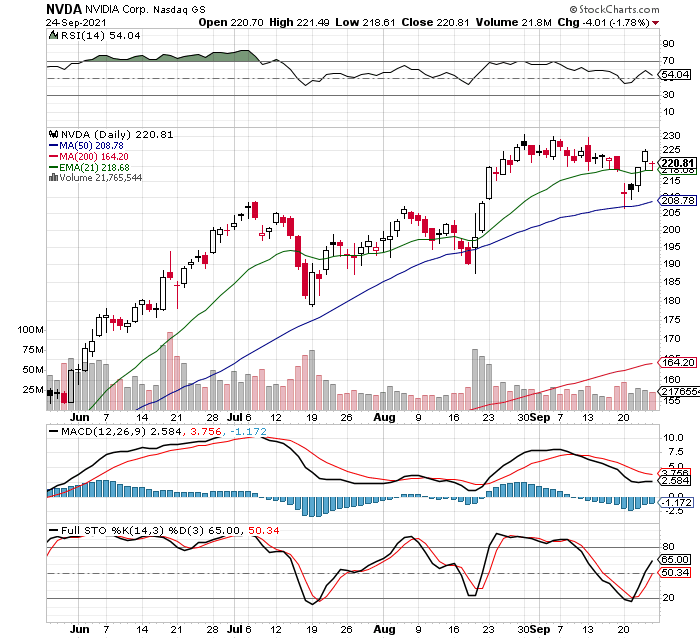 God question. Relative Strength is rather neutral, but well off the highs. The Full Stochastics Oscillator is already recovering. The daily Moving Average Convergence Divergence (MACD) seems elevated, albeit without the nine-day.

The stock has retaken it's 21-day EMA, bouncing off of the 50-day SMA like it were a trampoline. What do you see?

Do you see a cup with a handle?

Do you see a double bottom?

Do you see a basing period of consolidation?

Know what? It does not matter. Both the cup-with-handle and double-bottom patterns offer us a $207 pivot. The base offers us $207 support, which acknowledges that level as an established pivot.

My thoughts. I remain long the name, and do not intend to save the position until I see a $250 handle. That's my price target and this is a reiteration.

By my count there are four public appearances scheduled for today by Fed officials, and twenty in total for the week. Buckle up, buttercup.

Get an email alert each time I write an article for Real Money. Click the "+Follow" next to my byline to this article.
TAGS: Federal Reserve | Futures | Indexes | Markets | Politics | Stocks | Trading | Treasury Bonds | China | Earnings Preview