The strength of the market gains on Tuesday impacted the index charts in a significant way. Multiple positive technical events were registered while cumulative breadth improved as well.

However, the significant gains moved the 1-day McClellan OB/OS Oscillators to neutral from their prior oversold levels while the rest of the data remain neutral.

Now let's take a closer look at where the markets stand right now. 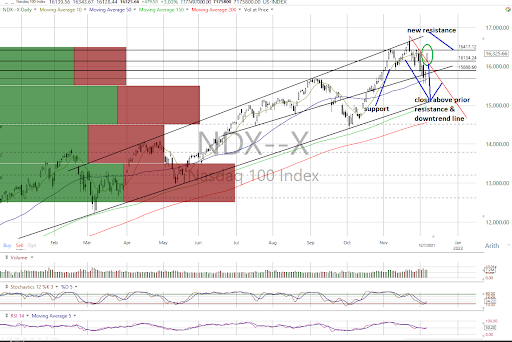 All the major equity indexes closed higher Tuesday with positive internals on the NYSE and Nasdaq. All but one of the indexes registered positive technical events as follows:

-- The S&P 500 closed above resistance and near-term downtrend line.

-- The DJIA closed above resistance and its 50-day moving average.

-- The Nasdaq Composite closed above its 50 DMA, downtrend line, and resistance while also generating a bullish stochastic crossover signal.

-- The Nasdaq 100 (see above) closed above its downtrend line and resistance.

-- The Russell 2000 closed above resistance and downtrend line.

-- The Value Line Arithmetic Index closed above resistance and downtrend line as well.

So, as of the close, we find all the indexes are now in near-term neutral trends.

Cumulative breadth also improved with the All Exchange and Nasdaq joining the NYSE A/D in neutral trends versus their prior negative slopes.

Looking at the data, the McClellan 1-Day Overbought/Oversold Oscillators shifted back to neutral territory (All Exchange: -7.01 NYSE: +6.14 Nasdaq: -15.36). In our opinion, this is not surprising given the depth of their prior oversold conditions that contributed the recent rally. However, they may suggest a slowing of recent strength at current levels.

The percentage of S&P 500 issues trading above their 50-day moving averages lifted to 61% and remains neutral.

The Open Insider Buy/Sell Ratio dipped to a neutral 68 as insiders eased up on their buying activity.

However, the detrended Rydex Ratio (contrarian indicator), measuring the action of the leveraged ETF traders, dipped slightly to a neutral 0.98. We view this as a positive as they remain somewhat nervous. So, the Insider Buy/Sell-Rydex comparison remains encouraging.