The charts of the major equity indexes are seeing violations of support and trend throughout this past week as bearish stochastic crossover signals sent a cautionary message while the data have become a bit more clouded.

Indeed, the weight of the evidence had shifted sufficiently to change our near-term macro-outlook for equities. 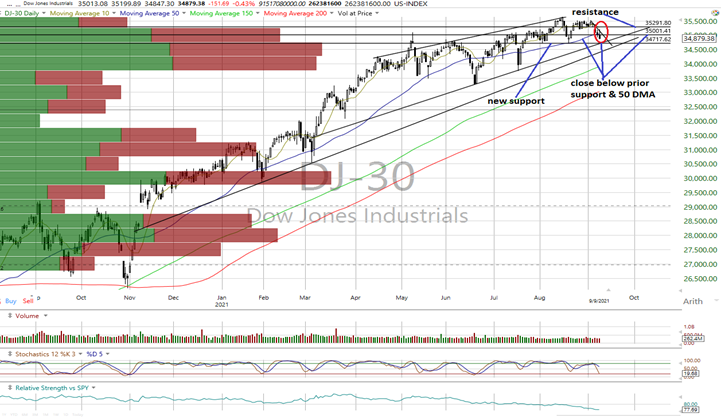 All the major equity indexes closed lower Thursday with mixed internals on the NYSE while the Nasdaq's were positive, both on lighter volume. All closed at or near their intraday lows as the important last hour of trading saw an increase in selling pressure.

Also of note was the S&P flashing a bearish stochastic crossover signal. The same signal was generated earlier in the week on the MidCap 400, Value Line Arithmetic Index and DJIA, prior to their weakening.

All the charts are near-term neutral except the DJIA being bearish.

Market breadth weakened over the past few sessions with the cumulative A/D lines for the All Exchange, NYSE and Nasdaq now neutral and below their 50 DMAs.

The Rydex Ratio (contrarian indicator), measuring the action of the leveraged ETF traders, rose slightly to 1.3 and still finds the ETF traders heavily leveraged long and on a bearish signal.

The Open Insider Buy/Sell Ratio lifted to 23.7 but remains bearish versus its prior neural levels of last week.

This week's contrarian AAII Bear/Bull Ratio and Investors Intelligence Bear/Bull Ratio (contrary indicator) both saw an increase in bears and bulls with the AAII remaining neutral (33.8/38.73) and the II bearish at 21.3/52.1.

The forward 12-month consensus earnings estimate for the S&P 500 from Bloomberg dipped slightly to $207.61 per share. As such, the S&P's forward P/E multiple is 21.6x with the "rule of 20" finding fair value at approximately 18.7x.

The 10-Year Treasury yield dipped to 1.3% but remains within its current trading range with resistance at 1.4% and support at 1.23%. We will watch the 10-Year yield closely for a possible breach above resistance.

The combination of weak chart action and market breadth over the past week as bearish crossover signals were registered, in combination with the data being less than encouraging, cause us to follow our discipline and alter out near-term macro-outlook for equities to "neutral" from "neutral/positive.

The Pullback in Nucor Looks Like It Has Run Its Course

Let's pay a visit to the charts of the U.S.-based steelmaker.

After Nike's Earnings, I Have a Warning About the Stock

More than the first-quarter revenue miss, the problem was in the company's guidance.

Large-Cap Indexes Rally to Resistance -- And That Could Be Problematic

There is a reasonable possibility, in our view, of the recent rally failing near current levels.

Despite a largely unfazed market, here's why I remain very cautious overall.