After Tuesday's notable market declines what are the current index charts and data telling us?

While the charts look like a down staircase with most in negative trends and market breadth continued to deteriorate, there are reasons to be a bit more encouraged.

Indeed, we are seeing some levels on the data dashboard that we believe warrant a change in our near-term macro-outlook for equities. 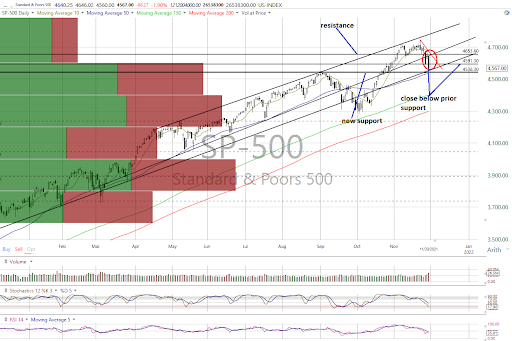 The major equity indexes closed notably lower Tuesday with very negative internals on the NYSE and Nasdaq on heavy volume as all closed at or near their lows of the day.

The net result was that only the Nasdaq Composite and Nasdaq 100 are in neutral near-term trends with the rest negative.

Market breadth deteriorated further as well with the cumulative advance/decline lines for the All Exchange, NYSE and Nasdaq negative and below their 50 DMAs.

However, while we have yet to see any bullish stochastic crossover signals generated, the stochastics are quite oversold for the majority.

We believe it important that the McClellan 1-Day Overbought/Oversold Oscillators are now very oversold and at levels that have been followed by good reflex rallies three times over the past year (All Exchange: -110.01 NYSE: -116.4 Nasdaq: -105.15). In fact, the only time they were more oversold was during the original Covid outbreak in March 2020.

The detrended Rydex Ratio (contrarian indicator), measuring the action of the leveraged ETF traders, lifted to 1.15 and remains cautionary.

While the charts and breadth look awful, the OB/OS levels combined with active insider buying and oversold stochastic levels are significant enough to alter our near-term macro-outlook for equities to "neutral/positive" from "neutral."