As markets decline Monday in the wake of protests in China over strict Covid policies, there are reasons to believe we could have a period of consolidation.

Uptrends for all the major equity indexes were left intact following the holiday-shortened week, however, three data points (see below) suggest some caution is warranted. Therefore, we believe the most sensible approach is to respect the uptrends while waiting for weakness that may afford better buying opportunities. 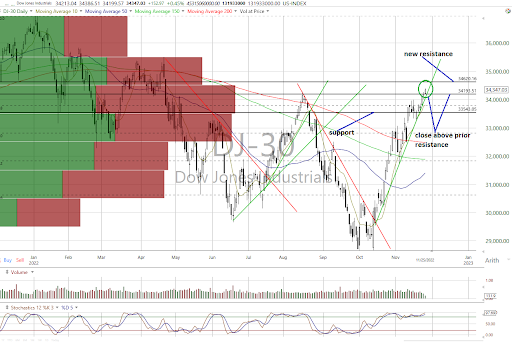 On the charts, the major equity indexes closed mixed Friday with the S&P 500, Nasdaq Composite and Nasdaq 100 posting losses as the rest gained. Market internals were mostly positive.

The only technical event of note on the charts was the DJIA (see above) closing above resistance.

As such, all the charts remain in near-term bullish trends that should be respected, in our opinion.

Cumulative market breadth saw some improvement with the cumulative advance/decline lines turning positive and above their 50-day moving averages for the All Exchange, NYSE and Nasdaq.

Several of the stochastic levels are overbought but none have generated bearish crossover signals as of Friday's close.

The McClellan Overbought/Oversold Oscillators moved back into overbought territory for the All Exchange and NYSE with the Nasdaq's staying neutral (All Exchange: +56.63 NYSE: +74.53 Nasdaq: +45.63).

We would note the percentage of S&P 500 issues trading above their 50 DMAs (contrarian indicator) moved higher to 89% and is on a bearish signal as it is at a peak level seen only twice in the past two years. 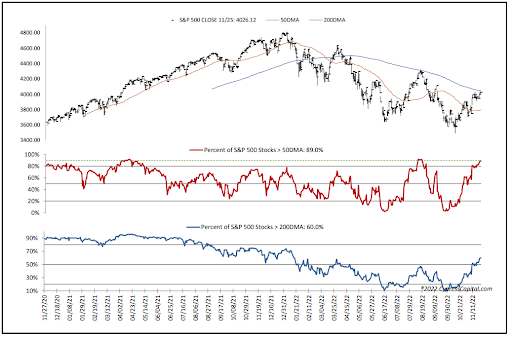 The detrended Rydex Ratio, (contrarian indicator) dropped to -0.82, also staying neutral. It has given up its strong bullish implications that were present just prior to the recent rally.

The same can be said for the AAII Bear/Bull Ratio (contrarian indicator) as last week's reading slipped to 1.35 and is now bullish versus its very bullish signal prior to the rally.

The charts suggest the near-term positive action in the markets should still be respected. However, the McClellan OB/OS levels combined with the percentage of stocks trading above their 50 DMAs and market forward valuation suggest we maintain our approach that price should not be chased while waiting for weakness as better buying opportunities.