The charts are now evenly split between near-term neutral and bullish while market breadth remains supportive. The data is mixed while the level of crowd fear has moderated but remains on a bullish signal.

To us, the charts and data are likely suggesting the worst of the damage may be complete and that buying weakness near support may now be appropriate. 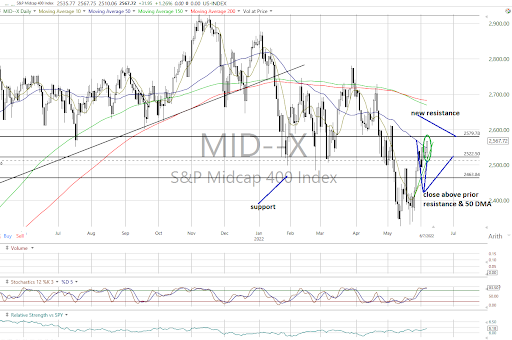 All the major equity indexes closed higher Tuesday with positive internals on the NYSE and Nasdaq as trading volumes declined on both exchanges from the prior session.

The weak open saw buyers step in to take control of the session that, at the close, found the MidCap 400 (see above), Russell 2000 and Value Line Arithmetic Index all closing above resistance as well as their 50-day moving averages, joining the Nasdaq 100 in near-term uptrends. The rest remain neutral.

Meanwhile, the S&P 500 and DJIA yielded "bullish engulfing patterns" that are generated when a stock or index opens below and closes above the prior day's open and close.

Market breadth is supportive as the cumulative advance/decline lines for the All Exchange, NYSE and Nasdaq remain positive.

Stochastic levels are overbought but have not yet given bearish crossover signals.

The detrended Rydex Ratio (contrarian indicator) rose to -1.88 from -4.16 a few days ago but remains in bullish territory as the leveraged ETF traders are still leveraged short.

This week's AAII Bear/Bull Ratio (contrarian indicator) remains very bullish at 1.81, although a bit less so versus last week's 2.18 reading.

The Investors Intelligence Bear/Bull Ratio (contrary indicator), below, also remained on a very bullish signal and still near a decade peak of fear. However, we would note bears declined as bulls increased to 38.0/36.2. Only twice in the past decade has bearish sentiment been this extreme, both of which were coincident with market bottoms. 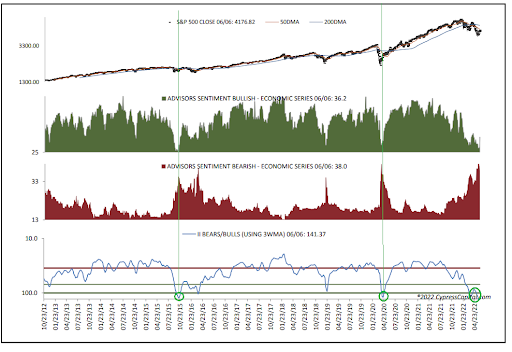 Get an email alert each time I write an article for Real Money. Click the "+Follow" next to my byline to this article.
TAGS: Indexes | Markets | Small Cap | Stocks | Technical Analysis | Trading | Treasury Bonds | U.S. Equity