Several support levels on the major equity indexes were violated once again Friday as all remained in near-term downtrends. However, two of the major indexes formed "hammer" formations that may suggest near-term bottoms may have been established for both. That said, these patterns need confirmation as discussed below.

Market cumulative breadth is also negative while the McClellan 1-day OB/OS Oscillators are in oversold territory and investor sentiment (contrarian indicator) is near extreme levels of investor fear.

Yet, while there is some encouraging data, the charts having yet to show enough signals that the storm has passed. As such, we believe said signals are necessary before committing to new long positions. 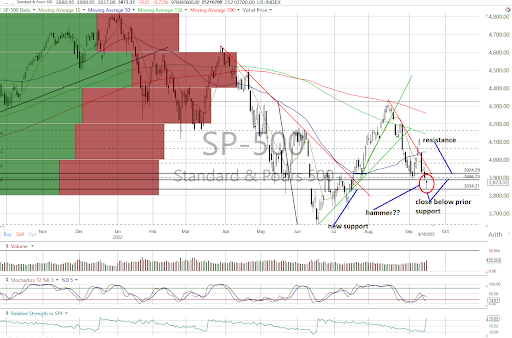 All the major equity indexes closed lower with negative internals on heavy volume.

All remain in near-term bearish trends as the S&P 500, DJIA, Nasdaq Composite (see above), Dow Jones Transports, Midcap 400 and Russell 200 closed below support.

However, the S&P 500 and DJIA may have put in "hammer bottom" formations as they opened down, traded deeply lower during the session but saw enough buying interest near the end of the day to drive them back up to the highs of the day. While they suggest a possible washout of sellers, their intraday lows (S&P:3,837 DJIA:30,521) may be tested and need to be held to be validated.

Market cumulative breadth continues to deteriorate with the advance/decline lines for the All Exchange, NYSE and Nasdaq.

There are some oversold stochastic levels on the charts, but bullish crossover signals have not appeared thus far.

The McClellan Overbought/Oversold Oscillators are in oversold territory but not at extremes (All Exchange: 66.62 NYSE: -77.46 Nasdaq: -50.83).

The percentage of S&P 500 issues trading above their 50-day moving averages (contrarian indicator) dropped to 24% and remains neutral but close to a bullish signal should it drop below 20%.

The Open Insider Buy/Sell Ratio ticked up to 54.5% but remains neutral as well. 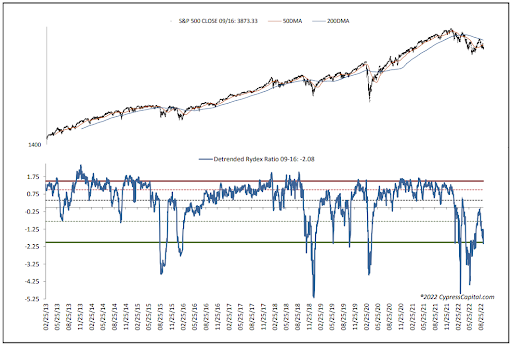 Last week's AAII Bear/Bull Ratio (contrarian indicator) rose notably to 2.16 and is on a very bullish signal as well with bears outnumbering bulls by more than 2 to 1.

The Investors Intelligence Bear/Bull Ratio (contrary indicator) was 29.7/29.7 and neutral.

The forward 12-month consensus earnings estimate from Bloomberg for the SPX continued to slide down to $232.43. As such, its forward P/E dipped to 16.7 and at a slight premium to the "rule of 20" ballpark fair value at 16.6.

The SPX forward earnings yield is 6.00%.

The 10-year Treasury yield closed lower at 3.46%. We continue to view support at 3.08% with resistance at 3.50% although it is indicating above resistance at the open.

While there is some encouragement from the data, the charts, despite the possible hammer bottom signals, have yet to suggest the current correction has been completed. Patience is still required.