The most important technical events of Tuesday's session were two equity indexes shifting their near-term trends to positive from neutral while another shifted in the opposite direction. As such, we find the near-term chart trends evenly split between positive and neutral projections.

On the data side, most of the data points are neutral although there was an uptick in insider buying activity. 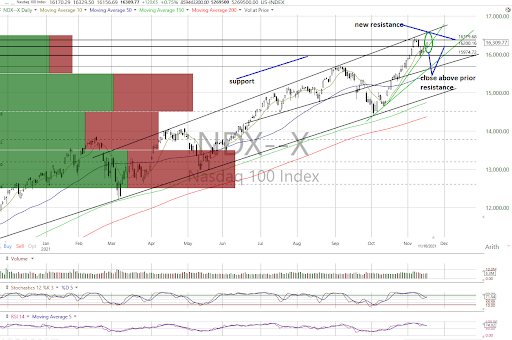 The major equity indexes closed higher Tuesday although decliners outweighed advancers on both the NYSE and Nasdaq as trading volumes rose on both exchanges. Most closed near the midpoints of their intraday ranges.

On the positive side, the Nasdaq Composite and Nasdaq 100 (see above) closed above their near-term resistance levels, turning their near-term trends form neutral to positive.

On the other hand, The Dow Jones Transports closed below its near-term uptrend line and is now neutral versus its prior positive slope.

As such, the trends are evenly split with the Nasdaq Composite, Nasdaq 100, MidCap 400 and Value Line Arithmetic Index positive with the rest neutral.

Cumulative market breadth remains neutral on the All Exchange, NYSE and Nasdaq while no stochastic signals were generated at the close of the session.

The detrended Rydex Ratio (contrarian indicator), measuring the action of the leveraged ETF traders, dipped to 1.25 but remains inside bearish territory as they continue their extended leveraged long exposure.

The Open Insider Buy/Sell Ratio lifted to 32.7 from 27.2 as insiders did some buying but remains neutral.

While the indexes gained Tuesday, breadth was poor while market selectivity is notable, and the charts and data continue to send a somewhat mixed message. As such, we are maintaining our near-term macro-outlook for equities at "neutral".

There Are Good Reasons to Be Cranky About This Market

I'd like to spin Monday's action as bullish but with what's going on under the hood, it is hard.

The challenge for traders is determining how long the Omicron uncertainty will weigh on the markets.

The Oil Spill Was Ugly, but Support Is Holding: Key Levels to Watch

Volatility events are commonly followed by market consolidation as traders pair risk and lick their wounds.