We are getting more comfortable...

Importantly, two of major equity indexes not only closed above resistance Thursday but also violated their intermediate-term downtrend lines, although their near-term trends remain neutral.

The data is a bit mixed, but the investor sentiment is so bearish that, as a contrarian indicator, it implies potential for further upside. And while the S&P 500 still trades at a slight discount on a forward 12-month valuation basis, we are getting more encouraged regarding improving market prospects.

We are now more comfortable with the idea of buying near support levels as some near-term profit taking would not be unusual.

Let's take a close look at the charts and data.

What's Happening on the Charts 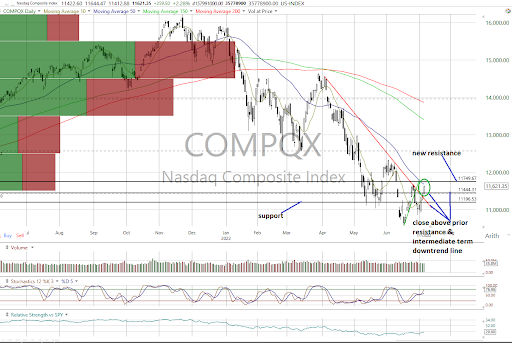 All the indexes closed near their session highs with the Nasdaq Composite and Nasdaq 100 (QQQ) managing to close above resistance as well as their intermediate-term downtrend lines that have been in effect since the end of March.

While their near -term trends remain neutral, as do all the others, the violation of the intermediate-term trend is of some technical importance, in our opinion. Technical theory suggests the longer a trend is in place, the more important a violation of said trend is when it occurs.

Cumulative market breadth remains neutral for the All Exchange, NYSE and Nasdaq as are the stochastic readings on the indexes.

The McClellan Overbought/Oversold Oscillators are now slightly overbought for the All Exchange and Nasdaq while the NYSE's remains neutral (All Exchange: +51.78 NYSE: +48.26 Nasdaq: +55.04).

However, the detrended Rydex Ratio (contrarian indicator) dropped further to -2.36 and is on a very bullish signal as the typically wrong leveraged ETF traders increased their already heavily short exposure.

The Investors Intelligence Bear/Bull Ratio (contrary indicator) saw a rise in bulls and drop in bears but is also very bullish at 40.0/32.9. Three times in the past decade, such readings have marked market lows, most followed by notable rallies.

While we do not expect the markets to go up in a straight line from here as volatility remains an issue, the chart improvements combined with sentiment and valuation at a slight discount suggest further improvements are becoming more probable.