All the major equity indexes closed at or near their highs of the day with the charts seeing multiple technical improvements as the markets responded to the wash-out of sellers in the prior session as noted by the "hammer" formations. All the index charts are now neutral as a result.

Now let's see where we may be headed next. 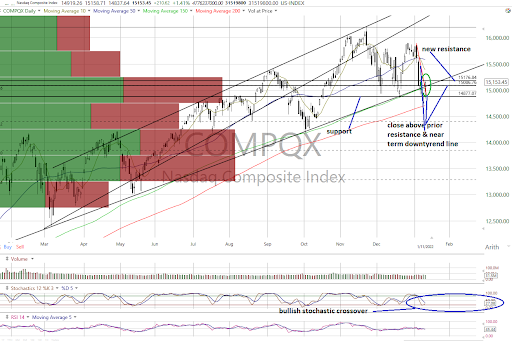 Only the Dow Jones Transports closed lower Tuesday as the rest of the major equity indexes saw strong performance with positive internals on the NYSE and Nasdaq. All closed near their highs of the day as buyers held into the close after what appears to have been a selling climax in the prior session as noted by their "hammer" signals we discussed here Tuesday.

As such, all the equity charts are now in near-term neutral trends.

Cumulative market breadth improved on the NYSE, turning positive from neutral while the All Exchange turned neutral from negative. The Nasdaq A/D remains in a downtrend at this point.

The percentage of S&P issues issues trading above their 50-day moving averages rose to 65% and remains neutral as the Open Insider Buy/Sell Ratio slipped to 34.3, staying neutral as well.

The detrended Rydex Ratio (contrarian indicator), measuring the action of the leveraged ETF traders, rose slightly to 0.96, staying neutral as they remained skeptical of the rally.

Tuesday's strong rally appears to have confirmed the bottoming "hammer" signals in our last article. With the chart and breadth improvements and the data not flashing any red signals at this point, we maintain our near-term macro-outlook for equities at "positive."

We Are in an Everything Bubble

Our economic lives are ruled by a cadre of unelected technocrats who have zero experience in the real world or dealing with real people.