Arena Pharmaceuticals (ARNA) was mentioned during the "Lightning Round" of "Mad Money" Tuesday night. Jim Cramer said "That train has left the station. It's too late for this one."

Fair enough, but let's see what the charts suggest for risk points.

In this daily bar chart of ARNA, below, we can see a large sideways trading range with neutral or mixed technical signals. Since March ARNA has largely traded sideways between $34 or so on the lower end and the $48-$50 area on the topside.

The daily On-Balance-Volume (OBV) line has mostly moved sideways sine March and is not giving me a strong sense of whether traders are accumulating shares or distributing shares.

The Moving Average Convergence Divergence (MACD) oscillator recently crossed to the upside from below the zero line - this is a signal to cover shorts.

In this weekly bar chart of ARNA, below, we can see that prices made a strong rally from a 2016-2017 base. Prices were above the rising 40-week moving average line but they have weakened in recent months and ARNA is now below the flat 40-week line.

The weekly OBV line has been neutral for several months, while the MACD oscillator is poised to move below the zero line for an outright sell signal.

In this Point and Figure chart of ARNA, below, we can see an upside price target of $47.99 - an okay rally but not a breakout to new highs. 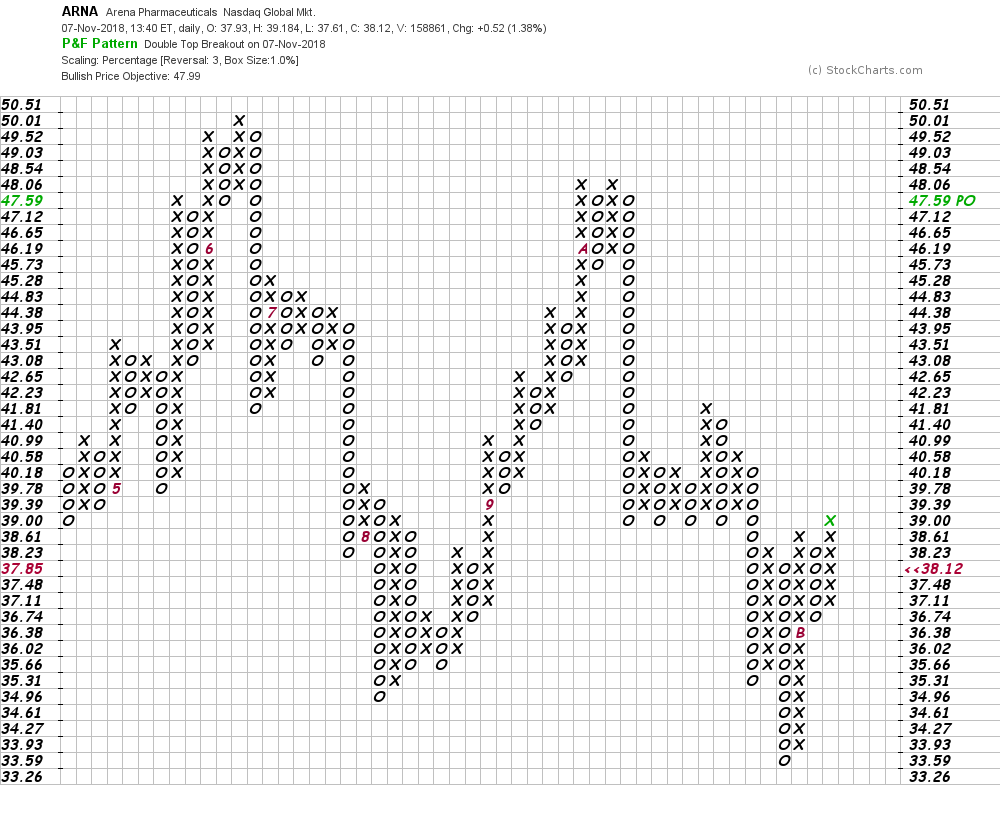 Bottom line strategy: Jim Cramer gave his opinion on ARNA, and after examining the charts and indicators, I find that ARNA is not attractive and that a close below $34 will weaken the chart further.

Get an email alert each time I write an article for Real Money. Click the "+Follow" next to my byline to this article.
TAGS: Jim Cramer

Jim Cramer: I'll Put My Money With 'Boring but Lucrative' Any Day

Let's look at that recent downgrade of 'dull' Morgan Stanley and see why exciting is best left for the stadiums and amusement parks -- and not stocks.

It's the question of our time: Where are the people willing to take on these better paying gigs? Let's see what's going on and what we need to happen.

Jim Cramer: Here's How Analysts Can Be Off By a Wide Margin

Let's look at the reactions to Nike, Costco and Salesforce to see what happens when they're viewed from a real world perspective.

Jim Cramer: Go Ahead, Have a Cow, but I Say Powell and Xi Are Bulls

We rallied, because China's President Xi and Fed Chair Powell made decisions that they knew would lead to rallies.