I really don't play video games, unless you count chess. I do enjoy puzzles which involves either language or numerical sequences. But I do not sit there banging away on my mobile device or in front of a monitor playing someone on the web that I don't know in a game I don't understand. Nothing wrong with it. I'm just a wee bit on the wrong side of nature's age distribution metrics. The video game craze really came just after my window closed. I was really part of the "place your quarter on pinball machine in you want to play next" crowd.

Perhaps that is why I did not really notice the rather successful turnaround now well into the next gear taking place at Zynga (ZNGA) . Back when I was building different portfolios based on virus response, and the burgeoning "stay at home" economy, I clearly see with the precision of 20/20 hindsight that this would have been a low priced stock that would show itself to fit nicely with that imposition on public recreational choices. The question is now, is it too late to jump on this bandwagon? Plainly, is there a trade here?

Zynga, the stock, ran hard on Friday through the afternoon in particular. No reason quite apparent at the time. Enter Monday. News breaks. Zynga announces the agreement to acquire Turkish mobile game maker Peak for a cool $1.8 billion, comprised of $900 million in cash, and $900 million in Zynga stock. Peak, for those who maybe never heard of the firm, has two puzzle type games that are popular, Toon Blast and Toy Blast. The acquisition, keeping in mind that Zynga has typically paid for growth in the past, would surpass the 2018 majority stake purchased in Small Giant Games in Finland, and be Zynga's largest deal ever.

The deal is also expected to help Zynga improve margin. That has been the catch in recent quarters, as revenue growth has been strong now for five consecutive quarters. Toward that point, Q1 earnings reported almost a month ago now, showed revenue growth of 52% but disappointing earnings. Here is where it gets interesting. Nearly all who live and die through advertisement have been caught off guard by reduced marketing budgets across the entire economy as consumer spending on anything beyond essentials withered substantially.

Of Zynga's $403.7 billion in Q1 revenue, $344 million was driven by the users themselves. User pay revenues increased 72%. That's important. It means more and more consumers were willing to pay for what Zynga sells. Any resurgence in advertising budgets as economies reopen will end up looking like "found money."

Even more interesting, Zynga raised guidance on Monday Morning. The firm now sees Q2 revenue generation up around $430 million from a prior view of $400 million. Booking, which have been strong, are now expected to land up at $500 million. Prior guidance was for $460 million. The firm even took adjusted EBITDA from $32 million to $35 million. 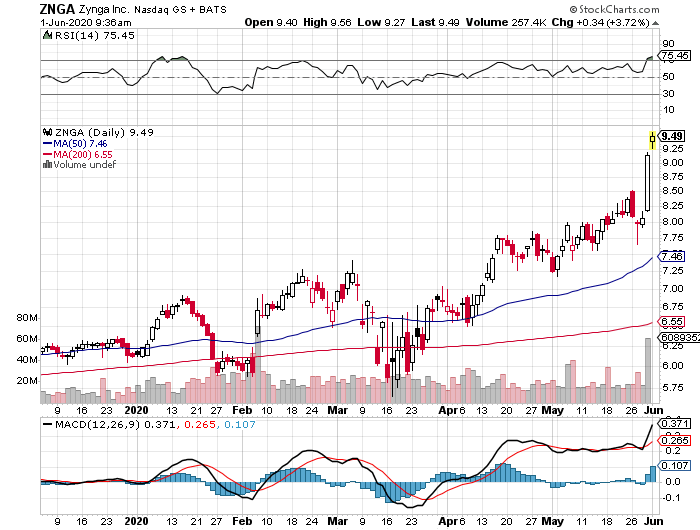 Notes: Options related to Zynga can be somewhat illiquid. Traders may have to work these orders a little bit, or mess around with expiration dates in order to accomplish something similar. For the trader, in this example, there is a best case scenario. That would be the shares trading above the $10 level as they expire in August. Hence, the shares are called away, and trader pockets a 19.1% profit. Worst case? The shares trade below $8 upon expiration, and trader winds up long 200 shares at net basis of $8.10 with the shares trading below $8.

Get an email alert each time I write an article for Real Money. Click the "+Follow" next to my byline to this article.
TAGS: Earnings | Investing | Options | Stocks | Technical Analysis | Trading | Software & Services | Gaming