In his second "Executive Decision" segment Friday on Mad Money, Jim Cramer sat down with Jay Chaudhry, chairman and CEO of Zscaler, Inc. (ZS) , the cloud security platform which just reported a four-cent-a-share earnings beat with a 61% rise in revenues. Shares fell nearly 6% amidst the market's broader selloff Friday and are weaker again today.

Chaudhry said Zscaler is disrupting legacy security systems, many of which are still protecting offices rather than protecting data no matter where it lives.
He said products like Microsoft's ( MSFT) Office365, along with Salesforce.com  ( CRM) , Workday  ( WDAY) , and many others, are moving companies to the cloud so security needs to move there as well.
Chaudhry explained that Zscaler acts as a checkpoint for a company's cloud and network traffic, inspecting it for threats of all kinds. Let's inspect the charts and indicators, too.

In this daily bar chart of ZS, below, we can see how prices have rallied from their November nadir. Prices recently closed below the cresting 50-day moving average line.The $65-$60 area looks like it could provide some support. The 200-day line is below the market with a positive slope.

In this limited weekly bar chart of ZS, below, we can see that prices are above the rising 40-week moving average line.

The weekly OBV line shows what could be the beginning of a downtrend and the weekly MACD oscillator has narrowed towards a possible bearish crossover.

In this point and figure chart of ZS, below, we can see that prices have reached a downside price target, and there looks like a zone of support below the current level.

That is not a good reason to buy or to go long, in my opinion. 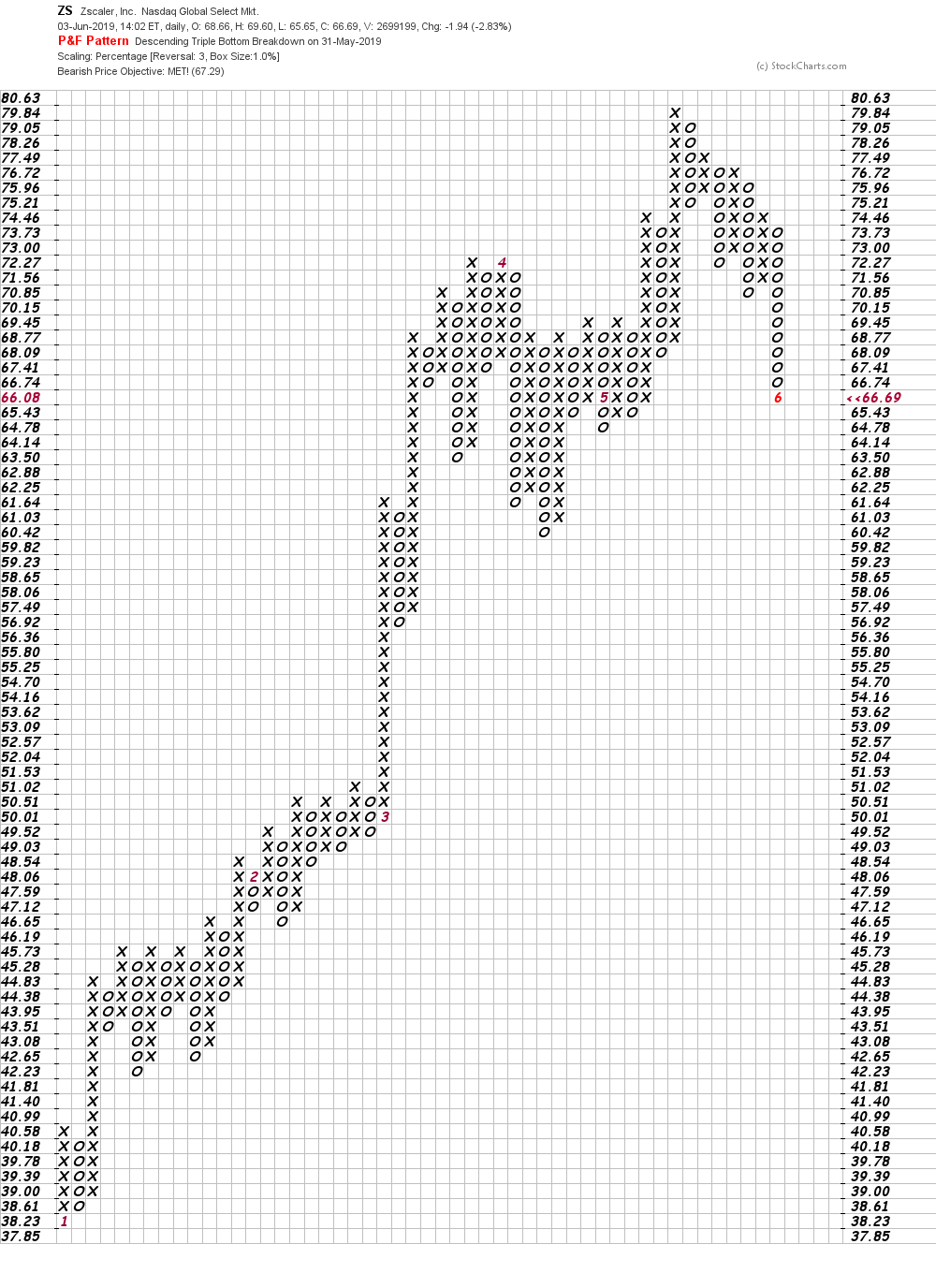 Bottom line strategy: While the fundamentals of ZS sound interesting, the charts have begun to weaken. I would suggest putting ZS on your potential shopping list for now, but let's see how things develop.

(Salesforce and Microsoft are holdings in Jim Cramer's Action Alerts PLUS member club. Want to be alerted before Jim Cramer buys or sells CRM or MSFT? Learn more now.)

Get an email alert each time I write an article for Real Money. Click the "+Follow" next to my byline to this article.
TAGS: Investing | Markets | Stocks | Technical Analysis | Trading | Cybersecurity | Software & Services | Mad Money | Executive Interview