On Thursday, a number of cybersecurity software stocks did very well as Russian troops invaded Ukrainian territory and the world braced for an expected upswing in cyber attacks. Sarge-fave Zscaler (ZS) was one of those names. The stock soared 10% during the regular session. After the closing bell, Zscaler released the firm's fiscal second quarter financial results. That's when things went south. Literally.

For the three month period ending January 31st, Zscaler posted adjusted EPS of $0.13 on revenue of $255.56M. Both of these numbers beat Wall Street and the sales number was good for annual growth of 62.8%, the firm's fastest pace of year over year acceleration in revenue generation in three years. That's all good. Problem is GAAP EPS printed at a loss of $0.71 per share, which fell short of expectations, and full year guidance, while solid, and better than official consensus view, appeared a little light versus whispers that may have been for more. Thursday's gains evaporated overnight, and then some.

The firm ended the period with a net cash position of $1.621B and current assets of $1.989B, both numbers up more than $100M over 12 months. Current liabilities increased to $836M, largely on an increase in deferred revenue. Obviously a current ratio of almost 2.4 is quite healthy, especially for a business that does not involve building or carrying inventories. Total assets of $2.422B easily outweigh total liabilities less equity of $1.882B. The liability side of the balance sheet is dominated by net convertible senior notes. Zscaler fundamentals easily pass the Sarge test.

At this point, I have found five sell-side analysts that have opined on Zscaler since this release. A number have lowered target prices. There are four "buy" ratings or buy equivalents, and there is one "hold" rating (actually a "peer-perform"). The average target price across the five is $340.60 with a high of $418 (Alex Henderson of Needham) and a low of $275 (Alex Zukin of Wolfe Research, our peer-perform).

Dan Ives, the well known analyst at Wedbush, reduced his target price to $330 from $400, citing a lower multiple environment. Ives said, "While every hyper growth name with premium valuations are in the penalty box in this risk-off white knuckle market, ZS is in the early days of leading the way on zero trust architecture and protecting cloud workloads via its ZPA/ZIA fortress solution making this a unique growth name to own for the coming years in our opinion."

Ives, you may recall, expected "rock solid" results from both Zscaler and Palo Alto Networks (PANW) as the corporate shift to the cloud continues. Ives made positive comments in both January and again earlier this month. 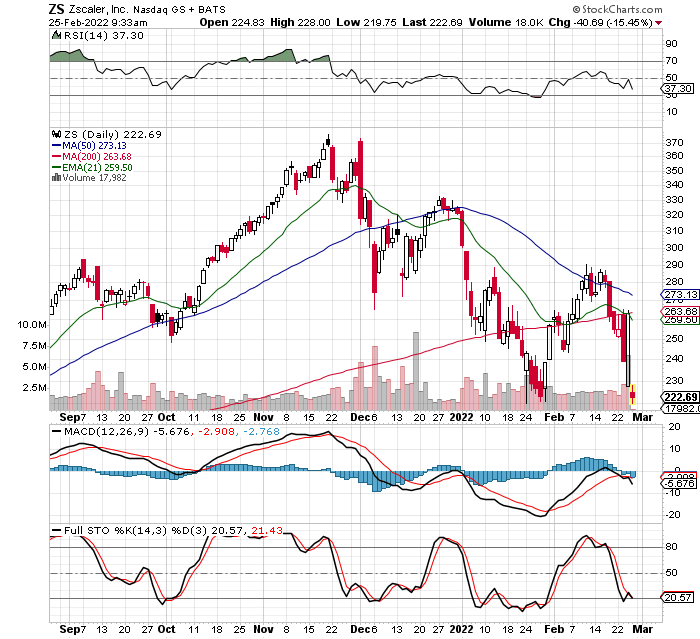 Clearly, ZS is now very close to being technically oversold. The daily MACD has turned ugly. Relative Strength is weakening, relatively. The Full Stochastics Oscillator is already knocking at that door. I ask... what do you see?

Do you see a downward sloping Pitchfork model with a potentially much lower target price?

I will be adding small after this piece is published, but not aggressively. My panic point will be close to $197, as that would signify to me a solid break of the psychological $200 level. I see what's behind door number two, but I can not ignore what might be behind door number one.

Get an email alert each time I write an article for Real Money. Click the "+Follow" next to my byline to this article.
TAGS: Earnings | Investing | Stocks | Trading | Cybersecurity | Technology