.... knows the meaning of protection. Some readers may recall the old "Volvo" television ads. Vanbiesbrouck for those who don't know was a star goaltender who played in the National Hockey League from 1981 through 2002. At his peak, he was the best there was, winning the Vezina Trophy (Hockey's Cy Young Award) for the New York Rangers back in 1986. The ads would show him in all of his padding. The implication was that drivers interested in protecting themselves and their families would choose Volvo for their next automobile purchase.

I thought of that ad last night, as a bevy of cybersecurity type names went to the tape with their quarterly financial performance. Though folks may be driving less in 2020 than they have in years, they are certainly interested in protecting themselves, as perhaps even to a greater degree, their employers as offices remain empty, and the need for corporate security across a scattered labor force has never and may never be greater.

Zscaler (ZS) , for the firm's fiscal first quarter, posted adjusted EPS of $0.14, easily beating expectations. Revenue generation landed at $142.58 million, which was also a beat, and good enough for year over year growth of 52.3%. The real kicker here was adjusted gross margin, which came in at 14% versus expectations of 2.9%. That's not a misprint. Calculated billings increased 64% to $144.7 million. Cash provided by operations printed at $53.8 million, or 38% of revenue, compared to $21.4 million or 23% of revenue for the year ago period. The firm now has $1.416 billion in cash on hand, equivalents and short term investments. Zscaler took FY 2021 guidance for earnings and revenues well above sell side expectations as well.

For the firm's third quarter, CrowdStrike (CRWD) reported adjusted EPS of $0.08, which beat by, guess... eight cents. Revenue wound up at $232.46 million, not only another beat but annual growth of 85.8%. The firm added 1,186 net new subscriptions and hit $907 in annual recurring revenue. The firm has now increased Q4 guidance to points where even the low ends of projections are well above prior guidance. 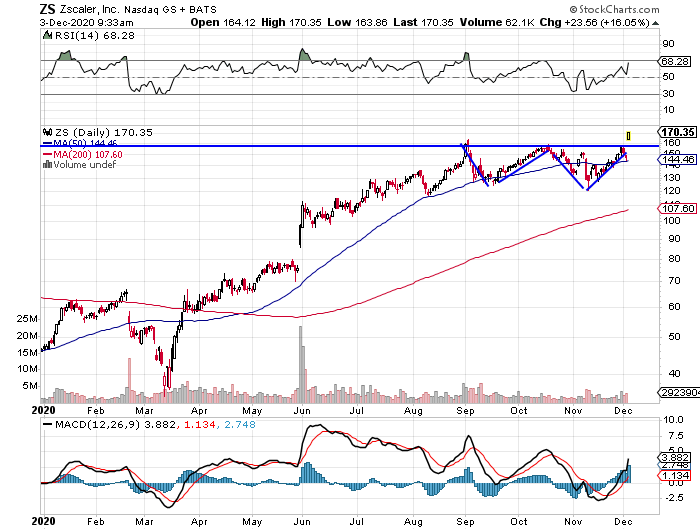 After the rally in ZS topped out in early September, the stock consolidated into what now looks to me like a double bottom pattern with a $158 pivot. I am long this one, so this is my actual homework on my own position. My new target price is $190. My panic point moves up to $145.

Similar to the chart above, only the double bottom is much tighter. The way I see it, this set-up places the pivot at $145, allowing for a target price of $174. However, being the double bottom is so tight, some might choose to see this as a cup with handle pattern. What that means is that the pivot could be as high as $154, which if taken and held could allow for a target as high as $185. I am not in this name. If I was, I would probably take the more conservative fork in the road.

I don't like this one as much. Even up 13%, OKTA is not trading close to the pivot created by the apparent flat basing pattern. The stock bears a pivot of $251, which means simply that among the three names, I see this one, at least technically, as the one least likely to break out of its current range.

Have a good day, gang. Now, go make some dough.

Get an email alert each time I write an article for Real Money. Click the "+Follow" next to my byline to this article.
TAGS: Earnings | Investing | Stocks | Technical Analysis | Trading