Early in, early out. Readers may recall some of the pieces that I wrote or things I said on television way back when Zoom Video (ZM) IPO'd in April of 2019, or almost a year later as we were putting together virus related or "work from home" portfolios. I was early in ZM, and made a few bucks. I also got out earlier than I should. Left more than a few bucks on the table. Why? I simply thought that once the issues that appear to have been resolved around security arose that businesses as well as individuals would turn to the competition more than they have. There's competition? Good question. I would have thought that Microsoft (MSFT) "Teams", or the platform at Slack Technologies (WORK) would have caught up, and or surpassed Zoom by now. It appears not.

Wish it was football. We'll have to take what we have. One major quarterly earnings release Monday evening. That would be Zoom Video with the firm's fiscal Q2 (2021) financial performance. You'll see the numbers after the closing bell. Tonight. Consensus opinion for earnings per share is $0.45, which would be good for annual growth of more than 460%. When Zoom Video reported back in early June, the firm guided to $0.44 to $0.46, so Wall Street is in line with the firm's own guidance. Of 26 analysts following the name that I am aware of, the high estimate for this EPS number is $0.54 and low would be $0.38. Twenty-two of these analysts have increased their earnings estimates at some point since, while none have cut expectations.

Revenue generation is a similar story. Consensus view for tonight is currently $500.4 million. This would be sales growth or more than 240%. The firm's prior guidance stands at $495 million to $500 million. Again, 20 analysts increased their own expectations for revenue at some point this quarter, while none reduced. Billings are expected to print very close to $550 million, while adjusted operating margin should approach 27%.

I think the company has probably been cautious, and that Wall Street has been cautious in straying too far away from corporate guidance. I think Zoom Video will probably exceed expectations this evening. That may not be what drives the stock from here. Tonight's guidance will draw even more focus than it has in the past.

The shares trade at more than 230 times forward looking earnings. Expensive? Of course. Does that always matter in 2020? Of course not. Stocks like these trade on news and momentum. Fundamentals will not matter until they do. Should the labor force return, at least in some size to working from centralized locations, well... services like this instantly become less valuable. Should multinational corporations withdraw to any kind of degree from being quite so global in their operations, well... services like this instantly become less valuable.

How to predict such development? Is it still way too early to even think like this? Not only are so many office workers still working from home with no hard date to return to their former "places" of employment, we see just how many colleges are truly struggling with re-opening live instruction. It's not just colleges, this threat of viral spread extends all the way down to pre-school.

So there. At least some degree of working or learning remotely is permanent. Large companies are starting to realize that their people are actually more productive and more accessible when they do not spend half of their daily lives on commuter trains. This will allow these companies to reduce overhead without reducing payroll. The victims here have been and will continue to be commercial real estate, and the businesses that thrived through servicing areas where large numbers of people worked. Then, one has to think of local tax revenues that will never recover. The ones that will not suffer will be the innovator, at least not at first. There will be a more competitive landscape however, moving forward. Whether it comes from Microsoft, Slack, or the likes of Cisco Systems (CSCO) that should have executed better in this space than they did. 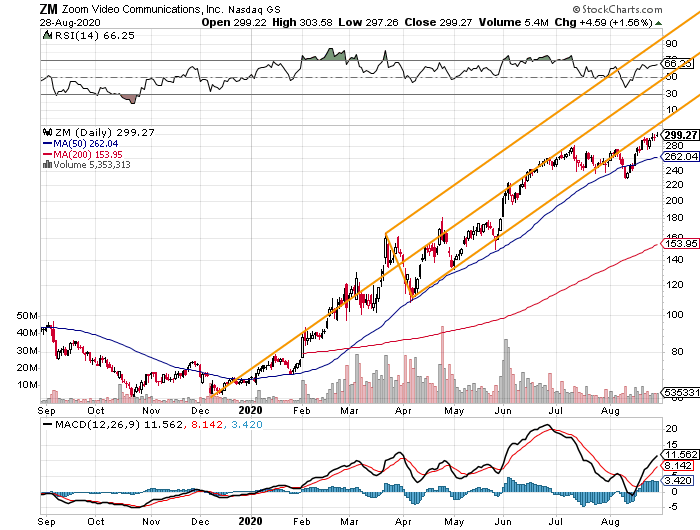 Readers will note that ZM lost connection to the Pitchfork model in early August that had been in place since early December. To me, this screams caution. I could be wrong. The Zoom Video story is far from over, but at some point managers who are up 44% in a quarter or 300% in a year and a half take something off.

I am feeling short-term bearish on ZM, but not with enough conviction to risk a large amount of unhedged capital. I am more likely to take a bearish shot through the options market that caps profit as it caps risk. Naked shorts are another name for gambling in momentum names. If we have not learned this from both Netflix (NFLX) and Tesla (TSLA) then we have not learned much at all.

The sideways to higher movement in the share price is not in my opinion, an accident, just a necessary slowing of momentum. I see the shares trading higher this morning, with a $308 handle.

Note: Obviously, the stock is moving around, and so are the spreads around these options. Strike prices may have to be adjusted by the time this piece is published. The idea here if one is in the bearish camp, is to risk $7.70 to try to win back $17.50. In other words, the max loss here is $770, while profit maxes out at 227%.

Get an email alert each time I write an article for Real Money. Click the "+Follow" next to my byline to this article.
TAGS: Investing | Stocks | Technical Analysis | Trading | Technology | Telecommunications | Earnings Preview