Monday night. Football? Nope. Earnings. Second quarter earnings have for the most part wound down to nothing. We still have about a month and a half until the big banks kick off the season for Q3. Here come the stragglers, or "off-season" crowd. This week, brings with it a few big names among what are really some slim pickings. Tomorrow (Tuesday), we'll hear from CrowdStrike (CRWD) , and on Thursday, Broadcom (AVGO) will step to the plate. Tonight, there is but one name that stands out. The firm that has kept businesses in business during the pandemic, namely Zoom Video (ZM) . The stock soared in 2020, as nearly everyone who could work from home had to lean on the platform. Now, the stock stands roughly 40% off of it's October 2020 peak, roughly flat for 2021 to date, and comes up against its first reporting season where the comps lap what were for this firm, quarters of extraordinary growth.

I can find 21 sell side analysts that cover Zoom Video. Consensus for adjusted EPS seems to be for $1.16 on revenue of $990.5 million. If realized, these numbers would amount to earnings growth of 26% on revenue growth of 49%. This revenue growth, while robust, would be a deceleration from growth of 191% for Q1, and the successive quarters of 350%+ prior to that.

It appears that of those 21 analysts, 18 have increased their EPS estimate at some point during the quarter, while two reduced those estimates. As far as revenue is concerned, 16 analysts have revised higher throughout the quarter, while there were zero lower revisions. Just last week, Robert Baird five star (at TipRanks) analyst William Power reiterated his 'buy" rating and $445 price target ahead of earnings, while Morgan Stanley four star analyst Meta Marshall upgraded the name from 'neutral" to "overweight", while taking his price target up to $400.

Currently, ZM trades at roughly 76 times 12 months forward looking earnings, and about 31 times 12 trailing months sales. The firm does not pay a dividend, and about two weeks ago roughly 4.2% of the entire float was held in short positions. One closely watched metric will be growth in the number of customers contributing more than $100K in 12 trailing months revenue. That growth came to 160% for Q1. One positive that investors can feel good about is the quality of the balance sheet, at least as it stood three months ago. At that time, the firm still had a large combined cash/short-term investment total position, no reliance upon goodwill to pad assets, and no long-term debt on the liability side.

Good company. Great balance sheet. Might be overvalued, especially if Delta had not come along and skewed what was shaping up as a spectacular economic recovery. The fact that Delta did show up, in my opinion, means that firms that intend to reopen their offices in full as soon as possible will not likely be cancelling accounts that enable them to have nearly their entire white collar staff work remotely.

The threat to Zoom's dominance will not come from a drastic change in business behaviors even if we do beat this pandemic as a people. The threat will come from the competition. Zoom did it best, first. That does not mean that Microsoft (MSFT) Teams with their deep pockets, and the Slack unit now part of the very well led Salesforce (CRM) family are not a threat to take market share.

Readers will note that Support for ZM showed up almost perfectly in May at a 61.8% Fibonacci retracement of the entire October 2019 through October 2020 rally. That puts the last sale, even now, far closer to established support than the top of the chart, and still below all three of our important moving averages (21 day EMA, 50 day SMA, 200 day SMA). 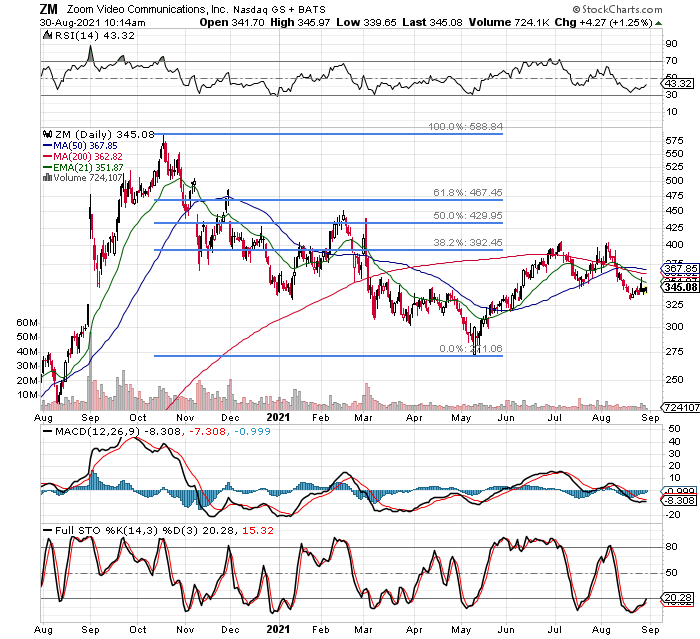 Meanwhile, the shares also hit resistance (twice) at the $400 level, close enough to a 61% Fibonacci retracement of the entire October 2020 through may 2021 sell-off. There is a lot of traffic to the immediate north. Those three moving averages come in at $351, $62, and $367. Tough to take all three, or in another light... possible to take all three in one move... with the Full Stochastics Oscillator screaming "Oversold" ! and the MACD positioned perfectly for an upside move. Only the RSI is neutral and it's not that neutral. The shares did put together a "golden cross" in August. My instinct says... we get a move here tonight. Options expiring this Friday are pricing in a $13 to $14 move for the shares in response to earnings.

I am more confident in the expected volatility than I am in the direction of the move. That said, my gut says get involved, but in a risk averse, bullish kind of way. I'm thinking a bull call spread simultaneously with a bull put spread. Check this out...

(AVGO, MSFT, and CRM are holdings in Jim Cramer's Action Alerts PLUS member club. Want to be alerted before Jim Cramer buys or sells these stocks? Learn more now.)

Get an email alert each time I write an article for Real Money. Click the "+Follow" next to my byline to this article.
TAGS: Earnings | Investing | Markets | Stocks | Technical Analysis | Trading | Media | Telecommunications