During Tuesday's Mad Money program, Jim Cramer told viewers about a number of stocks that younger investors have loved, including Zoom Video Communications (ZM) . Prices have fallen significantly from their October high so this is a good time to see how much tolerance these young investors have when prices do not go the way they planned.

In our review of December 1 we wrote that "The overall feeling I get from these three charts is that ZM could decline still further. A retest of chart support in the $300-$250 is possible. Avoid the long side until the dust settles."
Prices are retesting the lows of November so let's check again.
In this updated daily Japanese candlestick chart of ZM, below, we can see that prices failed at the underside of the cresting 50-day moving average line. The 200-day moving average line is still bullish but does not intersect until the $290 area.
The On-Balance-Volume (OBV) line peaked in last October. The Moving Average Convergence Divergence (MACD) oscillator went to a sell signal in early November when it crossed below the zero line.

In this weekly Japanese candlestick chart of ZM, below, we can see a bearish two-week candle pattern in early October - a dark cloud cover. The 40-week moving average line is still positive.
The OBV line has been weakening the past three months and tells us that sellers of ZM have been getting more aggressive.
The MACD oscillator crossed to the downside in early November for a take profit sell signal.

In this Point and Figure chart of ZM, below, we used daily price data. The software is reading the price action as distribution (selling) and projects the $305 area as a possible downside price target. 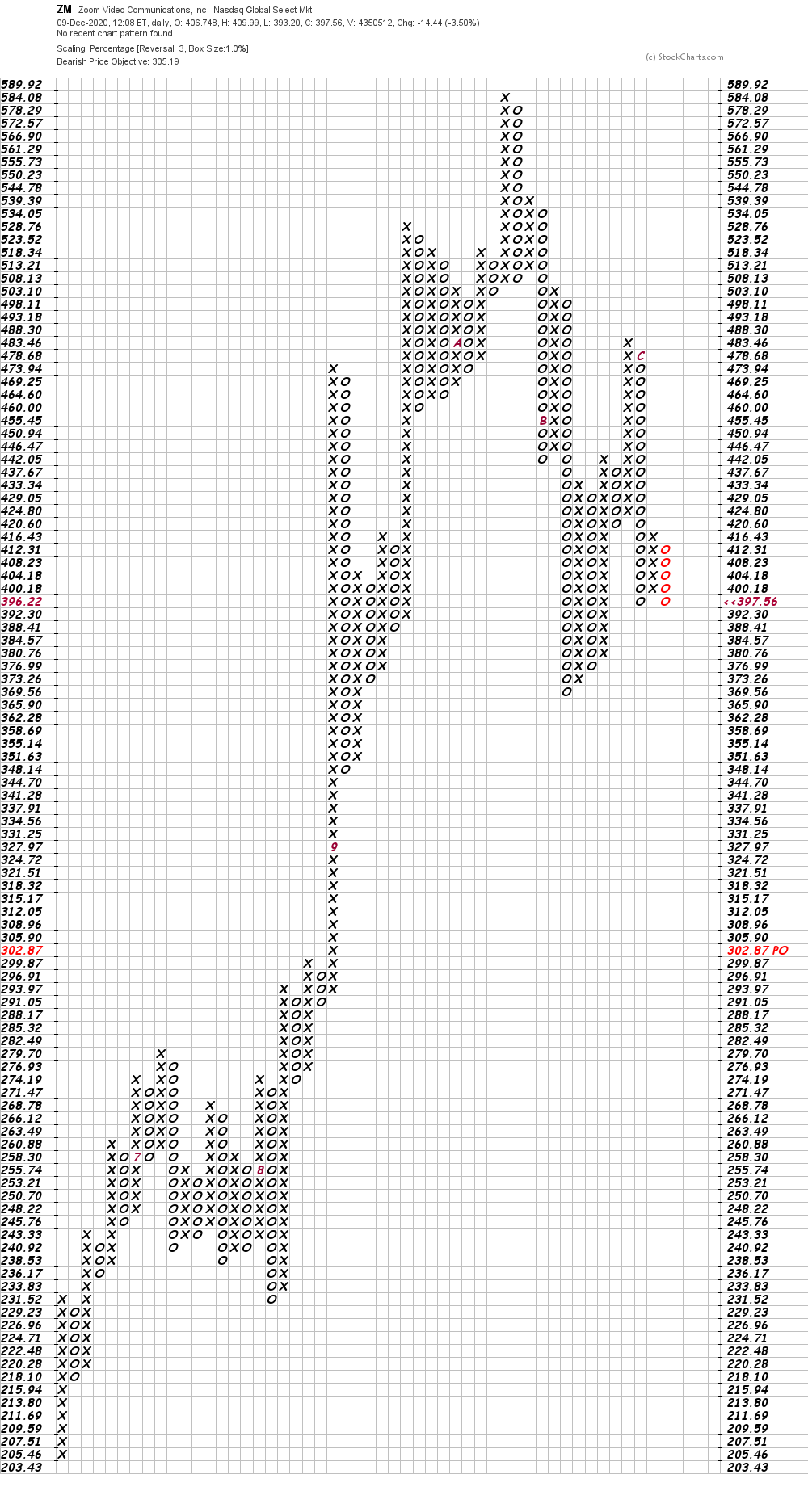 Bottom line strategy: I have no idea where the "younger crowd" began buying ZM and what tolerance that they have to sit through corrections, but things could get "interesting" if some of these new investors become traders when the tide is going out. A decline below $375 could precipitate further weakness.
Get an email alert each time I write an article for Real Money. Click the "+Follow" next to my byline to this article.
TAGS: Investing | Stocks | Technical Analysis | Trading | Technology | Telecommunications | Mad Money | Telecom Services

We are no longer in a bull market that will forgive our mistakes, so take precautionary measures. Here are a few I recommend.

Here's where to go long.

Jim Cramer: We're Back to the Market That Baffles

Welcome to the 'new' old world -- the world we had before all the new people and their money came into the market.

No Longer a Boom or Bust Cyclical Stock, Micron Technology Has Found Consistency

Here's where I would consider getting long.