Peck explained that with the pandemic, pet adoption has risen by 15%, and with so many people spending more time with their pets, they're noticing their pets' medical needs more than ever. Zoetis has over 200 product lines across eight species. And 13 of those product lines account for over $100 million in annual sales.

Peck noted that Zoetis is also seeing strength in their livestock business and China, which saw sales up 30% as the country recovers from a swine fever epidemic. China is also seeing an increase in pet adoption.

Let's check on the charts to see if they are worth adoption. The last time we looked at ZTS it was early in the pandemic and a lot has happened since March 12 when we wrote that "It looks like Jim Cramer and I are on the same page with ZTS - let it come down before considering the long side." We gave $109 as a potential downside target but prices sank to $90 in short order.

In this updated daily bar chart of ZTS, below, we can see that prices rallied from their March nadir in fits and starts to a high in early November. Prices have traded sideways the past two-and-a-half months. ZTS just closed below the neutral 50-day moving average line which it has been crossing since October. ZTS is above the rising 200-day moving average line.

The On-Balance-Volume (OBV) line shows weakness since early November and that tells us that sellers of ZTS have been more aggressive. The Moving Average Convergence Divergence (MACD) oscillator is just slightly above the zero line.

In this weekly bar chart of ZTS, below, we can see a positive longer-term picture. Prices are in an uptrend and trading above the rising 40-week moving average line.

The weekly OBV line shows strength from the middle of 2018 but turned sideways from this October. The MACD oscillator is in a take profit sell mode but narrowing perhaps to a new buy signal. 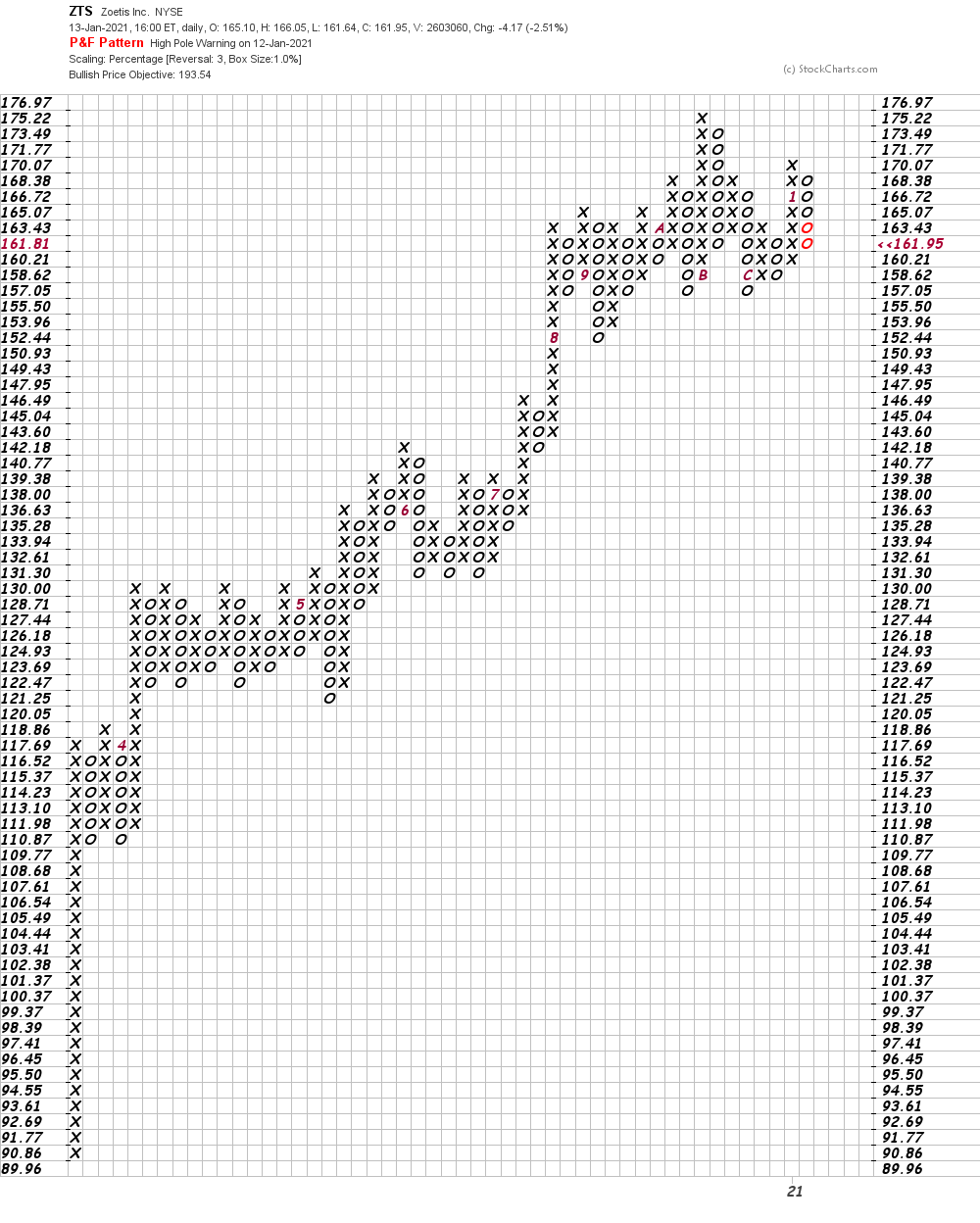 Bottom line strategy: It looks like ZTS can move higher in 2021 as our weekly chart and the Point and Figure chart suggest. The question is when. I would anticipate some further sideways price action before renewed strength. Buyers need to be patient.

Get an email alert each time I write an article for Real Money. Click the "+Follow" next to my byline to this article.
TAGS: Investing | Stocks | Technical Analysis | Trading | Pets | Pharmaceuticals | Mad Money | Executive Interview