Svane said that Zendesk is all about helping companies understand their customers through data. He said their customer relationship and customer experience platforms are built in the cloud and are easy for developers to build upon.

Zendesk currently has over 200,000 customers, nearly half of which are outside the U.S. The company is growing at 36% a year, Svane added.

Svane said that for customers like Netflix (NFLX) , Zendesk helps keep the production side of their business running smoothly, coordinating countless vendors across many projects to keep content streaming as it should.

Let's check out the charts of ZEN.

The daily On-Balance-Volume (OBV) line shows weakness from August to October and then only a modest rally from the middle of October suggesting that buyers have come back but not in a big way.

The Moving Average Convergence Divergence (MACD) oscillator gave a cover shorts buy signal in late October and it is now crossing the zero line for an outright go long signal.

In this weekly bar chart of ZEN, below, we can see nearly a five-fold rally over the past three years. Prices made a peak in July and are now below the 40-week moving average line which has rolled over.

The weekly OBV line shows a peak in July and weakness, telling us there has been some liquidation of longs.

The MACD oscillator is below the zero line in sell territory but turning upwards for a potential cover shorts buy signal.

In this Point and Figure chart of ZEN, below, we can see a breakout at $75.96 and a projected upside price target of $93. 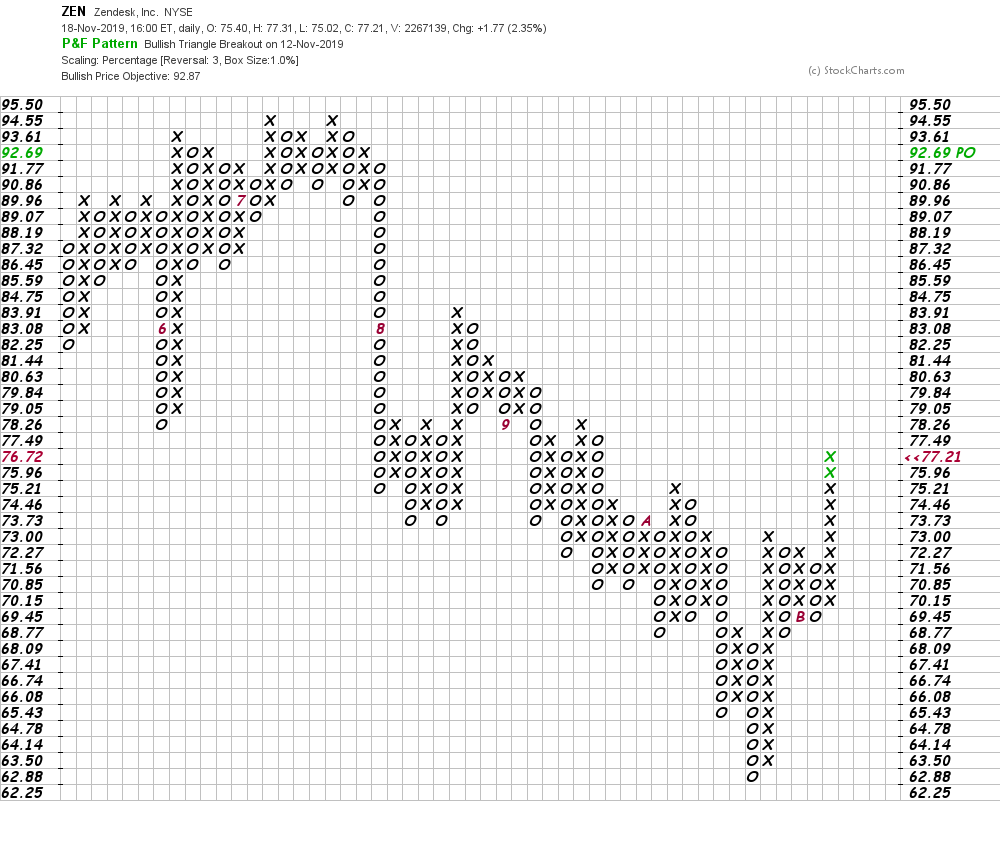 Bottom line strategy: ZEN could rally further to retest the highs of July but the volume pattern does not look strong enough for a straight up move. A period of sideways to lower price action is more likely and could probably attract more buyers.

Get an email alert each time I write an article for Real Money. Click the "+Follow" next to my byline to this article.
TAGS: Investing | Stocks | Technical Analysis | Trading | Software & Services | Mad Money | Executive Interview