Gustafsson said the pandemic has changed a lot of value behaviors. Companies are moving faster than ever towards digitization and automation, especially in health care, which is Zebra's faster-growing vertical.

Patients are expecting a digital experience, and technologies from Zebra help provide greater efficiency and overall patient care. Fewer errors translates to lower malpractice premiums, he said. That's why the company was able to raise their outlook for the year.

Let's check on the outlook for the charts of ZBRA.

In this daily bar chart of ZBRA, below, we can see that prices have made a strong rally the past 12 months. Prices are showing a smallish double top pattern in the $520 area in recent weeks but prices have so far held the March lows. ZBRA is trading below the flat 50-day moving average line. The 200-day moving average line is rising and intersects down around $370. The trading volume was heavy in February and early March during the first peak of this possible double top and that is not unusual.

The On-Balance-Volume (OBV) line shows weakness from late February and that tells us that traders have been more aggressive sellers for several weeks. The Moving Average Convergence Divergence (MACD) oscillator shows a peak in late February and a much lower peak in the middle of April even though prices reached the same peak. An interesting bearish divergence.

In this weekly Japanese candlestick chart of ZBRA, below, we see a mixed picture. Prices are still in a longer-term uptrend above the rising 40-week moving average line. The most recent candle shows a lower shadow telling us that traders rejected the recent lows and support around $450 held.

The OBV line shows sideways movement the past three months but a new low would tilt things more bearish. The MACD oscillator has crossed to a take profit sell signal.

In this daily Point and Figure chart of ZBRA, below, we can see that prices are in a down column of "O's" and that a trade at $450.94 would be a new low for the move down and could turn the chart bearish. Right now an upside price target of $648 is still being projected. 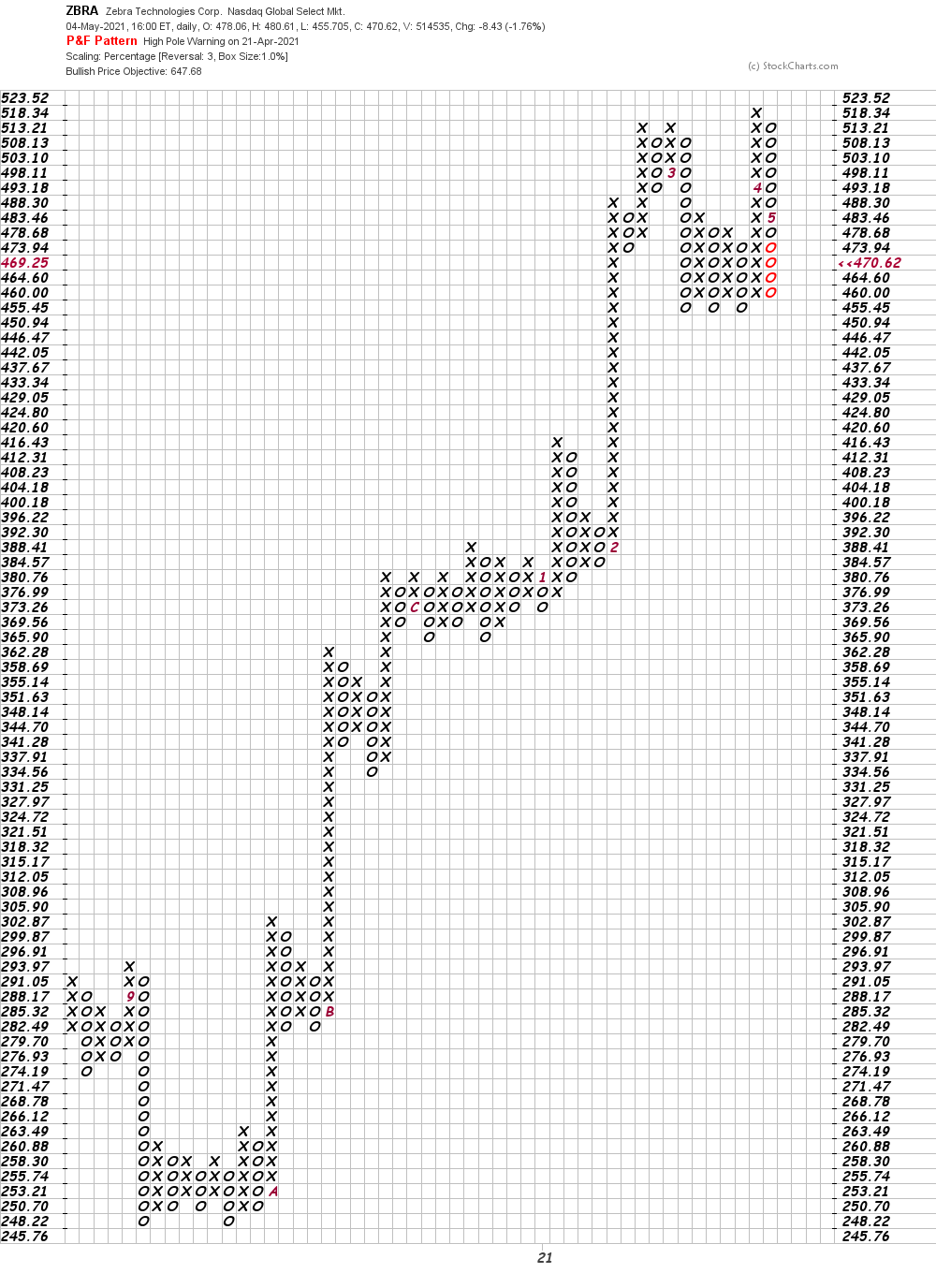 Bottom line strategy: The charts and indicators of ZBRA are touch and go right now. The picture is toppy but things could strengthen and the pattern could resolve itself into a continuation pattern. Prices need to hold their March lows. Be patient and wait.