During Tuesday's Mad Money program, Jim Cramer told viewers about the new young investors on Wall Street as they seem to have the edge on the pros. Younger investors that have been fueling the stock market's run to new highs and there are a host of stocks they love, including their cybersecurity favorite, Okta Inc  (OKTA) .

These stocks are about the future so let's see what the future of the charts may hold for OKTA.
In this daily Japanese candlestick chart of OKTA, below, we can see that prices made a low with the broad market in March. A strong rally developed off that low to high in July. The pattern of trading from July has shown us more pullbacks and corrections but new highs have kept coming.
Beneath the surface the indicators have shifted. Prices have tested the rising 50-day moving average line in September and November. The On-Balance-Volume (OBV) line has been flat to just slightly higher since July suggesting that buyers of OKTA are only slightly more aggressive.
The 12-day price momentum study shows lower highs from October to December while prices have made higher highs. This difference in movement is a bearish divergence and tells chart watchers that the pace of the rally has slowed. A slower pace in the advance can come from resistance or profit-taking or selling from fundamental traders based on things like valuation. A slower pace to an advance is a heads up that something could be changing.

In this weekly Japanese candlestick chart of OKTA, below, we can see a mixed picture. Last week we saw a big upper shadow on the chart telling us that traders rejected the highs. Prices are still in an uptrend above the rising 40-week moving average line.
The trading volume has been declining for several months and the OBV line has leveled off since June and has not confirmed the new price highs.
The 12-week price momentum study shows lower highs from June to December and that bearish divergence is more significant than the daily divergence.

In this daily Point and Figure chart of OKTA, below, we can see that a trade at $260 is needed to refresh the uptrend. Best chart support, looking at the volume by price bars, seems to be in the $220 area. A potential upside price target in the $315 is also displayed. 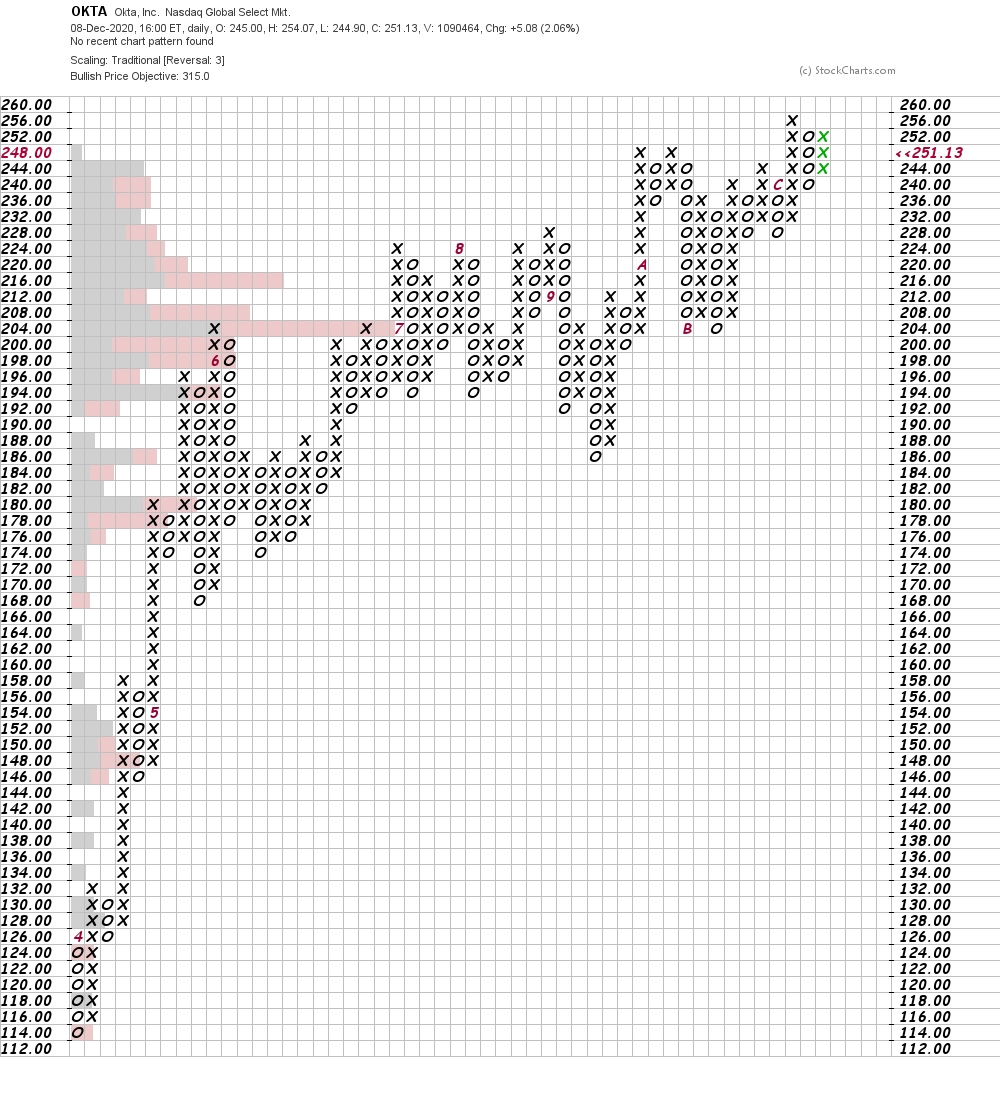 In this weekly Point and Figure chart of OKTA, below, we can see a potential longer-term price target in the $367 area. Not bad for younger investors.

Bottom line strategy: Back on October 10 we reviewed the charts of OKTA and wrote, "Call me old-fashioned. Call me out of step with today's market. I don't mind. What I do mind is seeing an upside breakout without a surge in volume. This is the time for traders to jump on board. Prices are pointed up but I am very cautious. Existing longs can continue to hold positions but I would raise sell stop protection to a close below $220 now. Maybe we'll reach $270 despite my concerns."
Longs would have been stopped out on the decline after our October 10 review. Yes, we know that prices have climbed to yet another new high but we also find bearish divergences on two time frames. The longer-term outlook for OKTA remains fine for now, however, the short-term picture remains problematic and vulnerable. I am certainly not a young investor so I would avoid the long side of OKTA into January and maybe February as the bearish divergences play out.
Get an email alert each time I write an article for Real Money. Click the "+Follow" next to my byline to this article.
TAGS: Investing | Stocks | Technical Analysis | Trading | Cybersecurity | Technology | Mad Money

Don't Get Stabbed by PINS