Readers may have noticed, especially if they are shareholders, that earnings releases have become dangerous affairs for Salesforce (CRM) in calendar year 2022. Wednesday night would be no different as the firm released its financial results for the third quarter of fiscal 2023.

For the three month period ended October 31st, Salesforce posted adjusted EPS of $1.40 (GAAP EPS: $0.21) on revenue of $7.837B. Both the adjusted earnings print and the revenue number beat Wall Street while that revenue print was good enough for year over year growth of 14.3% or 19% in constant currency.

Income from operations improved from just $38M one year ago to $460M, despite a 6.2% pop in operating expenses to $5.289B. Net income however dropped from $468M for the year ago comp to $210M as gains made from strategic investments dropped over that same time frame from $363M to $23M. This dropped GAAP EPS from $0.47 last year to $0.21. The lion's share of the adjustments to earnings came from stock-based compensation expense and amortization of purchased intangibles.

The firm announced on Wednesday that co-CEO Bret Taylor would step down from that position effective January 31st, 2023. Co-CEO Mark Benioff will become Chair and sole CEO of Salesforce, which is something that he has done before.

For the current quarter, the firm sees:

- cRPO growth of roughly 7%, after factoring in an FX impact of -3pts.

For the full year, the firm sees:

Salesforce ended the quarter with a net cash position of $11.918B, and current assets of $19.209B. One very noticeable take from this part of the balance sheet is the dramatic drop in accounts receivable from the year end quarter nine months ago. Current liabilities amount to $18.227B, composing mostly unearned revenue ($11.193B) and including $1.182B worth of shorter term debt. This puts the firm's current ratio at 1.05, which is fine, especially when considering what makes up most of these current liabilities.

Total assets add up to $91.884B. This includes goodwill and other intangibles of $56.153B. I have to admit that at 61% of total assets, this does bother me. Total liabilities less equity comes to just $32.533B to include $9.418B in longer-term debt. The firm has enough cash on hand to cover its entire debt-load, so whether or not I like the recognition of huge intangible assets or not is neither here nor there. This balance sheet stands on its own two legs.

Since these earnings were released last night, I have spotted 12 sell-side analysts rated at four stars of better (out of five) at TipRanks who have also opined on CRM. It amazes me how some of the best known analysts who often appear in financial media, do not make the cut when I do these. For example, both Dan Ives of Wedbush and Brent Thill of Jefferies opined on CRM, but did not make the four-star cut today.

Among the 12 analysts who did make the cut, there are 11 "buy" or buy-equivalent ratings and one "hold" rating. The average target price across those 12 is $202.83 with a high of $300 (Kash Rangan of Goldman Sachs) and a low of $162 (Karl Keirstead of UBS). Once omitting the high and the low as outliers, the average target price across the other 10 analysts falls to $197.20.

As I type I see the stock now down about 10%. Though performance really was pretty decent and the guidance, while not exceptional, is not truly weak, I feel as if there is a lot to "not like" here. It appears so do shareholders.

For one, the loss of Taylor as co-CEO clearly upset Marc Benioff. He could not hide his emotion on Wednesday night. I don't know if that's because Benioff was looking to step back and pass the baton, or if he just really liked working with the guy, but his unhappiness seemed at least to me... evident.

Beyond that, I don't like the huge misses for operating and free cash flows. The firm returned $1.7B to shareholders during the quarter. Well, maybe that's a little aggressive. At least until cash flows get back on track. I mean given the firm's history, I get the amortization of purchased intangibles, but $843M in stock based compensation expense? That's almost 11% of total revenue. I sort of gave CrowdStrike (CRWD) a pass on this yesterday, and it worked out well, but CrowdStrike only went public in June of 2019. Salesforce has been public since June of 2004.

Last night, Marc Benioff and CFO Amy Weaver mentioned increasing or expanding profitability a number of times. They are going to have to really mean it. Large adjustments like this can't go on forever. Or maybe they can. At some point, you are what your GAAP results say you are. 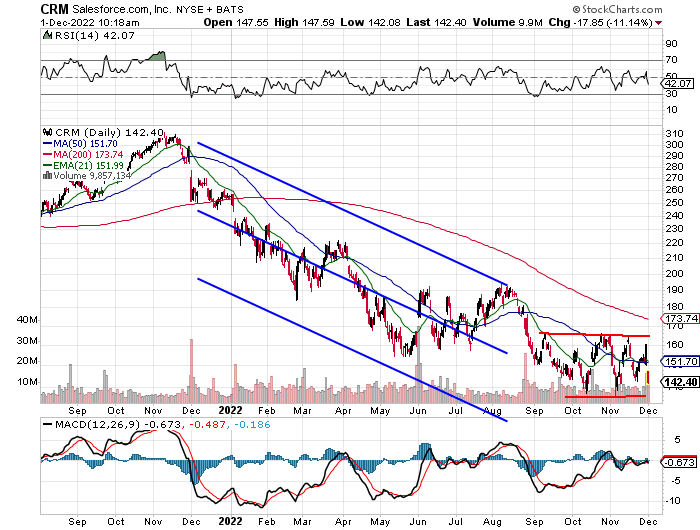 Shares of CRM have been bottoming or basing since September after a selloff that lasted from the Nasdaq peaks of November 2021 into late spring. Now the shares have surrendered both their 21 day EMA and 50 day SMA. This probably forced risk managers to pressure portfolio managers to shed some exposure.

I do not buy this dip in Salesforce and some of you probably remember that Salesforce is a former Sarge name. I have always liked Benioff's business style.

I see the $136 level as a line in the sand here. I will not initiate above that level unless I see CRM take back the 50 day line without me. That would be a nice rally at this point.

I would consider the sale of CRM December 16th $136 puts for roughly $2.25 as a means of gaining discounted exposure. If tagged, that would put the net basis at $133.75. If not, then it pays for a better than nice dinner with the bride. It might not be a crazy idea to purchase a like amount of December 16th $125 puts just as protection.