On Thursday evening, Netflix (NFLX) released the firm's fourth quarter financial results. The stock took off overnight. The shares were up over 6% in early market trading Friday, after giving up more than 3% during the regular session on Thursday.

For the three month period ended December 31st, Netflix posted GAAP EPS of $0.12 on revenue of $7.852B. The earnings print badly missed expectations for more than $0.40 and were representative of just $55M in net income, down from $607M for the year ago comp.

Readers will recall that Netflix launched the new, low priced, ad-supported subscription plan in November, which likely boosted subscription while pressuring margin. The firm ended the quarter/year with 230.75M paid subscriptions, which was up 4% year over year, while adding 7.66M new accounts for the quarter. This quarterly addition crushed Wall Street's expectations for roughly 4.6M adds.

I was going to write "steps down", but that's not really true. Co-founder and co-CEO Reed Hastings, who took on Ted Sarandos as co-CEO in 2020, has decided to step away from the daily running of the business and his role as co-CEO to become Executive Chair. Instead of going back to the one CEO corporate structure, Hastings will be replaced by Greg Peters as co-CEO. Peters is being elevated from his positions as COO (Chief Operating Officer).

For the current quarter, Netflix sees revenue growth of 4% (8% in constant currency). The firm sees modest positive paid net adds in the quarter, while also expecting an operating margin of 19.9%. This should result in net income close to $1.275B and GAAP EPS of $2.82. This would compare poorly to operating margin of 25.1%, and EPS of $3.53 on net income of $1.597B for Q1 2022. Part of this expectation for reduced year over year performance will be due to the timing of the firm's spending on content.

For the full year, Netflix sees double digit revenue growth and year over year growth in operating margin and profit. This in turn, would grow free cash flow. Based on FX rates at the start of 2023, the firm expects to target operating margin of roughly 18% to 20%.

Turning to the balance sheet, Netflix ended the quarter with a net cash position of $6.06B and current assets of $9.266B. Current liabilities add up to $7.931B leaving the firm with a current ratio of 1.17, which is perfectly fine. Total assets tally up to $48.595B. The firm claims no "goodwill" nor any other intangible assets. We like that. Total liabilities less equity comes to $27.817B. This includes long-term debt of $14.353B. Personally, I would like to see the cash/debt ratio improved upon, but that is just my way. This balance sheet is in good shape.

This is interesting. A bevy of sell-side analysts have opined on NFLX since these earnings were released last night. In order to streamline this process somewhat, I have omitted all analysts rated at less than four stars by TipRanks. Still, 18 analysts who rate at either four or five stars at TipRanks have said something about this stock since that time.

I know the shares are higher now that the markets are open. I must admit that I don't see cause for such a strong rally in this stock. The growth in subscriptions is a market positive, but the firm is less profitable than it was. The forecast is not terrific. Did Wall Street really want Reed Hastings out this bad? I did not see that coming.

I don't mind the balance sheet. Free cash flow is back on track. Those are positives as well. Still, the stock does not pay a dividend, and trades at a very expensive 31 times forward looking earnings, especially when one considers that this is not a growth stock and that is a growth valuation.

Can Netflix continue to grow at a pedestrian pace? Yes. Can it ever return to the salad days of its past? I know I am biased. Everyone is, but I subscribe to several of these streaming services. Netflix might, on a good day, crack my top four. I just don't see this price as a good entry point for investment. 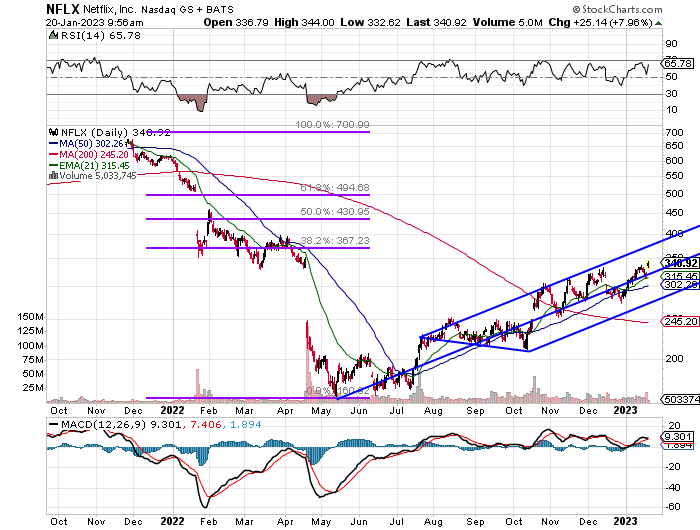 One can see on this chart that the stock has been in an uptrend since May and has more than doubled in price since. The stock has now filled the gap created in April, so any gravitational pull created there has now been sated. The next line of resistance would be the 38.2% Fibonacci retracement level of the late 2021 through May 2022 selloff at $367. Let's zoom in. 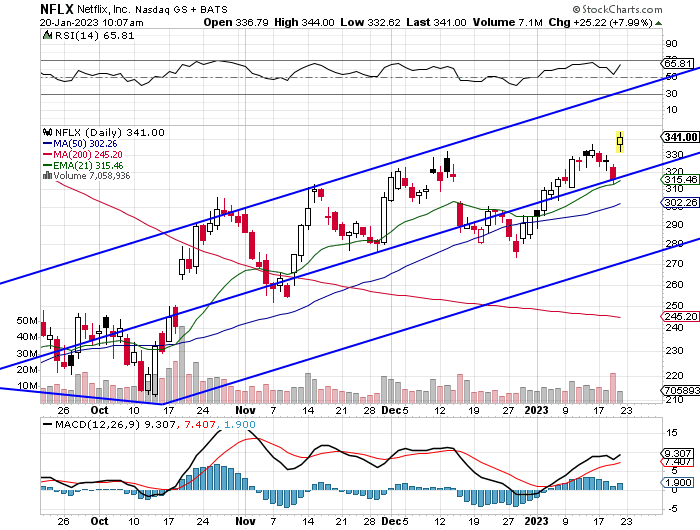 Should the Fib level not slow this stock down, trendline resistance should show close to $375. The stock is now trading almost $40 above its 50 day line and almost $100 above its 200 day line. My personal solution if one has missed this run (as I have) would be to trade Netflix, don't own it. This is not the place for entry (opinion). The stock may be ripe for a short-term short trade. I would have no problem getting short a few shares this morning after publication. That said, I will in no way whatsoever, carry that position into the weekend.

Get an email alert each time I write an article for Real Money. Click the "+Follow" next to my byline to this article.
TAGS: Investing | Stocks | Technical Analysis | Trading | Media | Movie Production | Movies | Earnings