On Tuesday night, delivery services giant FedEx (FDX) released the firm's fiscal second quarter financial performance. If you guessed based on past performance that the stock would be lower this morning... you'd be wrong!

There is plenty of good in here and plenty of not so good. Most of the "good" was driven by a high level of execution on the cost-cutting side. While that revenue print above was good for a year over year contraction of 3%, operating income contracted 64% to $1.176B largely on lower global volumes.

Operating expenses were reduced to $21.638B from $21.877B as reduced salaries costs related to purchased transportation more than offset increased fuel expenses. This left operating margin at 5.2% versus 6.8% a year ago.

Straight from the press release... The firm is prioritizing actions to quickly reduce costs in order to align fiscal 2023 costs with weaker-than-expected volume. The company has identified an incremental $1B in cost savings beyond its September forecast, and now expects to generate total fiscal 2023 cost savings of approximately $3.7B relative to its initial fiscal 2023 business plan.

FedEx is unable to forecast its mark to market retirement plans accounting adjustments at this time, and thus... cannot forecast fiscal 2023 results on a GAAP basis at this time.

For the full fiscal year 2023, the firm expects:

- Effective Tax Rate of 25% to 26% prior to those same retirement plan adjustments.

The stock trades at just 11 times forward looking earnings. Inexpensive. For a reason. Out of cash provided by operating activities of $3.125B, came capital expenditures of $3.142B. Hence, the firm posted slightly negative free cash flow.

Readers may recall that the firm's accelerated repurchase program was initiated during the quarter reported. 7.9M shares were delivered under the program. Remaining shares are expected to be delivered in December. Maybe completion of the program is a good thing with negative free cash flow.

The firm also pays shareholders a quarterly dividend of $1.15 ($4.60 annually) per share. This is good for a yield of 2.8%. If I am a shareholder, I would prefer preservation of that dividend over decreasing the share count in order to boost EPS.

Total liabilities less equity comes to $61.476B. This includes operating lease liabilities of $15.29B and long-term debt of $20.248B. While this is the balance sheet of a firm that can sustain the trajectory it's on, and the current situation is fine, I do find the debt level a bit elevated relative to the cash position. I would like to see this worked on.

Since these earnings were released last night, I have noticed eight sell-side analysts that are rated at four stars or better by TipRanks and have also opined on FDX. Across the eight, there are five "buy" or buy-equivalent ratings and three "hold" or hold-equivalent ratings. The average target price across the eight is $206.25 with a high of $240 (Brandon Oglenski of Barclays) and a low of $170 (Bascome Majors of Susquehanna). Once omitting the high and the low as outliers, the average target largely stays where it was ($206.67).

The firm is moving the ball in the right direction on cost-cutting. That said, the firm itself continues to see a light volume environment ahead. While the improvements made are welcome and the balance sheet is not really bad, there is a likely economic contraction on the horizon.

While reducing expenses will support margin, I am not really sure that I want to be in delivery services as the economy contracts in size. Additionally, if I do venture into delivery services, it would probably be into the shares of United Parcel Service (UPS) where there is a track record of excellence and the CEO... Carol Tome, who has a track record all her own. Tome had guided Home Depot (HD) out of the "Great Financial Crisis" as that firm's CFO.

That said, FDX is acting very well this morning. Let's take a look. 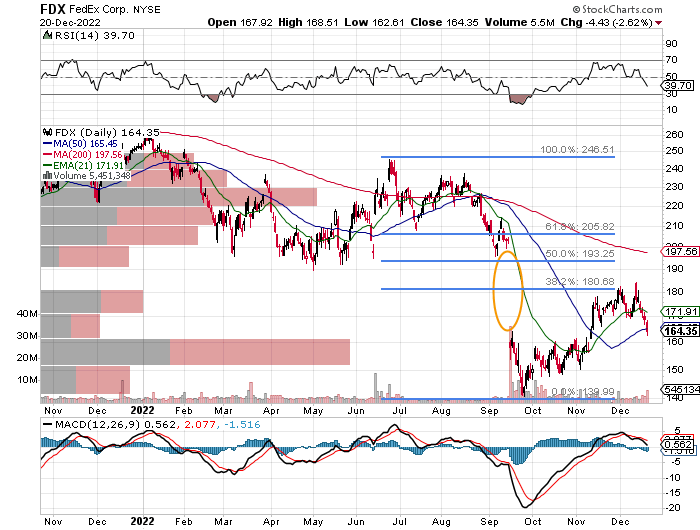 Readers will see that FDX created a still unfilled gap back in early September, and that every attempt to fill that gap since has met with resistance at the 38.2% Fibonacci retracement level of the June through September selloff.

Both the firm's relative strength and daily Moving Average Convergence Divergence (MACD) had been weakening ahead of these earnings. That changed this morning.

On top of that, readers will note that recent support has been built upon a volume-shelf. This means that downside risk, at least for right now (I am not talking about three months from now), could be limited. My feeling is that a trading range is likely created/extended. Support above $160. Resistance above $180.

Like I said I still prefer UPS, and it's 13x forward looking valuation and its 3.5% yield. That said, a trader interested in FDX who purchased some equity, could reduce net basis though the sale of covered $180 calls as well as $160 puts (where one might look to average down) expiring out in March.

The combined premiums from these two sales could knock $16 or so off of the trader's average point of entry even if that trader never has to pay $160 for more shares.

(UPS is a holding in the Action Alerts PLUS member club. Want to be alerted before AAP buys or sells this stock? Learn more now.)

Get an email alert each time I write an article for Real Money. Click the "+Follow" next to my byline to this article.
TAGS: Earnings | Investing | Stocks | Technical Analysis | Trading | Transportation