On Tuesday morning, Barclays analyst Thomas O'Malley lowered his price target for Micron Technology (MU) to $75 from $105 based on weak pricing in markets for both DRAM and NAND memory chips. O'Malley cautioned investors that the firm would likely provide weak guidance.

On Thursday afternoon, Micron Technology released the firm's fiscal third quarter financial results. For the period ended June 2nd, Micron posted adjusted EPS of $2.59 (GAAP EPS: $2.34) on revenue of $8.642B. The bottom line print beat Wall Street, and was based on net income of $2.626B. That number was up 51.3% from the year ago period. The revenue number, while up 16.4% year over year, matched the Wall Street's expectations. Gross margin improved to 46.7%, up from 42.1% a year ago, but down from 47.2% from the fiscal second quarter.

Compute and Networking drove $3.9B in sales, up 18% y/y. This is where you'll find the data center, graphics, and obviously networking.

Mobile Business drove $2B in sales, up 2% y/y. Smartphones, tablets.

CEO Sanjay Mehrotra commented: "Near the end of fiscal Q3, we saw a significant reduction in near-term industry bit demand weakness in consumer markets, including PC and smartphone. These consumer markets have been impacted by the weakness in consumer spending in China, the Russia-Ukraine war, and rising inflation around the world. Covid-19 control measures in China have exacerbated supply chain challenges for some customers, and the macroeconomic environment is also creating some caution amongst certain customers. Several customers, primarily in PC and smartphone, are adjusting their inventories, and we expect these adjustments to take place mostly in the second half of calendar 2022."

Remember what I told semiconductor investors ahead of Thursday's close on the Fox Business Network with Liz Claman... I told them to stay away from the consumer and find semiconductor names with less or almost no consumer exposure.

CFO Mark Murphy went into detail: "Long-term trends remain constructive; however, select market weakness and macroeconomic uncertainty are impacting our near-term outlook and visibility. Currently, we do project sequential bit shipments to be down for both DRAM and NAND in fiscal Q4 (current quarter). We intend to maintain pricing discipline and walk away from business which doesn't meet our pricing objectives. While we are taking proactive steps to control OpEx and CapEx, we expect the impact of these actions to be limited in fiscal Q4 and to become more material in fiscal year '23."

For the sake of illustrating just how much of a shock this guidance is, Wall Street had been looking for EPS of $2.60 on revenue of $9.05B.

Micron ended the quarter with a net cash position of $10.23B and inventories of $5.63B. This brings current assets up to $21.71B. Current liabilities amount to $7.01B, which is mostly plain old accounts payable. This puts MU's current ratio at a very healthy 3.09. Given that those inventories are probably going to have to be managed, omit them completely and Micron's quick ratio is still a very impressive 2.29. Micron is fundamentally sound and can easily meet their short to medium term obligations.

Total assets add up to $65.29B, including just $1.64B in "goodwill" and other intangibles. I am sure that the Micron brand alone is worth far more than that. Total liabilities less equity totals $16.02B including $6.86B in long term debt. The firm could pay that out of pocket if they had to. Micron's balance sheet passes the Sarge test with flying colors.

Okay, gang... I can find 12 sell-side analysts that are both rated at five stars by TipRanks and have opined on MU since these earnings were released last night. Many of these analysts have reduced target prices. This takes those reductions into account. There are nine "buy" or buy equivalent ratings across the 12. One of those nine did not provide a target price. There are two "hold" or hold equivalent ratings among the 12 and there is one "underweight" which is for our purposes a "sell" equivalent.

The average price for the 11 analysts that provided one is $78.27, with a high of $165 (Hans Mosesmann of Rosenblatt) and a low of $50 (Harsh Kumar of Piper Sandler). Mosesmann's target is $80 higher than the second highest, so he is currently a real outlier, and Kumar, who I follow closely, was our "underweight".

Omitting the high and low targets leaves us with an average of $71.78 for the other nine. The average buy equivalent target price is $86.88 with Mosesmann and $75.71 without. The average target price for the three "hold" or "sell" equivalents is $55.33. 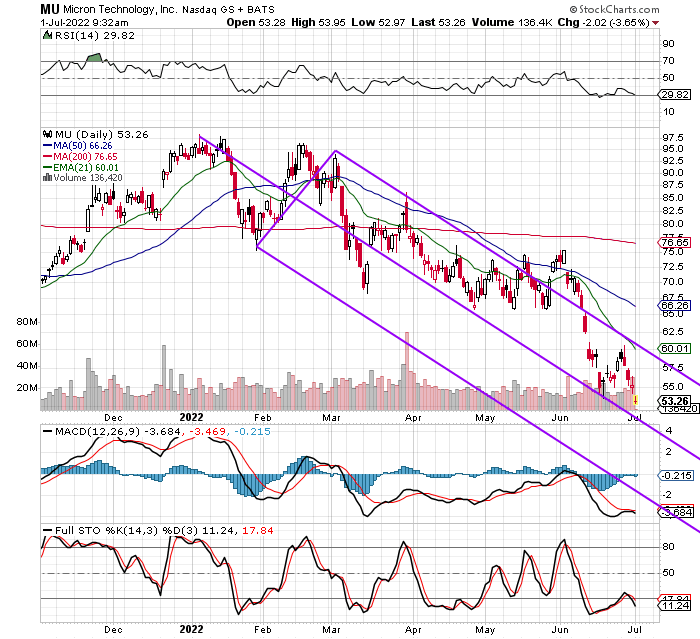 Readers will see that the shares tried to break out of a six month downward sloping Pitchfork in late May/early June. That attempt failed as the demand that CEO Mehrotra spoke of, weakened into quarter's end. Relative Strength, the daily MACD and the Full Stochastic Oscillator all weakened themselves at that time. The share price now approaches the model's central trendline.

The firm can handle what it is up against, The balance sheet tells us that. Can one invest in MU at these prices? I believe they can if they are willing to wait. The firm is sitting on inventory and so are enough of their customers. This is going to take a while. They told you that themselves.

My suggestion would be to wait further on Micron specifically and on memory more broadly. In fact, as I mentioned above, avoid the consumer. The consumer can not be aggressive right now.

If one is going to be in semiconductors, then one has to be prepared to work on those positions constantly. The semis are high maintenance. My focus is on cloud computing (the data center) and artificial intelligence. That theme has me long Advanced Micro Devices (AMD) , Nvidia (NVDA) and Marvell Technology (MRVL) . I have had to trade these names every single day in order to keep my face from being ripped off. I can do it, but there are no days where I can forget about these three.

As for consumer contact, AMD has some (PCs), Nvidia has some (gaming), but Marvell? Next to none. Down 48% year to date, trading at 18 times forward looking earnings... MRVL may just be the diamond in the rough.

(AMD and NVDA are holdings in the Action Alerts PLUS member club. Want to be alerted before AAP buys or sells these stocks? Learn more now.)

Get an email alert each time I write an article for Real Money. Click the "+Follow" next to my byline to this article.
TAGS: Earnings | Investing | Stocks | Technical Analysis | Trading | Semiconductors & Semiconductor Equipment