Salesforce (CRM) went to the tape on Tuesday night with the firm's third quarter financial performance. FYI, the firm had a very nice quarter and increased guidance for next year. Incredibly, none of this is the headline. The headline is the firm's widely telegraphed announced acquisition of Slack Technologies (WORK) in a cash and stock deal that places an enterprise value of $27.7 billion on the target. The price paid is seen by some as being a bit on the high side... a 55% premium to where WORK closed on November 24th, which was the last close before rumors started to swirl. The firm did not specifically say how the deal will be funded but it is expected that Salesforce will rely upon new debt as well as cash on hand (currently $9.49 billion) in order to pay Slack shareholders $26.79 in U.S. currency in addition to 0.0776 shares of CRM for each share of WORK.

Aggressive? Yes. CEO Marc Benioff is very aggressive. Is this "just buying growth"? In a way. I find nothing wrong with buying growth. Salesforce has acquired Tableau Software ($15.7 billion) in 2019, and MuleSoft ($6.5 billion) in 2018. If the goal is to eventually challenge Microsoft (MSFT) for the label of "Alpha Dog" across the landscape of enterprise software, Salesforce is spending what it needed to in order to get there. Now, Salesforce will compete directly with Microsoft Teams, in addition to already engaged in this fight with Microsoft Dynamics in the customer relationship management space. So, yes, this could drag on Salesforce for a bit. The deal is somewhat dilutive. I am long this name. I bought more last night just before the ARCA 8 pm close, even though well above net basis. If support is not found here in the high $220's as it was in October, I likely buy some more.

For the third quarter, Salesforce posed an adjusted EPS of $1.74, nearly beating the street by a full dollar. Revenue printed at $5.42 billion, another beat, and good for year over year growth of 20.2%. Twenty percent is good for almost everyone else, but almost seen as lackluster by those watching this stock, which is probably a little unfair given the current size of this business. Perhaps this is a driver of such energy in the c-suite. Bear in mind as firms grow larger, the pace of growth is difficult to maintain. Microsoft, by market cap, is more than seven times larger than Salesforce. Microsoft only grows revenue by a rough 12% to 14% annually these days, and that's considered excellence.

For the period, subscriptions and support sales grew a rough 20%, almost matching revenue growth. Cash from operations ($340 million) only grew 14%. The rest is believed to have been generated by a successful investment in Snowflake (SNOW) . SNOW reports this (Wednesday) afternoon, by the way. Growth was consistent across the sales cloud, the services cloud, and the Salesforce platform. Billings grew by 18.7%, well above consensus. 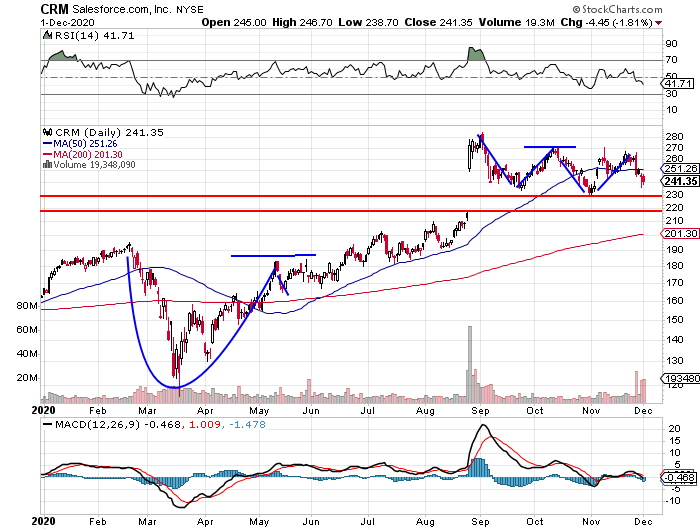 For the purposes of creating a new plan, I wanted to tell the whole story through illustration. You see the cup with handle pattern last spring that produced the summer breakout. You see the downward sloping double bottom/triple top that had created a $270 pivot now likely to whither and die on the vine. The most important graphic on this chart is the gap created in late August between $220 and $228. I grabbed a few shares at $229 late last night on the odd chance that the October lows might hold.

In early morning trade, I see CRM trading with a $226 handle, violating the gap. I expect that should this condition exist into the regular trading session, that the gap will likely fill. I expect to add. Salesforce believes in what they are doing. On this, I have no doubt. I believe in CEO Marc Benioff. On that you can have no doubt. He is purely aggressive. Is this always a good thing? Maybe not, but my gut tells me that it is good more often than it is bad.

Target Price: Was $325. This target is suspended.

Panic: $201 (200 Day SMA). This is where my rising net basis and a decreasing share price would end up getting too close for comfort.

Right, now I still have a nice win. A lot less nice than it was 24 hours ago. We never let our winners become losers. I don't think I will have to worry about that, but traders must know where both their feet and the "out of bounds" lines are. I will come up with a new target price for you. Truth is that I need to recognize a new pattern first.

(CRM and MSFT are holdings in Jim Cramer's Action Alerts PLUS member club. Want to be alerted before Jim Cramer buys or sells these stocks? Learn more now.)

Get an email alert each time I write an article for Real Money. Click the "+Follow" next to my byline to this article.
TAGS: Mergers and Acquisitions | Earnings | Investing | Stocks | Technical Analysis | Trading | Technology

The Goods News? September Is Almost Over

The bad news? Let's list it out here, and I'll tell you how I'd play a day like this.

Don't Judge a Market by Its Looks

Yes, it's ugly out there, but looks can be deceiving. Let me explain why I'm optimistic.

It's the question of our time: Where are the people willing to take on these better paying gigs? Let's see what's going on and what we need to happen.

The automaker intends to make an even-bigger investment in EV production than outlined just a few months back.

The big retailer's chart indicates a possible low could be coming this week, though there is reason for caution.