Remember the Crackberry? So many people I know hung onto their last BlackBerry (BB) smartphone, the ones with the physical keyboards, for as long as possible. That business is just one that provides some licensing revenue at this point. The frim doesn't even manufacture smartphones, just getting something for the brand-name through licensing it out to third party manufacturers at this point. As the firm has tried to reinvent itself for a number of years now, there have been patents to protect, acquisitions made, and a new direction taken.

There is the "sort of legacy" business that lends out that brand name as well as charging royalty fees for thousands of patents. Then there's the Software and Security Services business unit that includes "Spark". Spark contains as already mentioned... software, and security but also the Internet of Things (IoT) products which is where the firm seems to see a future for itself. It is here that we find the QNX automotive operating system and the AtHoc and SecuSUITE secure communications services.

Do I think BlackBerry can still turn this "battleship" around? I don't know, but it certainly does help that firms like Amazon (AMZN) through AWS and Chinese tech giant Baidu (BIDU) have expanded on corporate relationships with the firm.

BlackBerry is expected to report fourth-quarter earnings tonight (Tuesday). Investors should know that BlackBerry has agreed to stop adjusting reported revenue after receiving a comment letter from the Securities and Exchange Commission that questioned the practice. Adjustments related to acquisitions that would not be allowed under GAAP practices had been included in the recent past, which had created upside reported revenue surprises for the frim. The firm has highlighted non-GAAP revenue as such, and will no longer include non-GAAP revenue figures in these quarterly releases starting with the fiscal year that began on March 1st. (So, not what you see tonight.)

For this evening, Wall Street (all of six analysts) is expecting Q4 EPS to land at $0.03 on revenue (Only four analysts ventured an estimate for revenue.) of $248 million. This would be earnings growth of -66,7% on revenue growth of -14.8%. Gross margin is expected to print at 71.8% and EBITDA of close to $35.5 million is expected.

Is there a lot here that would have a trader run out and grab some of these shares for a trade? Probably not. Is there reason to invest? Yes, I see a reason to invest. The name is among those comprising the Stocks Under $10 portfolio that Chris Versace and I run together, for a reason. 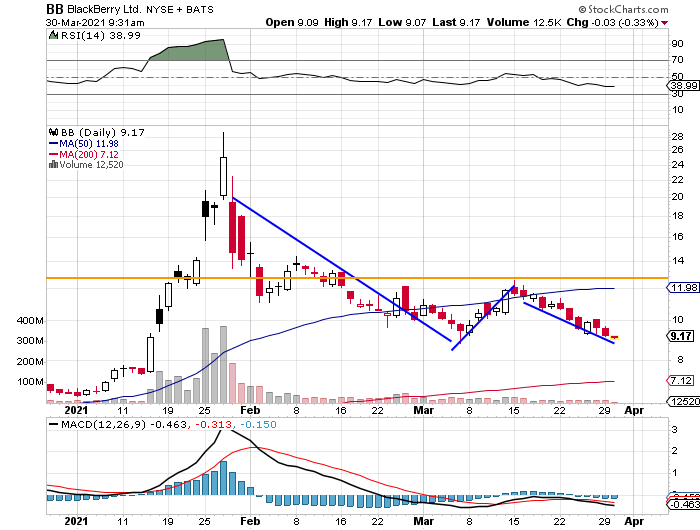 There's a lot going on here. You have about three quarters of a "double bottom" pattern formed already, coming off of the meme stock highs. All you need is a turning point for the stock right about here. That said, earrings are due Tuesday night. How convenient.

Relative Strength is getting close to being oversold. The daily Moving Average Convergence Divergence (MACD) looks very weak, which can be a positive (sometimes). Should there be an earnings-related lift, the pivot would stand at a rough $12.50. The shares take and hold $12.50, there's decent chance that they see $15.

Note: Writing the call that expires this week reduced net basis by $0.30, but does limit profit on the equity position to the possibility of having to sell the position at $10.50 should the shares spike higher this week. Writing a "covered" call does not increase downside equity risk at all, there is just some potential opportunity cost. Can you live with that? A forced $10.50 sale this week would still be an 18.4% profit for two days work. I've done a whole lot worse in my time.

(Chris Versace and Stephen "Sarge" Guilfoyle are co-portfolio managers of Stocks Under $10.)

Get an email alert each time I write an article for Real Money. Click the "+Follow" next to my byline to this article.
TAGS: Investing | Options | Stocks | Technical Analysis | Trading | Software & Services | Earnings Preview