Has there ever been a stronger quarter reported? Maybe. Just can't quite remember when without resorting to an internet search. Probably not in a pandemic hampered environment while being measured against consensus view, or the firm's own prior outlook for that matter. Nope. Salesforce (CRM) , king of the "Cloud Kings" certainly stole the show on Tuesday night. In fact, Salesfroce stole the season. Just a day after being informed that the shares would replace Exxon Mobil (XOM) in the Dow Jones Industrial Average. Recognition for the cloud? Acknowledgement of the declining importance of the place held by fossil fuels in post-modern economies? Huzzah.

For the firm's fiscal second quarter, Salesforce reported an adjusted EPS of $1.44, basically doubling Wall Street's expectations. Pull out the adjustments, and the shares earned $2.85, beating by "roughly $2.85", even better. Revenue for the quarter landed at $5.1 billion. This was good for "in line" with prior quarterly growth trends at +27.5% year over year for a period where inline growth had not been projected. There are many business lines involved, and I can't find one that did not outperform. That said, there are two metrics that every investor that maybe just peripherally follows these kinds of stocks needs to track.

These two metrics would be Billings and what is known as "Current Remaining Performance Obligations", or "CRPO bookings" for short. This number is an aggregate of both order backlog and deferred revenues. For the quarter, CRPO bookings tallied up to $51.2 billion versus the $14.09 billion that the industry expected. Billings for that matter, totaled $4.63 billion. The street was looking for $4.05 billion there.

There is so much good in these numbers, I almost do not know where to begin in my enthusiasm. Among business lines, Subscription and Support grew 29%. Professional Services saw a 23% increase. Both beat Wall Street. Beneath this data is growth in the Salesforce platform, which includes the acquisition of Tableau Software. This growth came to 66% year over year, which could be expected, but still grew 25% ex-Tableau. Sales growth was robust globally across The Americas, the Europe, Middle East & Africa, and across the Asia Pacific regions.

There were also serious beats everywhere else investors needed to see them. Adjusted operating margins just crushed expectations at 20.2%, which led to impressive growth in free cash flow.

What's interesting is this. CRM closed on Tuesday night at $216.05, up more than $8 on the Dow Jones Industrials inclusion. The shares in Wednesday morning's pre-opening session were trading with a 247 handle on the earnings news, and then an entire spate of increased target prices from sell-side analysts. At this current last sale... Salesforce would go into the Dow Jones Industrial Average, which is price weighted, with the third greatest daily impact on the index itself. Amazing. 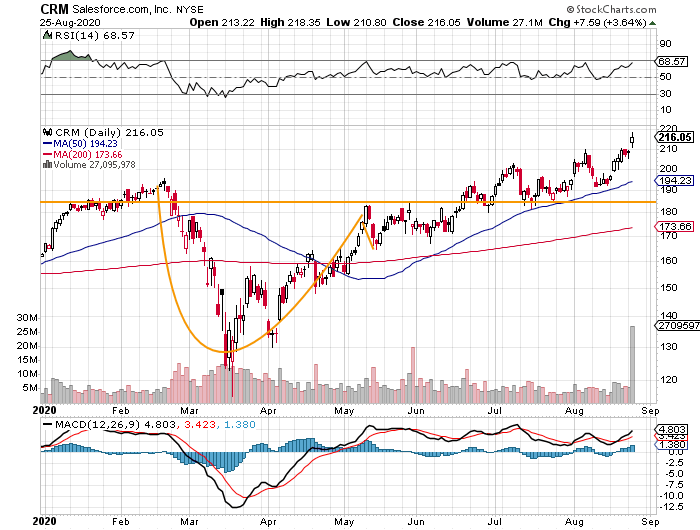 The shares will gap higher on the opening bell Wednesday morning. The second day of a now quite profound spike. As businesses try to remain relevant post-pandemic, the demand for what Salesforce provides and does better than anyone else will grow. Do I think that these shares can approach the $300 level? Yes, I think that they can. Does one consider adding today? No, not at the high of a two day rampage. There will be other days.

My old price target of $219 will be obliterated. Out of sheer discipline I am likely to make a sale this morning. That in no way means that I am not a fan, nor does that mean I won't buy back more shares than I sell, once a couple of managers decide they need the profits... and at some point they will. Perhaps a Fed chair will make a speech or something. Perhaps a sliced and diced Apple (AAPL) will stop carrying the indices. It happens.

(Salesforce and Apple are holdings in Jim Cramer's Action Alerts PLUS member club. Want to be alerted before Jim Cramer buys or sells these stocks? Learn more now.)

Get an email alert each time I write an article for Real Money. Click the "+Follow" next to my byline to this article.
TAGS: Earnings | Investing | Markets | Stocks | Technical Analysis | Trading | Software & Services | Technology