The Fall Classic. Six games down. Six road team victories. I'm told that TV ratings are way down for the World Series this year. They are missing something special. Deciding game? Max Sherzer vs. Zack Greinke. The first time in baseball history that two former Cy Young Award winners will face off in a World Series game seven. Seaver/Catfish? That was game six. Poor Yogi. As a student of the thinking fan's game, I found this surprising.

Though that game will be played this (Wednesday) evening, the real ace made an appearance on Tuesday night. The real ace, where as the semiconductor space is concerned, is Lisa Su. The shares may have come in. A little. The numbers may look a little wobbly. Only if you don't know. Know what? What a story this is. What a victory this is. Like stories where the underdog fights back. Then for you, and for every kid who put up a fight when the tough kids showed up in the school yard, the story of Advanced Micro Devices (AMD) is your story.

The bell finished ringing. I had a lot of money on the table. Quite a few of my names were reporting. It took AMD a few minutes. I kept hitting refresh. There it was. Hmm. Okay. Not going to hit target. Not going to fall enough to buy. For now. AMD reported third quarter adjusted EPS of $0.18, meeting consensus. Revenue of $1.8 billion, though up 9.1% year over year, missed the street by just a smidge. This revenue number, mind you... lest you judge, is the highest print in this space for the firm for one quarter since 2005.

Operating income hit the tape at $186 million, up sequentially from $59 million, and from $150 million for the same quarter last year. Net income of $120 million showed similar quarterly and annual improvement. Gross margin, by the way, improved from 40% to 43%, which is the highest gross margin that AMD has posted in seven years. I told you. Victory. As I will demonstrate, there is some business segment lumpiness that forced some conservative guidance, but this firm is operating at a level many thought that it would never see again.

The largest and most important business segment for Advanced Micro Devices is the Computing and Graphics segment. This group covers GPUs and PC CPUs. That unit put revenue to the tape of $1.28 billion. This number beat expectations, grew 36% year over year, and at least on the PC CPU side, put together the best sales quarter since 2011. My Real Money colleague, Eric Johnsa pointed out in his piece on the matter that Intel (INTC) in their earnings release just last week reported that sales for it's Clint Computing Group had contracted 5% from Q3 2018. That's called taking market share from a giant where I come from.

The second largest unit did not fare nearly as well. This would be the Enterprise Embedded and Semi Custom segment. Revenue for that group dropped 27% to $525 million, a nasty miss even with lowered forecasts coming in. This is the unit that largely supplies gaming processors to both Microsoft (MSFT) for Xbox One, and Sony (SNE) for Playstation 4. That group does not likely strengthen until sales of gaming consoles strengthen. At least, AMD is heavily involved with the major players in that space.

On the call, CEO Lisa Su rightfully stressed, in my opinion, the many year highs for revenue, and gross margin as well as the significant increase in net income. The guidance, as I mentioned... was conservative, which is smart going into a quarter with a lot of unknowns still in the air. At this point, the firm sees Q4 revenue spanning a range of $2.05 billion to $2.15 billion. Consensus had been at the high end of that range. The firm does expect to improve already lofty gross margin to 44% for the quarter. 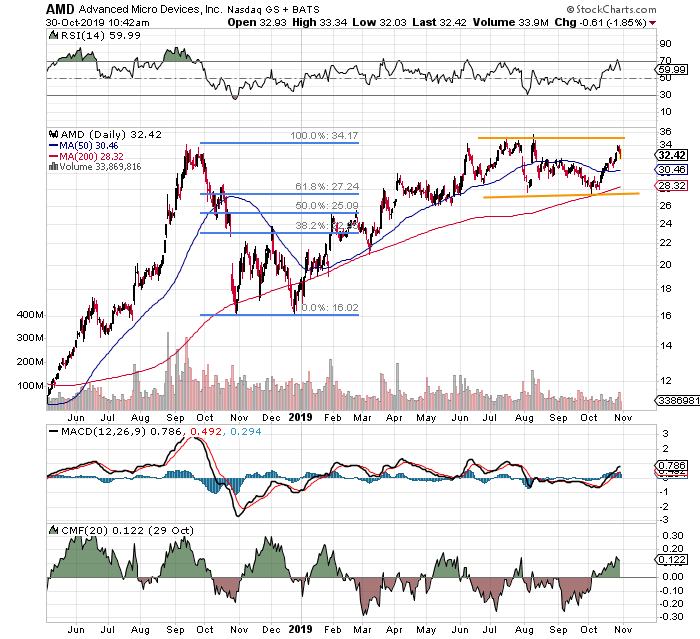 One quickly sees that Relative Strength and Money Flow are very strong. I left the Fibonacci model that I drew up for you back in 2018 on the charts to point out that these shares had completed a 100% retracement of that late year selloff by early summer of 2019, and have traded in a basing pattern ever since.

The shares came into mid-October once again testing that pivot point from below, but are now trading a bit lower. My short-term target has been that pivot. With a little post-earnings push perhaps created though improved prospects for global growth, a take of that level could easily land the shares up around the $42, Though I make that case, that level is not yet my target. I would love to add at the 50 day SMA, but I'll pull the plug at the 200 day line.

Notes: The trader purchases the opportunity to pay $36 in January, and more than pays for that right by exposing him or herself to equity risk at the $30 level in the same month. Should the trader exercise the call at that time, the trader would be long 100 shares at a net basis of $35.85. Should the shares collapse over the next three months, the trader could end up long 100 shares at a net basis of $29.85 with the shares trading lower than $30.