For his final "Executive Decision" segment of Wednesday night's Mad Money program, Jim Cramer sat down with Avishai Abrahami, co-founder and CEO of Wix.com (WIX) , the web publishing platform with over 140 million users around the world and shares that are up 54% for the year, despite the recent broad market decline.

Abrahami said that Wix helps small businesses look just as good as the big guys, and their new Ascend service will allow those same business to attract and communicate with their customers just like the big guys as well. The new offering boasts a suite of communication tools to help improve the customer relationship at a low monthly starting price.

Cramer said he saw no reason for the recent weakness in the shares of Wix, but let's check out the charts and indicators anyway.

In this daily bar chart of WIX, below, we can see that prices doubled from January to the end of September. Prices have corrected lower since early October and a number of sell signals have been generated. In early October WIX fell below the 50-day moving average line and its slope quickly turned negative. The rising 200-day moving average line was tested in October and was broken in November.

Recently, bounces in WIX have failed at the underside of the now cresting 200-day line. The 50-day line is now poised to test or break the 200-day line for what is commonly called a death cross. This sell signal comes well off the $120 zenith.

The daily On-Balance-Volume (OBV) line started to show some weakness in early October but has inched up a little from the middle of November. I am not sure what to make of two volume spikes in recent weeks.

The trend-following Moving Average Convergence Divergence (MACD) oscillator fell below the zero line in October for an outright sell signal.

In this weekly bar chart of WIX, below, we can see a very impressive rise over the past three years but we can now see a number of negative signals. Prices have now spent a number of weeks below the cresting 40-week moving average line. If you had enough foresight to go long WIX in early 2016 you could boast that they went up six fold.

The weekly OBV line has been declining since early June and that suggests that sellers of WIX have been more aggressive.

The weekly Moving Average Convergence Divergence (MACD) oscillator crossed to the downside in late September for a take profits sell signal. The MACD oscillator is now close to the zero line and an outright sell signal.

In this Point and Figure chart of WIX, below, we can see a downside price target of $80.76. This would be a new low for the move down and would refresh the downtrend. 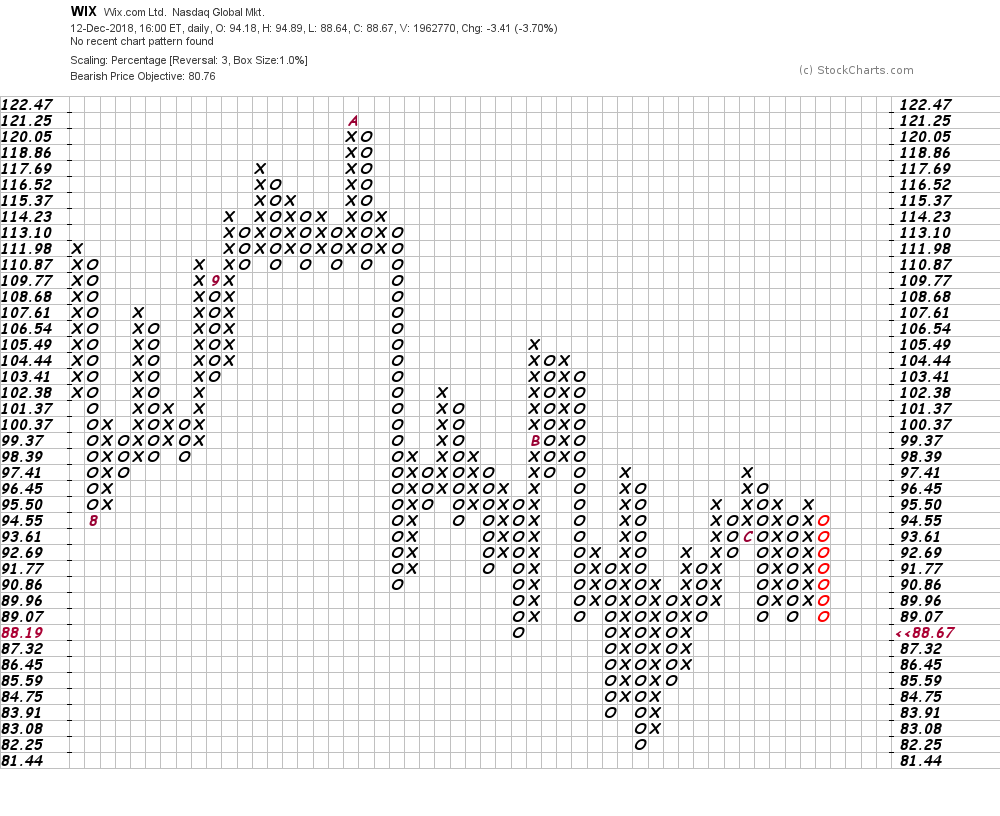 Bottom line strategy: WIX might get a move higher from a year-end bounce but our view would be that more downside risk remains with an $81 downside price target.

Get an email alert each time I write an article for Real Money. Click the "+Follow" next to my byline to this article.
TAGS: Investing | Stocks | Technical Analysis | Trading | Software & Services