It wasn't a particularly great end to the week for companies reporting earnings last night, especially in the tech sector. There were a few winners, but names like Universal Display (OLED) , Fastly (FSLY) , Appian (APPN) , Workiva (WK) , and Zscaler (ZS)  are left seeing red today.

After the close last night, cloud cybersecurity company Zscaler reported a strong second quarter with earnings of $0.09 per share on revenue of $101.3 million. Both results surpassed estimates of $0.03 earnings per share on $98.97 million in revenue. The company bumped revenue estimates for both the third quarter and full-year about 1% above current projections. Unfortunately, the earnings guidance for both the third and fourth quarter came up short, one being more obvious than the other. For the third quarter, management guided investors to expect earnings per share between $0.01 and $0.03, which is short of the current $0.04 estimate. For the full-year, EPS of $0.14 to $0.16 falls in line with the current $0.15 estimate, but after a $0.06 beat in Q2 and a shortfall of $0.01 to $0.03 for Q3, it implies Q4 will likely be short by a few pennies as well.

Unfortunately, ZS caught the market on one of the few unforgiving days we've seen in 2020. The good news is the top line continues to churn along, and if not for a one-time legal settlement of $15 million, the company would have produced free cash flow of $13.1 million in the quarter. Of course, the settlement counts, but investors should expect a resumption of strong free cash flow in future quarters, and with plenty of cash on the books ($385 million) against no debt, the balance sheet is very strong.

Today should mark the fourth straight post-earnings red close in a row. That's a trend worth noting going into the next quarterly report. Volatility has also remained high as today is the seventh time in the past eight reports that the stock has traded with a change compared to the prior day of 10% or more on an intraday basis.

When the stock finished post-earnings red in May 2019, it only took it a week to reverse the post-earnings loss. Unfortunately, the September and December red closes did see green again for many weeks. It took four months to close the earnings gap lower left from the September report. The December drop required just over five weeks before pre-earnings buyers were flat again. 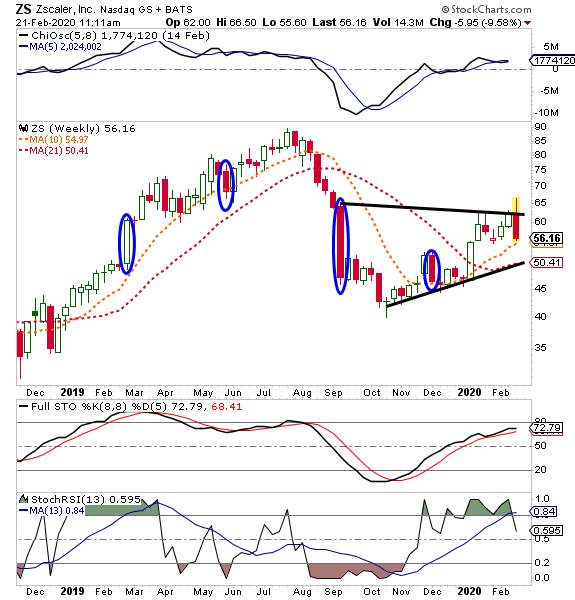 History is somewhat against the bulls, but the 50-day simple moving average (SMA) is looking around $54.50. That SMA stemmed the flow of sellers in December, and it may hold up again here. If I were a dip buyer, I'd be looking there, or slightly below, like in the $50 to $52 range. The weekly chart pegs $50.41 as the rising support level, which perfectly coincides with the 21-week SMA.

On the upside, yesterday's close becomes new weekly resistance. Secondary indicators are turning against the bulls, which should be no surprise considering the nearly 10% drop on the week. As we're sitting right in the middle of the current weekly trading pennant, I see no reason to push or pull either way today. Wait until we see a test of support or a breakout above (or failed test of) resistance before making a move.

Get an email alert each time I write an article for Real Money. Click the "+Follow" next to my byline to this article.
TAGS: Earnings | Investing | Stocks | Technical Analysis | Trading | Cybersecurity | Technology | Stock of the Day