About as welcome as a slap across the face. I got to my desk a little after 19:00 ET (7 pm) ET, after over-stuffing myself with what else? Stuffing and pie. Set up my screens. Figured I'd do some chartwork. I had been uncharacteristically lazy on Wednesday night, so I was already behind the eight ball. Flip on the tube. Hmm. Equity index futures were a little weak. Flip on the radio. Business talk from Asia. Whoa, this was going to get ugly.

Bad news? Well, it certainly is not good news. A new variant of the SARS-CoV-2 coronavirus had been identified in Botswana, and had been surging through the Johannesburg region of South Africa. The UK shut down travel from six southern African nations, while Israel moved to shut down travel from South Africa. They were too late. Only for a few hours had we even been aware of this new variant, but by early Friday morning, cases had popped up in Hong Kong, Israel, and Belgium. Anywhere else? Not that we know of, but of course... perhaps everywhere else.

The problem posed by this new variant is just how different it is from all of its predecessors. Thirty-two mutations on the spike protein. Is it enough to render the current vaccines being widely used ineffective, or less effective? We don't know. Is the variant more transmissible? More Lethal? We can't know.

That's what I refer to Pfizer (PFE) as. "Old Reliable." Not terribly volatile. Over a five year window, Pfizer runs with just a 0.67 Beta. Pfizer does this while paying shareholders $1.56 per year just to hang around. At Wednesday's closing price, Pfizer yields 3.1%.

Readers will recall that almost four weeks ago, Pfizer reported the firm's third quarter financial results. The firm crushed expectations for earnings that grew 86% and for revenue generation that increased 134%. It was the COVID vaccine, "Comirnaty'' that provided the boost. Ex-Comirnaty, Pfizer's sales increased just 7% year over year. At that point, the firm increased their full year revenue guidance to $81B to $82B from $78B to $80B. Pfizer also increased full year EPS guidance to $4.13 to $4.18 from $3.95 to $4.05. At the midpoints, this guidance illustrates earnings growth of 94% on revenue growth of 84%.

On Thursday, in addition to learning about this new variant, Pfizer received approval from the EMA to vaccinate European children between the ages of five and 11. The European Commission will likely render a final decision today (Friday). The U.S. and Canada had already issued Emergency Use Authorizations for five to 11 year-olds earlier this month.

I think it obvious that the vaccine stocks will do well on Friday morning, relative to everything else. The fact is that the messenger RNA vaccines are more flexible and can be tailored to meet the changing needs of society as threats change far more quickly than adenovirus-based vaccines or those based upon any other technology as well. This means Pfizer, Pfizer's German partner in developing Comirnaty... BioNTech (BNTX) , and Moderna (MRNA) . Everyone else will by necessity, be slower to react.

On that note, on Friday morning BioNTech said that it is already studying the effectiveness of its COVID-19 vaccine against this new (B.1.1.529) variant. A spokesperson for the firm said, "We expect more data from the laboratory tests in two weeks at the latest. These data will provide more information about whether B.1.1.529 could be an escape variant that may require an adjustment of our vaccine if the variant spreads globally."

In addition, Reuters reports that Pfizer said on Friday morning that if a new COVID variant emerges that current vaccines don't work for, that the company expects to develop and produce a tailor-made vaccine against that variant in about 100 days. 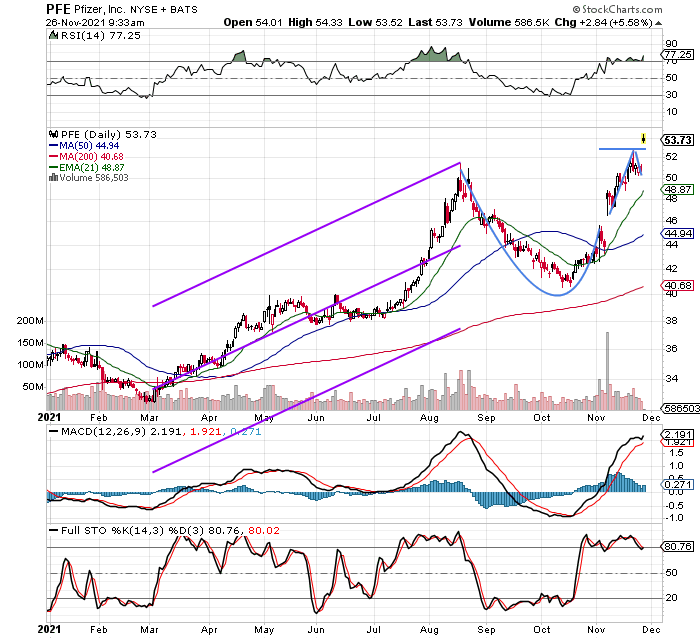 Readers will note that as PFE has stayed on an upward sloping trend, illustrated by our regression model, that a cup with handle pattern has developed over the past three months. It is now that PFE is actually attempting to break out past a $53 pivot. What I see as a negative will be both the gap created this morning as well as the $44/$46 gap created in early November that has been left unfilled.

My plan? Simple. Same as it has been since the start of this pandemic when I predicted that PFE would be first to market with a vaccine. Now, the firm has also created what appears to potentially be the most effective antiviral for those already infected. That plan is to stay long this name going forward. The virus is still in charge, and Pfizer can be flexible (with BNTX) and produce in mass. Add on weakness.

Get an email alert each time I write an article for Real Money. Click the "+Follow" next to my byline to this article.
TAGS: Economy | Investing | Markets | Stocks | Technical Analysis | Trading | Coronavirus