Earnings season. It is often said that the big banks bat lead-off. If so.... then it is PepsiCo (PEP) that throws out the first pitch. PepsiCo released results for the firm's third quarter financial performance on Monday evening. PepsiCo reported adjusted EPS of $1.79 on revenue of $20.19 billion. Both numbers beat Wall Street and present an earnings growth of 7.8% on revenue growth of 11.6%. GAAP EPS landed at $1.60. The firm enjoyed 9% organic revenue growth over the three month period.

Breaking results out by unit, PepsiCo Beverages North America is still the largest business, producing $6.402 billion in sales. up 7%, but falls to second place in terms of operating profit, where those produced $773 million. Frito-Lay North America (we love our salty snacks, don't we?) is the second largest business, with sales of $4.653 billion, up 6%, but actually accomplished more, turning over $1.357 billion in operating profit.

Now, the GAAP EPS number printed at $1.60. This is Wall Street, so we pretend we don't see anything except the adjusted print when the adjusted print looks better than the GAAP number. Check this out though. $1.60 is down from $1.65 for the year ago period. So, I go through the Income Statement to see what I can see. Everything looks fine and dandy as far as Income before income taxes. Then, PepsiCo gets zonked. Provision for income taxes for Q3 2021 hit the tape at $802 million, up from $526 million for Q3 2020. This is a 52.4% increase. As a percentage of income before income taxes, provision for income taxes increased from 18.56% for Q3 2020 to 26.34% for this most recent quarter. PepsiCo is doing fine. Their effective tax rate ambushed the firm's bottom line performance.

Cash, equivalents and short-term investment are all notably lower since the start of the year. Current assets however are up slightly over that time, as net accounts receivable are up significantly. That's fine as long as everybody pays their bills. Total assets are stable. There is no increased reliance upon goodwill. On the liability side, long-term debt has been reduced by almost 8% over nine months. We like to see that. Total assets are considerably larger than total assets less equity. However, current liabilities outweigh current assets. As you are starting to realize, I am not crazy about the balance sheet. I can forgive a weak quick ratio for a beverage/snacks giant as there will always be an abundance of inventory. However, I will never get cozy with a current ratio of less than one.

For the full year, PepsiCo now expects to deliver organic revenue growth of 8%, up from prior guidance of 6%. The firm also sees 12% core (or adjusted) EPS growth, 11% in constant currency. It might be key to note that despite my above observation, PepsiCo left prior guidance for a full year effective tax rate of 21%-ish, right where it was. 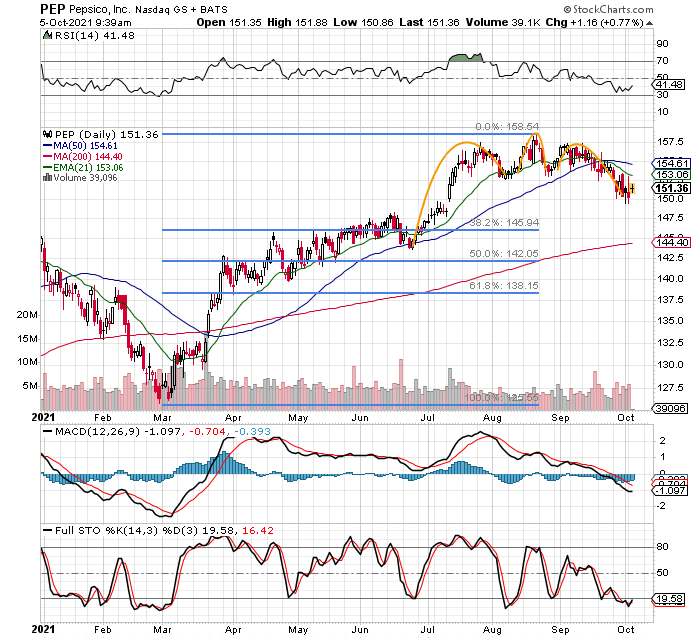 PepsiCo was up a bit Tuesday morning. I am having a little trouble with this chart. I wanted to call what you see a "basing period of consolidation, except there is no bottom line support for the range. Though the three peaks are nearly symmetrical in height, I think this may qualify as a "head and shoulders" pattern, which is a bearish reversal type pattern when coming off of a rally which we have from March into mid-summer.

PepsiCo is a defensive style name, and pays shareholders $4.30 (2.86% yield) just to hang around. There will be at least a bit of allocation rotation in PEP's favor as markets continue to be rattled by a number of potentially negative inputs. The FSO appears oversold, but the RSI is nowhere near such a reading. The daily MACD has all three averages below zero, but it's not awful looking.

My personal thought is that with a beta of 0.62, this is not a bad place to hide some dough. That gap in the $149's from early July filled last week, which is a positive. I can easily see the shares seeking out our old pal Fibonacci around $146, and I already told you that I don't love the balance sheet.

If straight equity is your game, you could do worse than PEP. Personally, I would rather get paid a premium to take on equity risk at a discount. For me, the $145 PEP puts expiring November 19th that will pay me almost $2 looks more attractive than laying out $150+ for a stock that I don't think will go up that much unless it sells off further first. It's a risk management thing.

Get an email alert each time I write an article for Real Money. Click the "+Follow" next to my byline to this article.
TAGS: Earnings | Investing | Stocks | Technical Analysis | Trading | Beverages | Food & Drink