Nike (NKE) reporting last night after the bell was a bit of bad luck. With the market facing some heavier than usual selling pressure to end the week, there have been no bargain buyers for Nike shares on Friday. The stock opened down a couple of bucks and has tailed lower a couple more as market weakness prevails.

With the start of NCAA March Madness, I've seen a few references to the infamous Nike Breakaway Shoe (hat tip to Jeff Macke on coining the phrase), but for the most part it seems those concerns have faded quickly. As I mentioned after it happened, it was a freak accident. It's not as if we've seen a bunch of shoes spontaneously burst into flames. And the incident appears to have had no impact on Nike's guidance. Again, not shocking.

Overall, I viewed Nike's results as good, not great. But good is also not bad. After a 20% move higher to start the year, it's no surprise that good results are sold, especially on a weak day. The company's EPS came in just ahead of expectations while revenue was basically inline. When we're talking about results in the billions, the revenue "shortfall" of $10 million is a rounding error, nothing more. The three cents beat on earnings per share is slightly more impressive. Nike is flexing its margin muscles with direct-to-consumer and digital growth. Unfortunately, the continued pursuit does come at a cost. Higher SG&A expenses will offset some of that top line growth and high margins. The result is high single-digit revenue growth for next year.

Before factoring foreign-exchange (FX), Nike posted revenue growth of 11% in the most recent quarter, however, that was reduced to 7% because of FX, so guidance basically falls in line with current performance. FX generally fluctuates enough that I give it little weight on quarter-to-quarter impacts to a company's results. If they become consistent, then I'll consider modeling them, but Nike is a global company. What hurts today may help tomorrow. I'd prefer to focus on the core.

The company is winning back share from Adidas (ADDYY) with its Air Max line and there is optimism for the upcoming KD12 and Giannis shoes. Converse continues to be weak in the U.S and Europe which offsets its strength in China. Given the potential iconic nature associated with "Chuck Taylors" that I'd love to see the brand re-imagined in the U.S. I believe it is an opportunity if marketed correctly. If there is one thing Nike has, it is a strong marketing budget.

Heading into earnings, Nike offered an attractive pattern for bulls. Attractive, but not an active buying pattern. The stock had created a bullish cup and handle pattern, but required a weekly close above resistance (roughly $87.50) to trigger. Today's drop has put the pattern into question. Above $85 and bulls are still in charge. When the price is between $82 and $85, we have an unclear technical setup. A close under $82 and bears can push the stock lower by at least $4 without a ton of resistance. Unfortunately, multiple secondary indicators are rolling over as well. 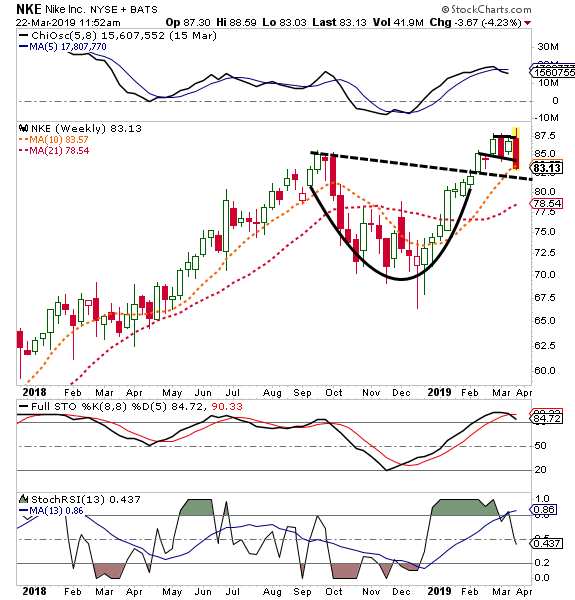 When examining the results in conjunction with the charts, I don't see a reason to buy the dip here. If Nike pushes below $82, bulls could be in real trouble. Should buyers come back into the stock, then a close above $87.50 would trigger the bullish cup and handle pattern. Upside should take Nike to $100. I'd rather give up $4.50 here to feel better about my odds of making $12.50, then try and capture every penny of upside and fighting an unclear pattern and negative overhang from earnings.

Get an email alert each time I write an article for Real Money. Click the "+Follow" next to my byline to this article.
TAGS: Earnings | Economy | Investing | Markets | Stocks | Technical Analysis | Trading | Retail | Sports business | Stock of the Day