How 'bout that? Can almost hear that phrase in Mel Allen's voice. Controversial billionaire Elon Musk has long used Twitter's (TWTR) social media platform to communicate to his followers (numbering more than 80M) about his businesses, including Tesla (TSLA) , SpaceX, and transportation company The Boring Co., as well as to sometimes goof off or seemingly joke around. In a 13G filing with the Security and Exchange Commission released on Monday morning, Elon Musk Revocable Trust (Elon Musk is the sole trustee) revealed ownership of 73,486,938 shares of Twitter, which based on Twitter's annual report, published in February, is good for a rough 9.2% "passive" stake in the firm. This makes Musk, Twitter's largest outside shareholder.

This is interesting because though Musk has long been a frequent user of Twitter's platform, he has recently been critical. On March 27th, Musk tweeted, "Given that Twitter serves as the de facto public town square, failing to adhere to free speech principles fundamentally undermines democracy. What should be done?" This was no one time rant. On March 30th, Musk polled his Twitter following, asking if the public thought that Twitter's "algorithm should be open source." This was followed up on by former Twitter CEO Jack Dorsey who retweeted that poll. Finally, on March 31st... Musk tweeted out another poll asking, "Free speech is essential to a functioning democracy. Do you believe Twitter rigorously adheres to this principle? The consequences of this poll will be important. Please vote carefully." About two million of Musk's followers did respond. Over 70% of them voted "no."

It is apparent that Musk meant it when he mentioned that the consequences of the poll were important. He obviously meant to do something about it, being that he had indicated in the past that he would like to start his own social media platform. Five star (rated by TipRanks) analyst Dan Ives of Wedbush sees the stake as a potential precursor to a full blown takeover bid.

The stock? Oh, TWTR is up huge in Monday trade. I had been day trading the stock early on, prior to knowing that I would be writing about Twitter. I am currently frozen in time with a small long position, as I can not resume trading the name until after this piece hits publication.

Twitter will not report first quarter earnings for another three and a half weeks. Currently, Wall Street is looking for EPS of $0.03 (within a range of $0.15 to $-0.49) on revenue of $1.23B. (within a range of $1.17B to $1.31B). If realized, these expectations would show earnings contraction from $0.16 for Q1 2021, but revenue growth of 19.3%. This sales number would be the continuance of a deceleration of annual growth that over the past three quarters after peaking at 74%, has tailed to 37% and 22% successively. The stock closed on Friday at $39.31, which is about 47 times 12 month forward looking earnings, and six times trailing 12 months' sales. About 5.6% of the entire float, at least three weeks ago, was held in short positions.

Twitter posted cash from operating activity for the fourth quarter of $632.7M, and cash from Investing activity of $52.6M. Then, the firm takes a hit ($-472.8M) from financing activities, and then there is a negative impact from exchange rates. Ultimately, for the quarter, Twitter ran with levered free cash flow of $205.6M.

Turning to the balance sheet, Twitter ended the quarter/year with a net cash position of $6.393.7B, which was down more than $1B from the previous quarter. This took current assets down to $7.918.4B as accounts receivable and prepaid expenses partially offset the drop in cash. Current liabilities also dropped significantly to $1.343.9B. This left Twitter with a current ratio of 5.89, which is shockingly healthy. By year's end, total assets had increased to $14,059.5B, and compared to total liabilities of $6.752.3B. One item of note, long-term debt jumped to $4.353B. I know, still "small" enough to be covered by the net cash position, but also growth of about $1.7B over three months' time.

The balance sheet easily passes the Sarge test and appears, in my humble opinion... to be far healthier than does the underlying business. Twitter, as of December 31st, had a tangible book value of $7.44 per share. 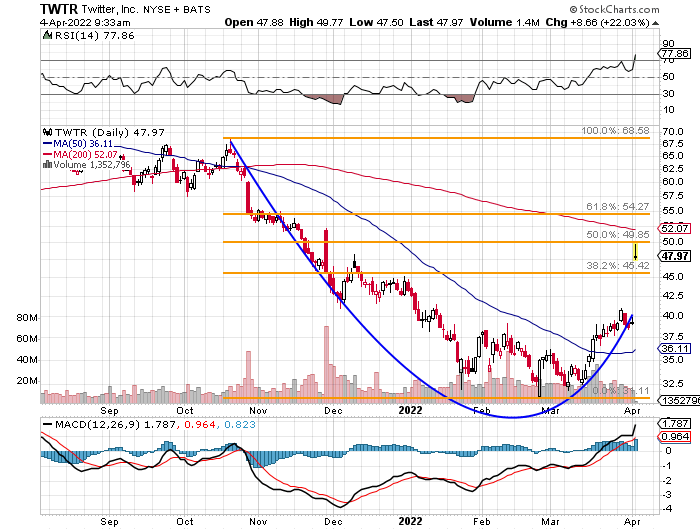 Readers will note that TWTR had tested the $31/$32 level on four occasions, confirming that as a level of support as the shares formed a rounded bottom. This created what looks to me to possibly be a developing cupping pattern. The shares were trading with a $48 handle in pre-opening action, which would create a gap that may have to fill at a later date, while also threatening to retrace a full 50% of the October through late February selloff. This could, with a little more push, put TWTR's 50 day SMA ($52.14) in play as well.

In my head, I am rationalizing the asset that association with Elon Musk would certainly be for Twitter, and weighing that against the fact that the stock was already expensive on Friday night. I am trading the name today, and that's all good and well. Can one invest in Twitter here? Much tougher question. The silent voice inside my head wants me to short TWTR when I get the chance, but I definitely bat less than .500 when I bet against Elon Musk. To get long and stay long, I would need a discount in order to feel comfortable.

An investor interested in getting long TWTR could buy 100 shares of common stock at close to $48,and sell one May 20th $55 call option against that position for about $2.10. Another investor could just write one TWTR May 20th $46 put for about $3.40. That takes the potential for equity risk down to a net $42.60.

Get an email alert each time I write an article for Real Money. Click the "+Follow" next to my byline to this article.
TAGS: Takeover Possibility | Investing | Markets | Stocks | Technical Analysis | Trading | Elon Musk